The Woman Who Married An Owl

It's starting to feel like fall here in Boston. The days are getting shorter and the temperatures are slowly dropping. This story from the Passamaquoddy of Maine somehow seems appropriate. A little bit creepy, a little bit magical.

Once upon a there was a beautiful young Passamaquoddy woman. Her father was very protective of her and didn't think any man was good enough for her. To keep men away he set up a special challenge that any suitor needed to meet.

"If you want to marry my daughter," he said, "You must do the following: when you spit into a fire, the flames must flare up. Sounds easy, doesn't it?" But he knew it was impossible. Saliva would dampen a fire, not make it burn brighter. Many men tried to win his daughter's hand, and they all failed.

The father didn't know it, but the Horned Owl also wanted to marry his beautiful daughter. He had watched hidden in the trees as all the other men failed, but he was determined to succeed. He went to his aunt, who was a powerful owl witch, for assistance.

"Drink this," she said, pouring a potion into his beak. "You'll definitely win that beautiful girl!"

After swallowing the potion the Horned Owl turned himself into handsome young hunter. Then he went to the Passamaquoddy father's lodge and announced himself. The father laughed at him.

"You can try," he said, "but you'll never win my daughter. Spit into the flames!"

The Horned Owl spit into the flames. His aunt had spoken true. As soon as his saliva hit the fire, it roared upwards towards the ceiling of the lodge, out through the chimney hole, and high into the night sky. The father scowled, but he gave his daughter to the Horned Owl. The beautiful woman was happy, though. This mysterious young hunter was quite handsome after all...

The Horned Owl brought the woman to his lodge, and they consummated their relationship. They both fell asleep afterwards, but in the middle of the night the woman woke up. A feeling of dread overcame her as she gazed at her husband in the firelight. Huge, feathered ears protruded from his hair, and his eyes were half-open even though he was deeply asleep. As she stared at his eyes his pupils shrank to narrow slits. Her new husband had the eyes of an owl. 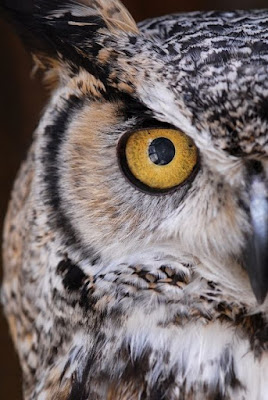 Realizing that her husband was not human, the woman fled from his lodge in terror, screaming as she ran back to the safety of her father's home.

The Horned Owl was quite angry, but determined to get his wife back. He once again turned himself into a young hunter, but with a different appearance. He killed many moose and deer and brought them to the woman's village.

"Hello!" he said. "I'm a lonely hunter wandering through these woods. I have plenty of game to share. Can I become a member of your village?"

The beautiful woman and her father were suspicious, but the other villagers dismissed their fears. This hunter looked perfectly normal to them, and he seemed very generous. And who doesn't like free food?

The villagers cooked the game and had a big feast. Everyone had a great time, and as the night wore on they took turns telling scary stories. Eventually it was time for the beautiful young woman to tell the story of how she married an owl.

"This story is really scary," she said, "so I don't want to speak too loudly. I need to whisper. Can everyone pull their hair away from their ears so they can hear me better?" She looked pointedly at the young hunter.

Everyone exposed their ears, except for the young hunter, who refused. The villagers teased him and yelled at him  until finally he pulled back his long hair. He had huge, feathered ears that stood up like horns. The villagers fled in panic back to their homes, screaming.

In dejection the Horned Owl flew home. He thought he'd never get to see his wife again. His witchy aunt had other ideas, though.

"Nephew be patient," she said. "In time she will forget her fear, and when that time comes you will lure her to you with music." She handed the Horned Owl a magical flute that played irresistibly beautiful sounds. He took the flute. Then he waited...

The beautiful woman and her father moved their house to the center of the village because they knew the Horned Owl was lurking somewhere out in the forest. But as the weeks passed the woman became less cautious. She hadn't seen any sign of her sinister husband. Perhaps he had moved on to other prey? Over time she slowly began to venture towards the outskirts of the village, until finally one day she went out into the forest itself.

After walking through the forest for a while she stopped to rest under a big tree. As she sat there she thought she heard a flute, softly at first and then louder and louder. It was the loveliest music she had ever heard, although somehow haunting. It seemed to be coming from somewhere high above her.

"I would willingly go with whoever is playing that flute," she said. "It's the most beautiful thing I've ever heard."

As soon as those words passed over her lips she heard the sound of huge wings above her. The Horned Owl flew down and grabbed her gently in his huge talons. He carried her off to the village of the owls, where she lived happily for the rest of her life.

I found this story in American Indian Myths and Legends, which my in-laws gave to me recently. (Thanks Guy and Phyllis!) I think it also appears in Charles Godfrey Leland's book of Passamaquoddy stories from the 1800s.

Actually, I think it's rather sweet. There are plenty of animal/cursed bridegroom stories around, but usually the girl has to suffer quite a lot before she gets her happy ever after. Cupid and Psyche, East Of The Sun West Of The Moon, Beauty And The Beast, The Singing Springing Lark(a cross between Beauty And The Beast and East Of The Sun) and such. In this one, the young man works at winning her back, even if he is an owl. And he has a nice auntie to help him.

Good points Sue! I didn't make the connection between this story and those classic fairy tales.