This weekend my friend Lori and I took a little tour of Marblehead, Massachusetts.

I don't use the word charming too much, but Marblehead is probably one of the most charming towns I have ever been to. Charming old 18th century homes everywhere, charming narrow streets, and of course a charming location on an isolated peninsula.

This might come as a surprise, but Marblehead was much beloved by the famous horror writer H. P. Lovecraft. Lovecraft was obsessed with the 18th century, and raved to all his friends about the town's historic architecture. 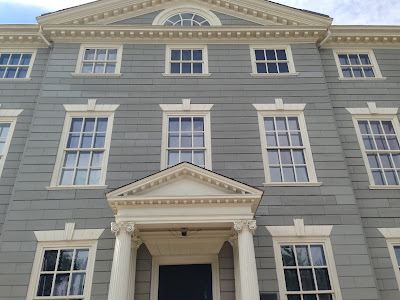 Lovecraft showed his love in a strange way - by setting several of his stories in a thinly fictionalized version of Marblehead that he called Kingsport. Probably the most famous of these is "The Festival," which tells how a young man comes to Kingsport to celebrate the winter solstice with distant relatives he has never met before.

Here's how Lovecraft describes the town:

... Kingsport with its ancient vanes and steeples, ridgepoles and chimneypots, wharves and small bridges, willow-trees and graveyards; endless labyrinths of steep, narrow, crooked streets, and dizzy church-crowned central peak that time durst not touch; ceaseless mazes of colonial houses piled and scattered at all angles and levels like a child's disordered blocks...


It all sounds very quaint on the surface but - surprise! - by the story's end the narrator is descending deep into the earth with a horde of semi-human cultists to celebrate ancient unspeakable rites:

... I saw some side passages or burrows leading from unknown recesses of blackness to this shaft of nighted mystery. Soon they became excessively numerous, like impious catacombs of nameless menace; and their pungent odor of decay grew quite unbearable... I shivered that a town should be so aged and maggoty with subterranean evil.


And that's how H. P. Lovecraft shows his love for a favorite town!

But all kidding aside, I think this story demonstrates the dual fascination people feel about this part of the country. On the one hand it's old, quaint and charming, but on the other hand some creepy things definitely happened here in the past and many people feel like they have left their imprint on the landscape. It's no accident that so many horror stories are set in New England, or that America's three greatest horror writers (Poe, Lovecraft and King) all were born here. 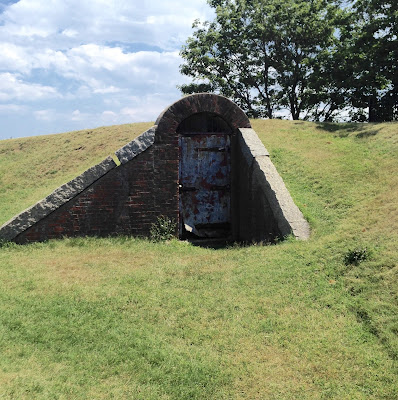 Marblehead these days is a very posh and charming town, but when it was founded it was a rough-and-tumble fishing town full of unchurched sailors. Some old European folklore survived in Marblehead longer than in other parts of New England, and several famous witches (Mammy Redd, Edward Dimond and Moll Pitcher) were also born in the town. And those tunnels Lovecraft wrote about may not just be fiction... 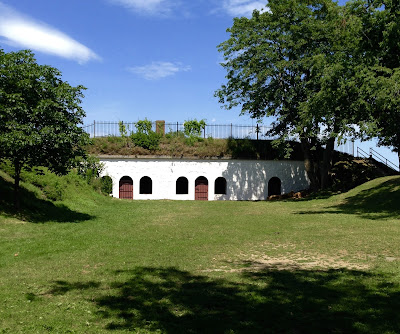 On our Marblehead trip Lori and I decided to first visit Fort Sewall, which was built on a bluff overlooking the ocean in the 1600s. The fort was expanded and renovated in the 1700s, and played a key role in the War of 1812 when its cannons saved the U.S.S. Constitution from being attacked by British warships. The fort is now a public park and on the National Register of Historic Places.

Something we didn't see on the trip were the caves located in the cliff underneath the fort. According to Pam Matthias Peterson's Marblehead: Myths, Legends and Lore there are caves in the cliff which were used in the past as a hiding place for smugglers. These caves would flood at high tide, and the town sealed them up to prevent people from being trapped inside and drowning. That sounds like a good idea to me. 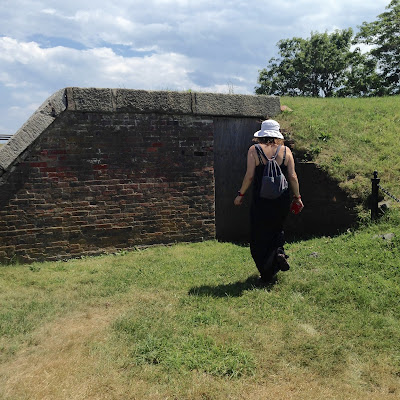 Peterson also writes that according to local legend a vast network of tunnels runs beneath Marblehead, and even connects the caves to the main town. These tunnels were supposedly used by the smugglers to carry on their business undetected by the British. Peterson claims the tunnels are mostly just a legend, but at least one house in town (the King Hooper mansion) does have a sealed-off doorway in its cellar. Perhaps there is a kernel of truth behind the subterranean tunnels in Lovecraft's story after all? 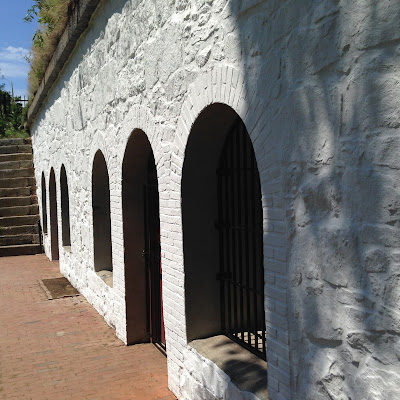 Smith said he has twice captured a voice at the site yelling, “Help!” And another time, when Smith was alone at the fort, he said he recorded a voice asking a question, “as though a person were standing behind him.”

“There’s definitely something going on here,” Smith said as he setup equipment for the night’s investigation. “We just haven’t collected enough data to prove what that something is.”

From this November 2013 WCVB article.


Smith wasn't sure what's causing the haunting. The fort has a long history, but no particular tragedy is connected to it.

It does have a dungeon, though, so there was undoubtedly a lot of misery associated with it. The dungeon and the other rooms are sealed off with iron bars, but we were able to see inside. They look like a good place for ghosts to hang out. 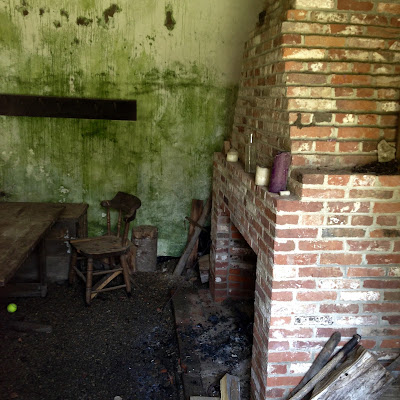 If you want to watch Nick Smith and some colleagues investigate the fort you can find a video on YouTube. The beginning does feature the voice saying "Help me", which is pretty spooky.

Next week I'll post more about Marblehead, including its most famous ghost. Stay tuned!

Sounds like an amazing place! And so much history. Maybe the ghostly voice is of someone trapped in those caves long ago? ;-)

Hi Sue! Read on for more weird Marblehead in this week's post.

My friend and I sometimes took Cape Ann HPL trips, and Marblehead was much fun, especially the hilltop cemetery where we searched in vain for signs of ghoul-doors. Both of us knew the topography was nothing like that as portrayed in "The Strange High House in the Mist" -- which gave Kingsport a steep sea-side cliff at least hundreds of feet high -- and we were disappointed to find that Marblehead was even flatter than we could imagine :-) . It was easier making Essex into Innsmouth.

On tunnels: the human mind certainly likes to imagine tunnels whenever possible. I would like to read a psychological essay on the subject. During my folklore collections in Ireland I often came across this belief (or motif, in folklore-speak), usually when there was a prominent ancient ruin around. In Ireland there actually were tunnels on occasion, short ones, built under early medieval ring-forts (fortified farmsteads) for hiding people and valuables, and maybe to keep milk cool. They were sometimes found long after the dirt ditch eroded away, a tunnel of stones in a field, usually filled up by the annoyed farmer, but also making its way into folk tradition. Irish folk tradition often posited extraordinary tunnels, though, going for miles, or thousands of feet, under rivers, bedrock, etc. At this point the human need for tunnels has overpowered hsitorical fact, and folk-psychology comes into play.

Here is a more common example from Howley's Follies and Garden Buildings of Ireland: "The castle [MacDermot’s Castle] was used for dances and parties, and local legend claims there was once a tunnel linking the island to the shore. Such a feat of engineering would have presented an almost impossible challenge in rural Ireland during the nineteenth century. it is more likely that the rumors were stimulated by the surviving extensive network of tunnels and storage chambers built near to the house. These accommodated the delivery and storage of fuel and provisions, all discreetly hidden to avoid despoiling fine views from the house." (Howley 1993: 99). The motif also extends to English folklore: "Near every ancient castle, cathedral, abbey, or hall, the common people have tales of underground (vaulted) roads, sometimes to great distances." (Balfour 1894, 160 -- sorry, lost the title citation; probably an early folklore journal). Seldom is early American architecture this complex, though.

I have wanted to speculate on a psychology of the cthonic, but I don't have the machinery for that right now!

There are also supposed to be tunnels under Boston's North End. I have read the old newspaper accounts of workmen uncovering one while renovating a street (it was already partially filled in with rubble when they found it) and an architectual guide to Boston refers to a tunnel entrance underneath an old brick house near the Old North Church. According to local tradition these tunnels were part of a vast network used by smugglers, but I am not sure in reality how extensive the tunnels really were. But it has been a densely settled area for about 400 years, and it might not take that much work to tunnel between the cellars of closely packed houses. Of course Lovecraft portrayed these tunnels as part of a vast network that ran underneath all of Boston in "Pickman's Model", and perhaps even went as far as the Dreamlands?

I am sure there is some psychology of tunnels at work in these stories. Have you read any of Alan Moore's recent comic PROVIDENCE? One character hypothesizes that the historical past and our subconscious are both physically located in the ground beneath our feet.

Have you ever visited Dungeon Rock in Lynn? It is the most impressive and atmospheric tunnel I have ever visited. Corkscrew-shaped and descending about 300 feet down through solid rock, it was carved by a man named Hiram Marble under the direction of a dead pirate's spirit who told him there was treasure at the bottom. Marble never found the treasure but the tunnel remains. The park rangers seal it at night with an iron door. To keep people out or keep something in?

I know a guy who said he and his friends found an entrance to the tunnels in the basement of the old Middle School.

Many places are connected by tunnels in Salem. The old Crowninshield lot on Peach's Point still has a cave on the water leading under the house. Many other homes are connected to the tunnels. Then in Salem there is 3 miles of tunnels used to avoid paying customs and smuggle booze. Read "Salem Secret Underground:The History of the Tunnels in the City" and "Sub Rosa" to find out more info.