The Ghost of Ram Tail Mill

This Sunday Tony and I made an excursion down to Foster, Rhode Island to visit the Ram Tail Mill ruins. What better way to spend a sunny spring day than visiting a notorious haunted ghost town?

Ram Tail Mill was founded in the 1813 by William Potter, Peleg Walker, and several other partners. The mill was powered by the nearby Ponangansett River, and mechanically spun and wove woolen cloth. Wool comes from sheep which is why it was called the Ram Tail Mill. 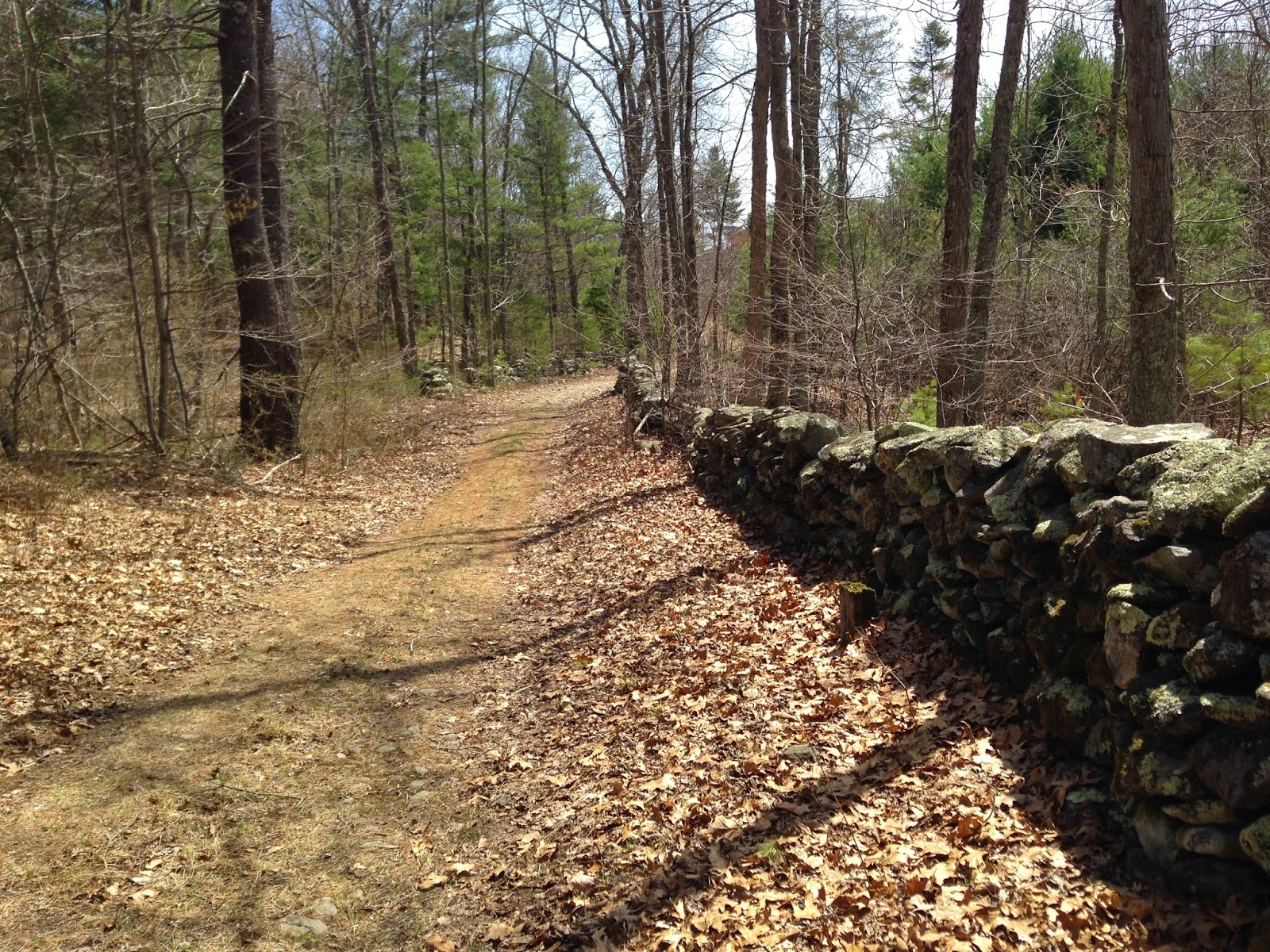 William Potter's two sons managed the operations in tandem with Peleg Walker. Walker was supposedly a cranky, disagreeable man, but managed to find his niche as the mill's night watchman. He would patrol the mill buildings with a lantern in his hand, and then ring the bell after sunrise when it was time for the workers to start their day. Things went well for several year and a small village formed around the mill.

There was always tension between Peleg Walker and the Potters, but at some point it erupted into a major argument. Neither legends or historical records indicate what it was about, but it was bad. It ended with Walker shouting, "You'll have to take the key to this mill from a dead man's pocket!" 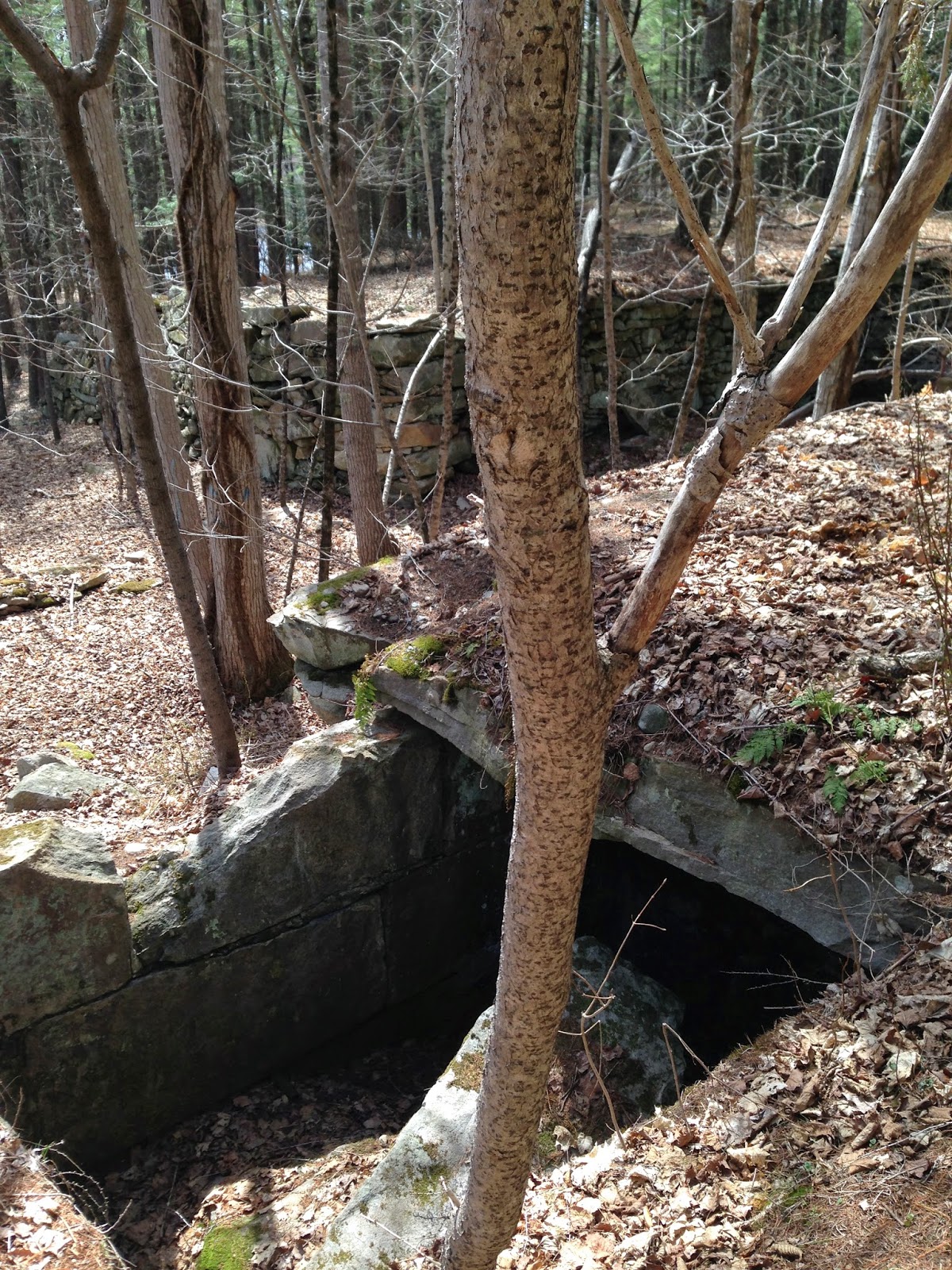 His warning came true. On the morning of May 19, 1822 the bell did not ring. When the puzzled workers arrived from their houses they found Peleg Walker hanging dead from the bell rope. The key to the mill was tucked into his pocket. Walker was 35 years old.

The locals assumed Walker was a suicide and buried his body nearby. Operations resumed at the mill, and with the cranky night watchman gone the atmosphere at Ram Tail was much calmer. But one night the workers and the Potter family were awakened by the mill's bell ringing wildly. They ran to to investigate but found the mill was empty. The bell was ringing on its own. 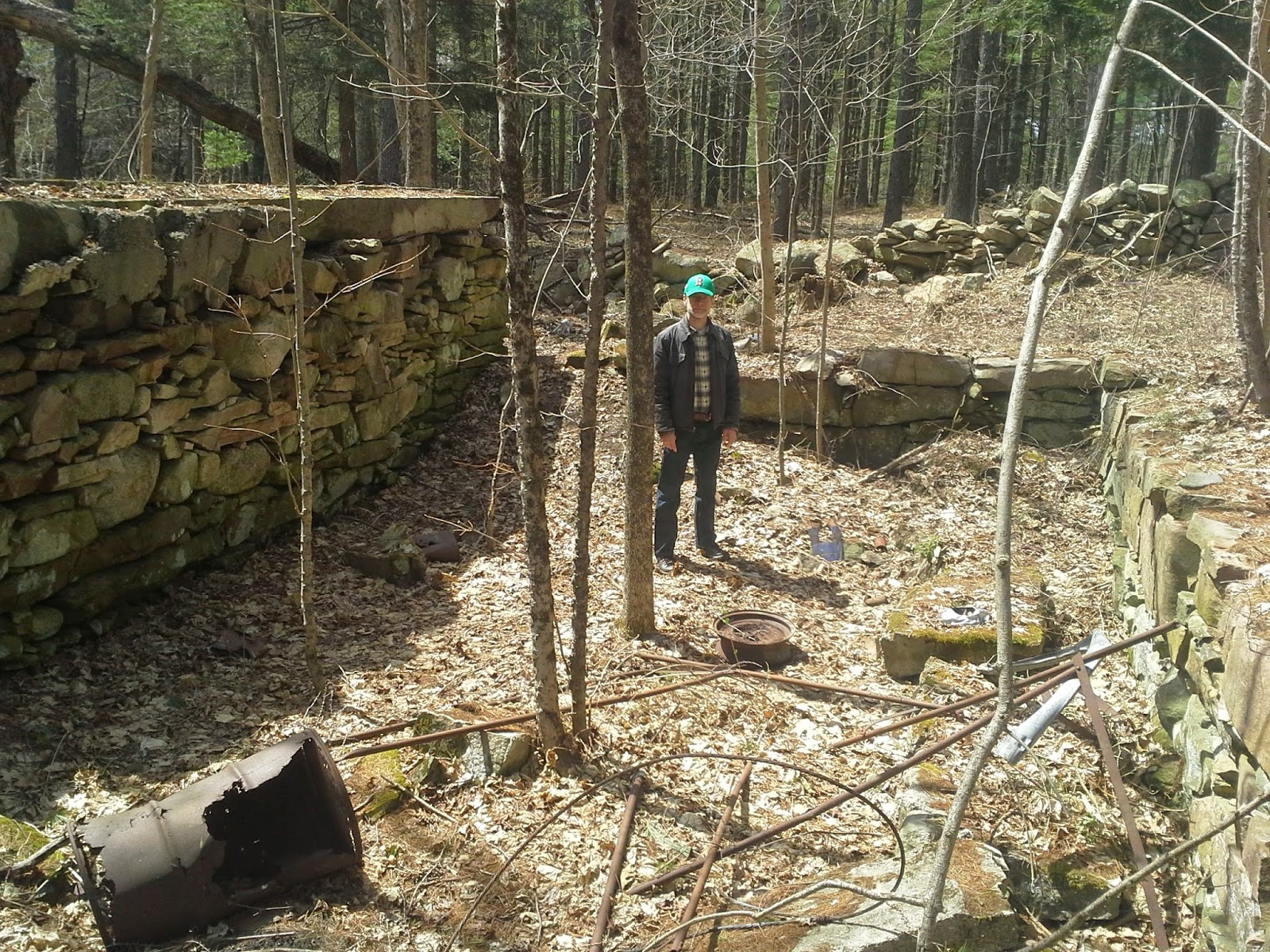 The mysterious ringing happened on several other nights (usually at the stroke of midnight) until the Potters took down the bell rope. Maybe the rope was just blowing in the wind? This didn't help - the bell still would ring late at night. They finally removed the bell itself.

This brought peace for a short while, but other strange things started to happen. The water wheel moved backwards, against the flow of the river, and the mill's machinery would run by itself late at night. Even worse, someone could be seen walking around the mill at night carrying a lantern. It looked suspiciously like Peleg Walker...

Fearing that the mill was cursed, the workers began left to find other jobs. Without anyone willing to work there the Potters were forced to shut it down. The little village was abandoned and became a ghost town. No one lived there anymore, but Peleg Walker could still be seen wandering through the empty buildings late at night. 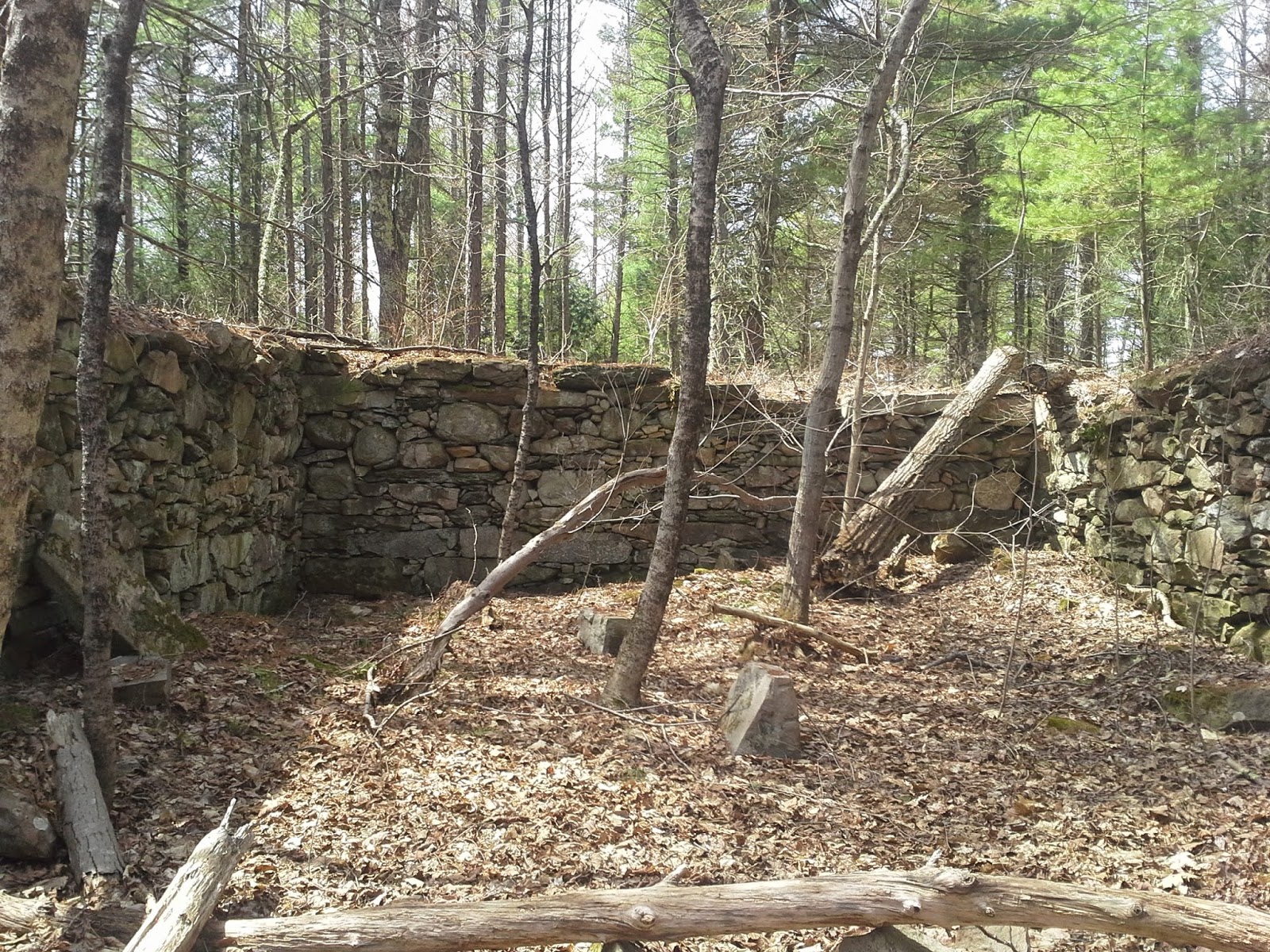 The mill burned down in 1873 but kept its reputation as a haunted location. In fact, the 1885 Rhode Island census lists the Ramtail Mill as haunted, making it the only officially haunted place in the state.

We did not see Peleg Walker's ghost, but we did have one weird thing happen to us. As I was taking a photo of the trail that leads directly to the ruins, my phone's camera went a little haywire. The screen just turned blinding white. This happened to me one other time that day. The same thing happened to Tony, but he didn't notice until we got home that some of his photos were all white. Supernatural phenomenon or just a camera malfunction on a bright sunny day?

I definitely felt a little creeped out as we explored the ruins, but it could have just been my fear of deer ticks combined with a very quiet forest. We only saw two other people, and when we asked them if they knew where the mill was they told us they didn't even know there was such a thing. It was really quiet there.

The conservation land is very beautiful and has some amazing stone walls that run along the main trail and into the woods. The walls are covered in lichen, as was the ground at a nearby historic cemetery where we found the graves of some members of the Walker family. (Peleg Walker is buried in another cemetery about a mile away.) 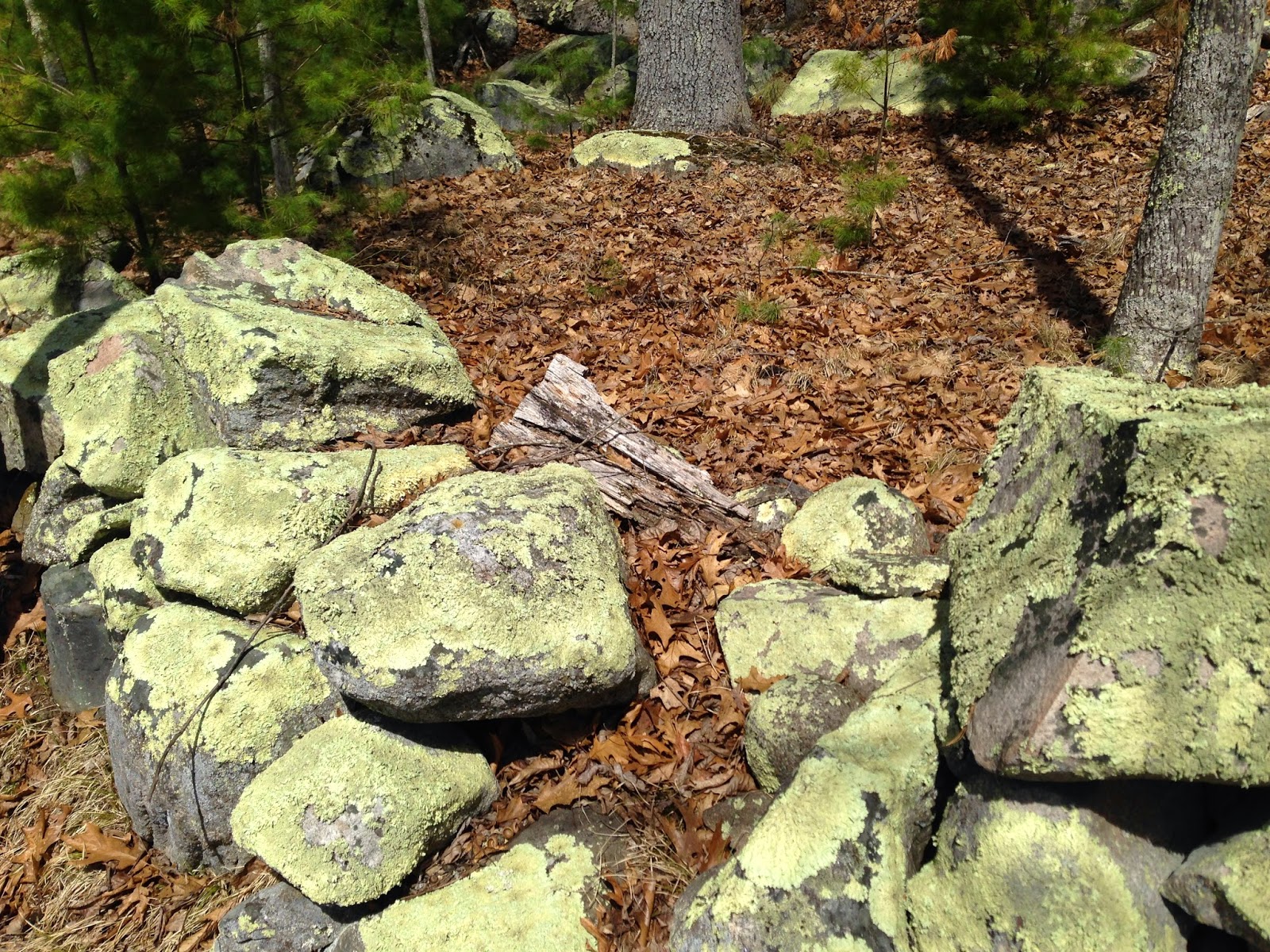 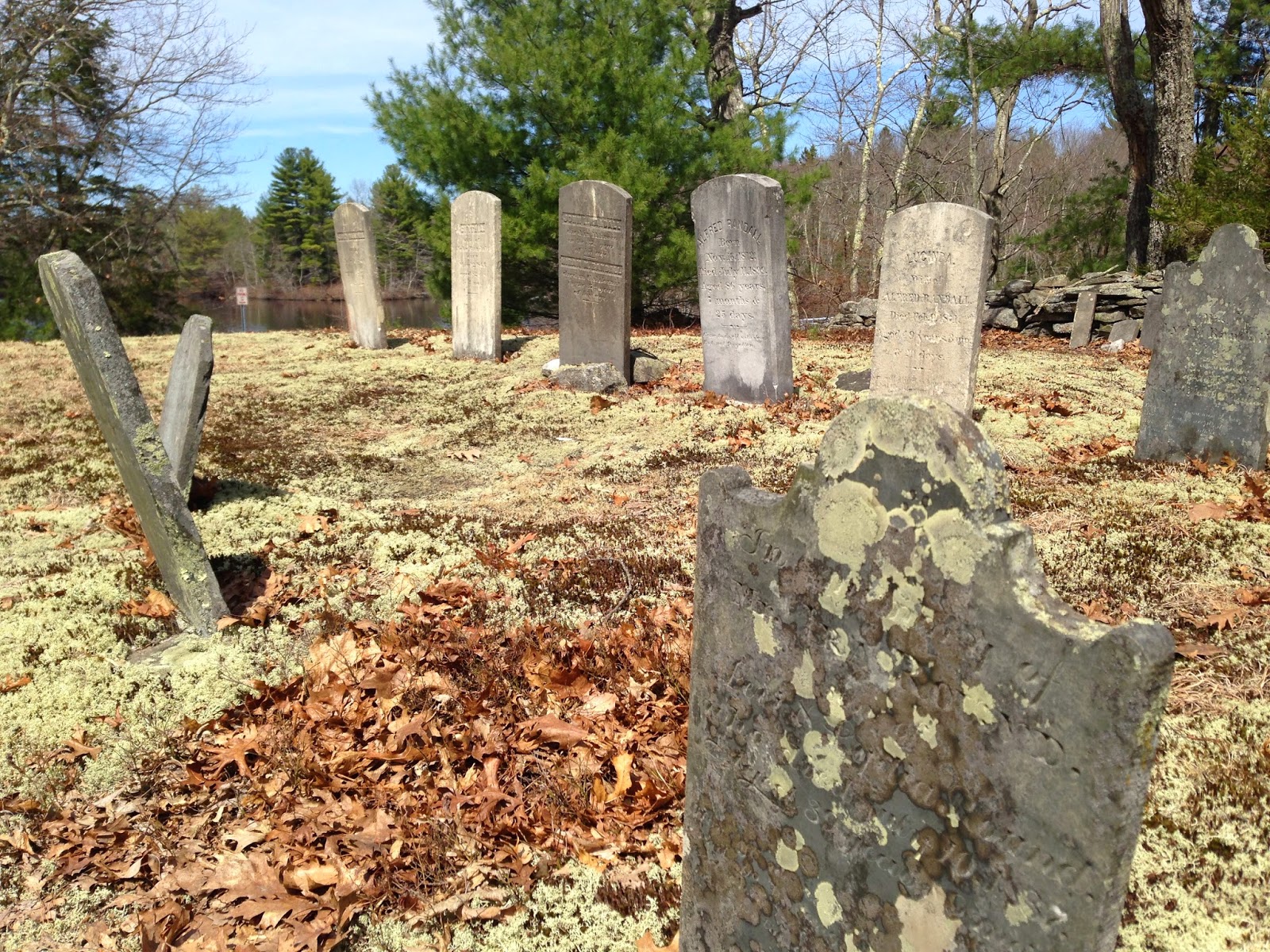 DIRECTIONS: I've read some accounts online of people having trouble finding the ruins, but we got there relatively easily. Take Route 6 west from Providence until you reach Foster. Go south on Rams Tail Road. You'll know you're going the correct way because you'll pass a cemetery on the left. Rams Tail road becomes a dirt road for a while, but when it ends take a left on Central Pike. A short way down the road you'll see the trail entrance with a fire gate on your left. There is space for one or two cars to park.

That Hopkins Mill cemetery you passed supposedly plays host to some activity as well. I remember taking some photos there back in college that showed weird greenish mists and spots of washout (much like the all white shot you posted).

I also had similar issues at the site of the old mill village itself. One of the photos I took showed the robust wall of a huge stone building that was most certainly NOT there when the picture, intended as a macro of the river bank, was taken. Unfortunately, that print is in the custody of my ex, whom I no longer talk to, so you'll have to take my anonymous word for it ;-)

Thanks for sharing! I have seen some photos online of that greenish mist which were taken at the mill site. Really weird stuff... Are you a ghost investigator? I am not,but there are definitely a lot of interesting stories about that site.

I wouldn't call myself an investigator, but I did spend a lot of time hanging out at abandoned/historical/allegedly haunted places in Rhode Island (there are a LOT of places like that here) during my college years. When it comes to the paranormal, I'd say I'm at least a buff.

Now hold on just a minute... the townsfolk came to investigate after the bell didn't ring and found Walker hanging from the bell rope? That doesn't add up. Wouldn't hanging himself (or being hung) from the bell rope cause the bell to ring? How could he (or anything else of the approximate size and weight of an adult male human being) hang from the rope without pulling on it? Not only should it have rung, it should've had continued ringing (albeit somewhat erratically and possibly with less force than usual) the entire time he was hanging there.

Thanks for the comment! Mysterious are the ways of folklore. Maybe he hung himself very gently, or the bell was really, really big? Or maybe it just makes the story more dramatic.

If you continue straight at the 4-way intersection, you come to the mill on your left without having to walk up the hill. Also, I, too, had one picture that came out solid white. Strange stuff.

If you continue straight at the 4-way intersection, you come to the mill on your left without having to walk up the hill. Also, I, too, had one picture that came out solid white. Strange stuff.

I Just would like to point out, That it is on reservoir property.

IMPORTANT: Please note that these are NOT the directions to the Ram Tail Mill, but the Round Family Farm. My first clue was that there was no water anywhere to power a water wheel! This is on Providence Water property, a No Trespassing sign is posted, and according to an adjoining property owner, if you are caught, you will be ticketed.

Our Webroot Geek Squad Agents provide repair, installation and setup services on all kinds of tech at more than 1,100 Best Buy stores – including computer & tablet repair, setup and support, TV & home theater repair, car stereo & GPS installation, cell phone repair and home appliance repair. We fix most makes and models, no matter where you bought them and can show you how to get the most out of your technology. Want to fix any gadget issue? Our Trend Micro Geek Squad team is here to provide you with seamless services for your faulty devices. Geek Squad has set the benchmark when it comes to office or home appliances repairing. Our experts get acquainted with some exclusive technologies for hardware or electronic device issues. We can fix all the hindrances that can’t be solved by a typical customer support approach. The specialized touch of our technicians resolves the problem immediately.

Our Webroot Geek Squad Agents give fix, establishment and arrangement administrations on a wide range of tech at in excess of 1,100 Best Buy stores – including PC and tablet fix, arrangement and backing, TV and home venue fix, vehicle sound system and GPS establishment, phone fix and home machine fix. We fix most makes and models, regardless of where you got them and can tell you the best way to benefit pharmenvee from your innovation. Need to fix any device issue? Our Trend Micro Geek Squad group is here to offer you with consistent types of assistance for your defective gadgets. Nerd Squad has set the benchmark with regards to office or home apparatuses fixing. Our specialists get to know some elite advances for equipment or electronic gadget issues. We can fix all the impediments that can't be understood by a normal client assistance approach. The particular bit of our professionals settle the issue right away.

I think these are the directions to the Round Farm ruins, not the Rams Tail ones. If you start on 6 and head south on Rams Tail Road, you immediately pass a cemetery on your left, where you should park. Then, just follow the yellow blazes to the mill site.