A couple years ago I posted about the Pigman of Northfield, Vermont. It was one of my more popular posts, but I didn't think I had much more to say about this porcine creature of the night.

However, while poking around on the web recently I found some more Pigman stories. I usually try to cite books or other traditional sources for this blog, but even thought the Pigman stories are just on message boards they are too good to resist. I like to think of these as good campfire stories, but the campfire is my computer. (If you're not up to speed on the Pigman, you can read my original post here.)

The newer version of the Pigman story claims that way back in 1951 the Pigman was just a normal seventeen year old boy named Sam Harris. On October 30, the night before Halloween, Sam set out with some eggs and toilet paper to cause trouble and vandalize his neighbors' houses. It was a tradition for the local teens. You see, in Sam's hometown of Northfield October 30 was called Picket Night, and it was the designated night for mischief.

Unfortunately, Sam never returned. His concerned parents called the police and hundreds of volunteers searched the woods around Northfield, but they found nothing. Sam Harris was never seen again. 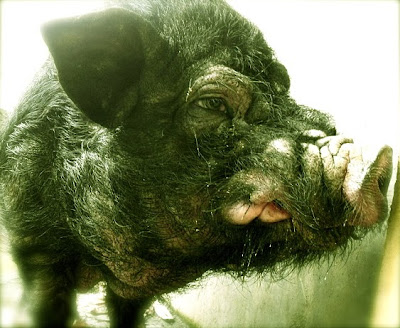 But something else was seen that gloomy autumn, something disturbing: a hideous humanoid with the head of a pig. The creature was seen lurking in the woods at night, particularly in an area called the Devil's Washbowl, where he terrorized teenagers in parked cars. The rumor began to spread that this monster was really Sam Harris, and that he had given himself to Satan. People said he ate the raw entrails of pigs, and wore the head of one over his own.

Sam's family and friends were outraged at the rumors, and a local historian wrote an article debunking them in the local newspaper. She disappeared shortly after it was published. Her body was found several years later in the Devil's Washbowl with the words "Picket Night" carved in her skull.

One morning in 1954, Sam's mother told a neighbor that Sam had come to her house the previous night. He had dragged a pile of pig entrails across the porch floor as a gift for her, and squealed with feral glee at the bloody organs before disappearing into the darkness. His eyes were like an animal's. Thirteen days later, Mrs. Harris committed suicide by throwing herself into a neighbor's pig pen, where the hungry swine devoured her.

Ever since, the Pigman has roamed through the dark woods around Northfield. The creature has been blamed for many animal deaths and several human disappearances, but has never been caught.

There's the new Pigman story. It's entirely possible this tale is just being spread by one person on message boards across the web, but there are some things about it that I find interesting.

As I've mentioned before, the nights around Halloween often have different names in different areas. I find it interesting that October 30 is called Picket Night in this story, which seems like it could refer to a real tradition in Northfield. If you know anything about Picket Night, please leave a comment - I'd love to know more!

It's also significant that the Pigman lurks around the Devil's Washbowl. Areas named after the Devil tend to accumulate legends about supernatural happenings.

Finally, there seems to be some implicit message about men and women in this story. Sam Harris begins the story as mischievous teen, and then devolves from boy prankster all the way to a hideous man-beast that lives outside of society and eats raw flesh. The female historian who tries to defend his reputation and symbolically reclaim him as human meets a horrible fate, while poor Mrs. Harris is destroyed by the realization that her son really is an animal who has resisted all her years of mothering. I don't think it's true, but the message seems to be that men are wild, and women are doomed in their attempts to civilize them. It sounds like a great topic for someone's Master's dissertation!

hmm...reads to me like a regional variant of Maryland's Goatman legend with a little of that puritan satanic panic thrown in for effect.

however, in the sense that there are actually documented sightings of something that fuel it, the VT Pigman reminds me more of the Bunnyman legends of Fairfax, VA. that particular legend comes from a series of encounters in 1970 with a young vandal dressed in rabbit ears who was seen taking an ax to a new housing development in the area.

but unlike the Bunnyman, who was clearly just a demented human being, the Pigman sightings seem decidedly more Fortean nature, more like an isolated flap akin to the Dover Demon or perhaps the Mothman, which makes me wonder if there was any UFO activity while all this was going on.

Thanks for the comment! I really like how here in America we have a plethora of animal human hybrid monsters to keep us terrified. In addition to the Mothman and Bunnyman (who is amazing), there are lizard men, dog men, and of course Sheepsquatch.

You raise a good point about UFOs. As you probably know, often a lot of strange phenomena happen at once. Northfield certainly has had its share of UFO sightings but I don't know if they coincide with Pigman sightings.

I know about Pigman. Leave it alone. Sam I knew almost 50 years ago, he is alive and suffering. Please forget this story. He is a man who knows. He will kill you!

he will eat your face like he did my husband!!! Stay away, they don't believe me. I cant believe you all know about Sam when Burt Sanders said he did not exist!!! I hate you world!!!

My father was a very practical man who was well grounded ... not one for an interest in strange sightings. There was a time, however, he told me about two encounters he had with what he described as seeing " A DOG WITH A HUMAN HEAD "... they happened in 1984 and 1985. I believe what he saw was the Pigman as they both occurred in the Northfield, Vt area, specifically West Brookfield, and Brookfield. My brother-in-law was with him when they witnessed the first encounter. My mother was present during the second. He ran inside his home to get a rifle to shoot it because he said it didn't look natural and needed to be killed ( I wouldn't have killed it ... I would have reported it to the police ) but it was gone when he came back out. It REALLY shook them up .. I even found a cryptozoology sighting form in a dresser drawer he obviously decided against mailing out.

I'm not giving my name because I know what kind of backlash there would be... I don't need it ... but every word I've written is true.