You often hear the saying "As American as apple pie," but as Thanksgiving draws near pumpkin pie looms ever larger in the national consciousness.

Pumpkins originated here in North America, but even before our continent was permanently colonized by Europeans they brought pumpkins back to the Old World and started baking pies. These European pumpkin pies were quite different from the ones we consume today. Recipes from seventeenth century England involve slicing and frying the pumpkin in a batter of eggs and sugar, and then layering the slices with apples and currants in a pastry shell. Your guests would be very confused if you served that to them this Thanksgiving.

Pumpkin pie went out of style in England, and at first it seemed it would do the same in New England. In 1650, Edward Johnson wrote happily in his book Wonder Working Providence of Sions Savior in New England that colonists were making more pies from traditional European fruits like apples and quinces instead of "their former Pumpkin Pies." For Edward Johnson pumpkin pie was a low-class, tacky dessert and it was good that it was slowly disappearing.

Luckily for us it didn't. Pumpkins grow well in New England and were a dependable food source for the English. A ballad called "New England's Annoyances" praises the humble gourd:


If flesh meat be wanting to fill up our dish,
We have carrets and pumpkins and turnips and fish...
...Instead of pottage and puddings and custards and pies,
Our pumkins and parsnips are common supplies;
We have pumkin at morning and pumkin at noon,
If it was not for pumkin we should be undoon.

The earliest known American pumpkin pie recipe is one that was written down by Anne Gibbons Gardiner of Boston in the 1700s. It was very similar to the old English recipes, and involved layering sliced pumpkin with apples. The Gardiners sympathized with the British during the Revolution and fled to England, taking their pie recipe with them. They later returned to New England and lived in Maine, but Mrs. Gardiner's recipes weren't published until the 1930s. 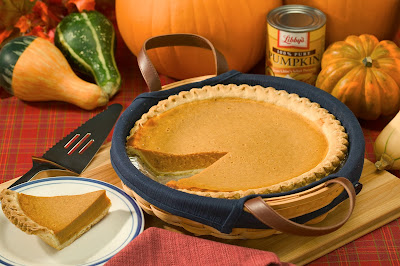 The first published pumpkin pie recipes appears in Amelia Simmons's book American Cookery, which was printed in Connecticut in 1796. Her two recipes are very similar to modern ones. The old-fashioned layered pumpkin slices have been replaced by the pumpkin custard we're familiar with today:

No. 1. One quart (pompkin) stewed and strained, 3 pints cream, 9 beaten eggs, sugar, mace, nutmeg, ginger, laid into paste No. 7 or 3, and with a dough spur, cross and chequer, and baked in dishes three quarters of an hour.


The big difference between her recipes and contemporary ones is that she tops the pie with a lattice crust. Most modern modern cooks omit a top crust. Still, I think you could follow her recipe and safely serve it to your guests this Thanksgiving for a historically authentic yet delicious dessert.

I found this information in James Baker's Thanksgving. The Biography of an American Holiday and Keith Stavely and Kathleen Fitzgerald's America's Founding Food. The Story of New England Cooking.