A Mohegan Witch Story from 1904

Here's a nice witch story from the Mohegans of Connecticut that anthropologist Frank Speck published in 1904. The English settlers weren't the only ones who believed in witches, and the local Indian groups maintained their own witch folklore well after the area was thoroughly colonized by the British.The story goes something like this.

Many years ago an old Mohegan woman set out to walk all the way to New London to sell some brooms she had made. Making brooms was a common way for Indian women to make money at the time, and there was a bigger market for them in the city that out in the country.

However before the woman reached New London the sun began to set, and soon it was very dark. She grew concerned and wondered where she was going to spend the night.

Luckily she came upon a house with light shining from the windows and smoke coming from the chimney. It looked very inviting, so she knocked on the door.

A white woman answered the door, and invited the elderly Mohegan lady to come in. The Mohegan woman said, "Thank you! I am walking all the way to New London and need a place to stay. Could I please stay here tonight?"

The white woman smiled and said, "Of course. You will be my guest tonight. But you must tell no one that you saw me here."

The Mohegan woman thought this was an odd request, but agreed to it anyway. The white woman then brought out some bread and cheese and offered it to the elderly woman.

The Mohegan woman accepted the food, but said, "Thank you, but I'm not hungry right now. I will eat this tomorrow before I finish my journey." She then lay down near the fire and went to sleep. 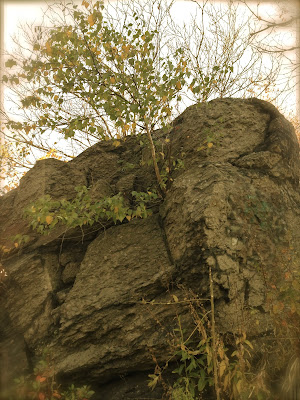 When she awoke in the morning, she was amazed to find herself lying outside in the woods. Nearby her was a giant boulder which was the same size as the house she had seen the night before. When she reached in her pocket for the bread and cheese she was horrified to find they had been turned into a hard piece of cow dung and old white bone.

I like this story quite a bit. Apparently the "house turning into a rock" theme appears in stories from other Algonquin tribes, and the white woman whose hospitality is a lie certainly makes sense as a comment on the Mohegan's political situation. I can also see connections to European fairy lore, where the gifts given by the fairies often turn out to be worthless in the daylight and the fairies swear those who see them to secrecy. I don't know if those similarities are the result of recent historical enculturation or come from a much older historical or psychological strata.

Frank Speck himself is an interesting character. He was born in Brooklyn, but was as a sickly child and was sent to live with a family friend in the healthier, more rural environment of Connecticut. The family friend was a Mohegan woman named Fidelia Fielding, and under her tutelage young Frank developed an enthusiasm for Indian culture, eventually becoming one of the preeminent anthropologists who studied the Indian cultures of the Northeast.

If you like this story, I'd suggest reading William Simmons's Spirit of the New England Tribes, which is full of them. A truly great book!

Hi, I was wondering where you got this story from. A book? Somewhere else online? Thanks!

Hi Ella! Sorry, I guess I wasn't clear in the post. I found the story in the book Spirit of the New England Tribes by William S. Simmons. It is full of Algonquin legends from the southern New England states, dating from the 1600s to the 20th century. Really a great book, and full of references for further reading.

Oh of course! Thanks!

Thanks Tom! I'm glad you like the story. It's short, sweet, and a little bit creepy.

Get daily suggestions and guides for earning THOUSANDS OF DOLLARS per day FROM HOME totally FREE.
GET FREE ACCESS NOW