Boston's North End is one of the oldest parts of the city. Although most of the buildings are now multi-story brick buildings, up until the early 20th century the neighborhood was made up primarily of wooden Colonial-era buildings.

Here's a description of traveling through the old North End at night from H. P. Lovecraft's story "Pickman's Model":

When we did turn, it was to climb through the deserted length of the oldest and dirtiest alley I ever saw in my life, with crumbling-looking gables, broken small-paned windows, and archaic chimneys that stood out half-disintegrated against the moonlit sky. I don't believe there were three houses in sight that hadn't been standing in Cotton Mather's time - certainly I glimpsed at least two with an overhang, and once I thought I saw a peaked roof-line of the almost forgotten pre-gambrel type, though antiquarians tell us there are none left in Boston.


Lovecraft was an antiquarian himself, and wrote that paragraph after a visit to to the North End in 1925 or 1926. Unfortunately for him (and for anyone who loves architecture and history), the area was considered a slum. Most of the wooden houses were demolished shortly after his visit to build the more modern brick buildings that are seen there today.

Some of the original old buildings still remain, including the Paul Revere house and the Old North Church. A few other old houses are hidden here and there, including Boston's skinniest house.

The Skinny House is located across from the entrance to Copp's Hill Burying Ground. The four story, 18th-century home is Boston's narrowest dwelling, being only 10 feet wide at the end facing the street, and narrowing to a mere three feet at the other end. I'm getting a little claustrophobic just thinking about it! On the fourth floor, the ceilings are only six feet four inches high. You need to be both skinny and short to live in this building. 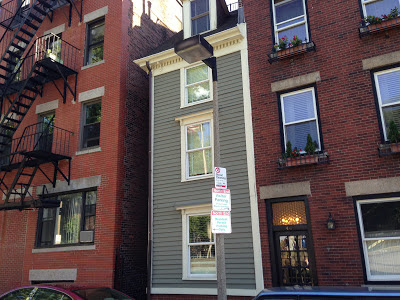 According to legend, the house was built by a man named Joseph Eustus. Joseph was left the tiny strip of land when his father died, while his brother was left a much larger adjacent plot. The brother built a spacious house on his plot, which had a prized view of the harbor, and assumed that Joseph would just abandon his miniscule inheritance. After all, it wasn't it too small to build a house on? 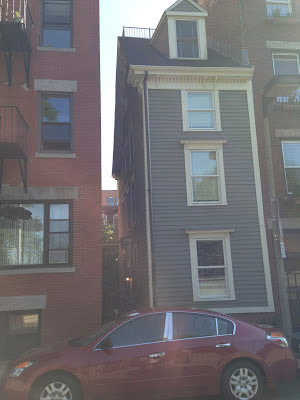 Not if you were angry about being short-changed in your father's will. Spitefully, Joseph built a very tall narrow house immediately next to his brother's new home. It was tall enough to block his view of the harbor. His brother's large house has long since disappeared, but Joseph Eustus's skinny house remains to this day.

The Skinny House is a private residence, so be respectful if you walk by. I found my information about the legend in Joseph Citro and Diane Fould's Curious New England. The Unconventional Traveler's Guide to Eccentric Destinations.

Fascinating. I'm rereading Pickman's Model and was curious about his descriptions of the North End. That led me here.