When I visited the Skinny House last week I also stopped by Copp's Hill Burying Ground. It's right across the street, so why not? I love visiting a historic cemetery.

Copp's Hill was first used as a cemetery starting in 1659, and ending in the 1850s. It's estimated that more than 10,000 people were buried here. It's not a very large cemetery, so I guess they were either buried on top of each other or many bones were exhumed and moved elsewhere.

Some very notable people are buried at Copp's Hill, including several members of the Mather family (famous for their role in the witchcraft trials) and Prince Hall, a famous African-American Freemason.

Lots of less notable people are there as well, including Captain Daniel Malcolm. Although not well-known today, he does have an interesting gravestone. 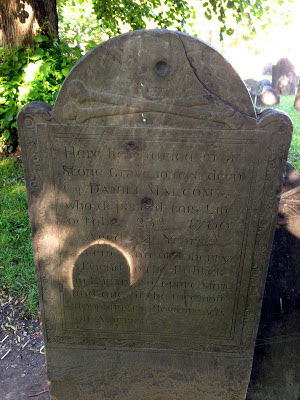 Note the strange round marks on the marker (including one in the skull's eye). Are they just flaws in the stone? Are they caused by natural erosion? The latter seems unlikely, because other stones at Copp's Hill show signs of wear and tear, but look nothing like this.

Well, according to legend those round marks are actually bullet holes. 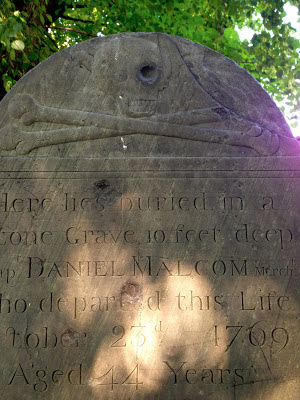 Daniel Malcolm was a local patriot, and took great joy in smuggling wine and tea into Boston without paying taxes to the British. He once allegedly brought sixty casks of wine into Boston undetected - and untaxed. As the inscription on his grave reads,

The British had great hatred for Captain Malcolm, but unfortunately he evaded punishment while he was alive. Before he died, he asked to be buried in a stone grave ten feet deep so the British soldiers would not be able to harm his body.

Frustrated that he had escaped them even in death, they used Daniel Malcolm's gravestone for target practice, which is what those round marks are from.

I don't know if this story is 100% true. I suppose we'd need a ballistics specialist using an 18th century British firearm to figure out if those marks are even what a musket ball would make. But it's a good story nonetheless.

I think the story is true... because:

There are no similar defects in other stones, and slate would not simply decay to leave pock-holes.

The size of the hole is consistent with a musket ball of the time. (Huge compared to today.)

Malcolm's brother, a tax collector and loyalist was tarred and feathered by the Son's of Liberty, thus building ill will toward his patriot brother!