I've been blogging about "ye olde tyme foklore" for the past month, so I am shaking things up this week by posting about something a little more current (if you consider 1977 current). However, there's still a surprising "olde tyme" angle so neither you or I will go into complete withdrawal.

And besides, now that it's October, it's time for something even weirder and more uncanny than usual.

On the night of April 21, 1977, seventeen year old Bill Bartlett was driving two of his friends down Farm Road in their hometown of Dover. Dover, located about 15 miles from Boston, is one of the nicest suburbs in Massachusetts, with lots of woods, open fields, and old stone walls.

As he drove past one of those stone walls, so characteristic of charming New England towns, Bill saw something unusual in his headlights. At first his mind didn't quite register what it saw, but when it did he turned the car around and drove back to the wall. 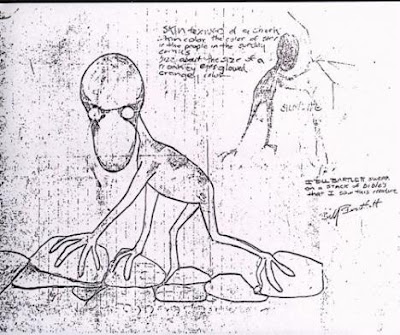 That drawing is the actual one Bill made that night. He claimed he saw a creature about the size of a baby, with long spindly limbs and fingers that wrapped round the rocks. Its eyes glowed bright orange in the car headlights. On the right hand side of the drawing Bill wrote "I, Bill Bartlett, swear on a stack of Bibles that I saw this creature." Bartlett, now a professional artist living in Needham, still believes he saw something strange that night, but he has never made another drawing or painting of the creature since.

The passengers in Bill's car didn't see the creature, but three other teenagers did. John Baxter, age 15, was walking home from his girlfriend's house around 12:30 am, about two hours after Bill Bartlett's encounter. As John neared the intersection of Miller Hill Road and Farm Road he saw a figure walking towards him. Thinking it was a friend, he called out, but the person didn't respond. John and the figure walked closer towards each other, and when John was about 25 feet away he realized there was something strange about the other person. The proportions didn't seem quite right. Was it even a person at all? Abruptly, the figure ran into the woods.

John ran after it. Was it a monkey? A small child? It stopped, perched on a rock near and staring at John. Its eyes glowed orange as it waited for John to draw closer. He didn't, but instead ran back to Farm Road. When he reached home he made this drawing of what he had seen: 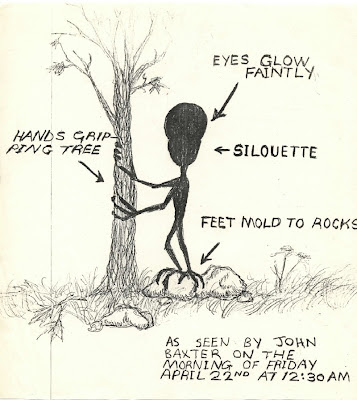 The Dover Demon made one last appearance. The next night, eighteen year old Will Taintor and fifteen year old Abby Brabham were driving down Springdale Ave. in Dover when they saw something by the side of the road near a bridge. At first they thought they were looking at an ape, but something didn't seem right. Abby later said, "It had bright green eyes, and the eyes just glowed like they were just looking exactly at me."

Word soon spread around town, and articles appeared in the South Middlesex Sunday News, the Boston Globe, and the Boston Herald. Cryptozoologist Loren Coleman traveled to Dover to investigate, and christened the creature the Dover Demon. The name stuck. Thanks in part to its catchy name, the Dover Demon has become one of the most popular cryptozoological creatures in the world. It was even immortalized as an action figure.


What was the Dover Demon? It might have been a UFOnaut, but no strange lights or saucers had been seen near Dover at the time. Someone thought it was a baby moose, but April isn't the right season for moose calves, and moose were quite rare in Massachusetts in 1977. Could it be an escaped monkey of some kind? But what type of monkey is hairless and has no mouth, nose or tail? An elaborate hoax devised by bored teenagers? Maybe, but many adults vouched for the witnesses' honesty. Given its enduring popularity, if the Demon was a hoax it obviously tapped something resonant for many people.

Maybe if the Dover Demon showed up again we could figure out what it was, but it never appeared again after that night - or at least not so obviously. One night in 1978 John Bartlett was in a parked car with his girlfriend when they heard something thump the side of their vehicle. They saw a small figure running into the woods, but couldn't see who (or what) it was. Was it the Demon? Possibly, or just a local kid pulling a prank. If it was the Demon, that was the last time it has been seen.

The Demon may have appeared before 1977, though. In a 2006 Boston Globe article, Mark Sennott of Sherborn told a reporter that he and some friends had seen something similar at Channing Pond near Springdale Avenue in 1972. The police investigated at the time but nothing came of it.

Farm Road has a history of unusual activity, as noted in Frank Smith's 1914 book Dover Farms: In Which Is Traced the Development of the Territory from the First Settlement in 1640 to 1900. Smith writes that "in the early times", a large rock on Farm Street was named after a man who had seen "his Satanic Majesty as he was riding on horseback in this secluded spot." The area was also rumored to be the site of buried treasure, and in the folklore of the time treasure was often guarded by a supernatural entity, like a ghost or demonic animal.

Satan. Buried treasure. Teenagers in cars. A weird alien creature crawling on a wall. There's no easy summary to this story. Maybe when those forces from the other side erupt through on a dark night, we see them in the shapes our culture determines for us, like a fallen angel galloping by on a black horse, or a spindly-limbed monster crawling over a stone wall. Are those forces extra-dimensional entities, demonic beings, or archetypal forces hiding in our own minds? I don't know, but I suspect if you go poking around in the woods after dark you might find out.


***
My main sources for this post were the previously mentioned Boston Globe article, this article by Christ Pittman, and Joseph Citro's Weird New England.

Hmmm....makes one wonder. Really enjoyed reading about the Dover Demon. I'd never heard of it before this post. Thanks, Peter!

Thanks for reading Annie!