Turkey has long been the focus of Thanksgiving feasts in New England. In the colonial era, both domestic turkeys and their wild cousins wound up on the Thanksgiving table.

Unfortunately for them, wild turkeys aren't the smartest birds. The famous naturalist James Audubon relates how he once killed three turkeys with one shotgun blast. Rather than fly away to save their lives, the other members of the flock strutted around their dead friends. Clearly they aren't too bright.


Given their small brains and our ancestors' propensity to shoot anything that moved, the wild turkey became nearly extinct in New England by the middle of the 19th century. One author claimed at the time that the last wild turkey in Massachusetts was killed on Mount Tom in 1847. Its taxidermied corpse was displayed at the Yale museum. 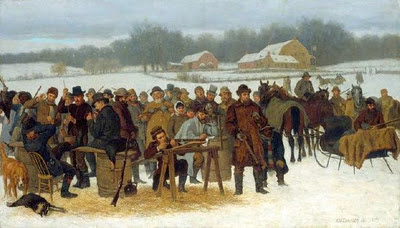 A turkey shoot, by John Whetten Ehninger.
There were still abundant domestic turkeys available in the 19th century, but some men in New England preferred shooting their Thanksgiving dinner. This led to a somewhat barbaric practice: the turkey shoot.

A farmer would tie one of his turkeys to a fence post or a tree, and then gather together a group of men. Each man was charged a fee, and whoever shot the turkey was allowed to take it home for dinner. It was not as easy as it sounds, since guns at that time were not particularly accurate, and the distance between shooters and turkey was around 300 feet. As James Baker writes in his book Thanksgiving: the Biography of an American Holiday,

"As in shooting galleries at modern carnivals, it took luck and skill to hit one's target, considering the distance, the movement of the bird, the firearms of the day, and the amount of alcohol consumed."

Happily, times have changed. Wild turkeys have made a comeback in New England and most turkey shoots now feature paper targets. For a Thanksgiving totally free of cruelty, I would suggest tofurkey. It may not taste exactly like turkey but it will be easier to shoot if you tie it to a tree.