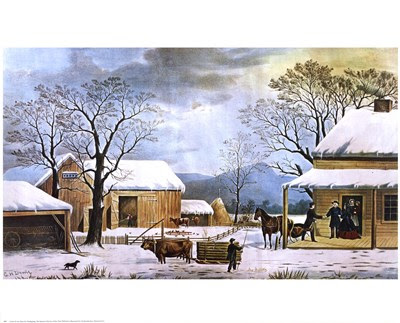 The image above is a vintage Currier and Ives print from the 1860s. It shows a quintessential New England scene: a snowy day, an old farm house, a horse drawn sleigh. It evokes a wonderful feeling of Christmas, doesn't it?

Then why is this print titled "Home for Thanksgiving?"

A similar question is raised by Lydia Marie Child's "Over the River and Through the Woods", which has the following lyrics:

Over the river, and through the wood,
To Grandfather's house we go;
The horse knows the way to carry the sleigh
through the white and drifted snow.

The song was originally published as a poem with the title "A Boy's Thanksgiving Day". Why are people riding a sleigh on Thanksgiving? Some parts of New England might have snow for the holiday, but November usually isn't really a big snow month around here.

Even factoring in global climate change, our Novembers are probably not that much different from Novembers in the 19th century. According to James W. Baker's Thanksgiving: the Biography of an American Holiday, something else explains all this snowy Thanksgiving imagery.

Before Thanksgiving became a national holiday permanently celebrated on the fourth Thursday of the November, its date was determined by local town, city, and state governments. The date varied quite a git. Some years it was celebrated in late November, but in other years it could be celebrated as late as December 22nd. Christmas was not celebrated in New England until late in the 19th century, so there was no conflict in having Thanksgiving so late in the year.

In fact, as reader Wicked Yankee presciently mentioned in a recent comment, Thanksgiving effectively took the place of Christmas in Puritan New England. And just as we associate snow with Christmas, the Puritans associated it with Thanksgiving. If Bing Crosby had been a Puritan, he would have sung "I'm dreaming of a white Thanksgiving." The Currier and Ives print and Lydia Marie Child's poem reflect this earlier ideal of the snowy white Thanksgiving.

Mystery solved. I hope you all have a safe and happy Thanksgiving, with or without snow!

Email ThisBlogThis!Share to TwitterShare to FacebookShare to Pinterest
Labels: A Boy's Thanksgiving, Currier and Ives, James W. Baker, Over the River and Through the Woods, snow, Thanksgiving

I never thought of that. Thanks Peter!

Doug, I aim to edify!