The Spirits of Anawan Rock

Someone should write a book called Notable Rocks of New England, because there are just so many of them. For example there's Dungeon Rock, Dighton Rock, and of course Anawan Rock in Rehoboth Mass., where Tony I stopped last weekend on our way to Providence. 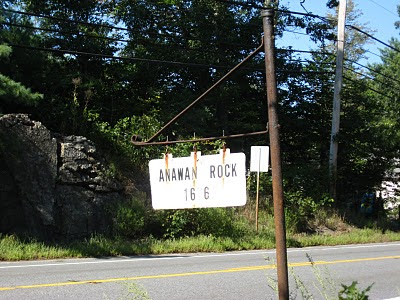 An inconspicuous sign on Route 44.
We knew the rock was somewhere on Route 44, but we couldn't quite find it, so we stopped to ask directions. We were hoping to find a grizzled old-timer in a rocking chair who would say "Anawan Rock? Why you be wantin' to go there? Stay away if you know what's good for you..."

Instead, we stopped at a really nice farm, and asked a very pleasant woman if she knew where the rock was. Our hopes for Scooby Doo style mystery rose briefly when she said "Anawan Rock? No one's asked for directions there since that guy on the bike last year..." But they were dashed when her co-worker chimed in, "No, he was looking for some other rock. Anawan Rock's down the street near Uncle Ed's ice cream store!" We followed their directions past the ice cream store (which was not spooky), until we saw the sign for the rock. 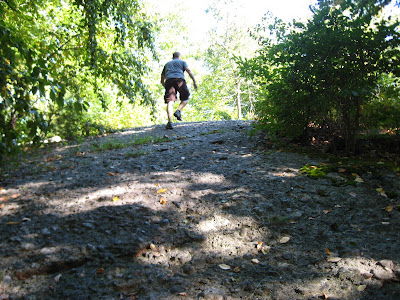 Tony clambers up the rock.
Nothing weird or eerie happened on our trip to Anawan Rock, but the rock has a history that is tragic, and there's also a creepy legend attached to it. Why else would we want to visit it?

The tragedy occurred in August of 1676, when the Algonquin sachem Anawan and his men took refuge at the rock as King Philips' War was winding down. Metacom, aka King Philip, had been killed by the English in early August and the tide had clearly turned in favor of the colonists. As one of Metacom's supporters, Anawan knew he was next on the colonists' hit list. 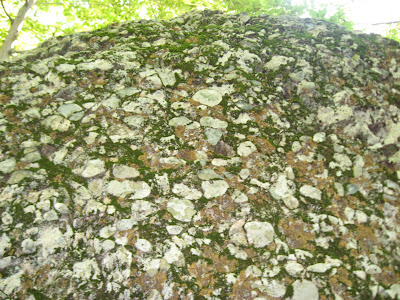 Despite the drought, the rock was still covered with lush moss.
It's not clear why he chose this particularly rock for a last stand, but it could be because it's located near a swamp. The Algonquins often retreated to swampy areas in times of trouble, both for practical defensive reasons and because spirit allies like Hobbomok were more accessible in such places. Whatever the reason he went there, things didn't work out well for Anwan. He was tracked down by Captain Benjamin Church of Plymouth Colony, and surrendered on August 28 after Church promised he would not be executed.

Unfortunately for Anawan, the Pilgrims didn't keep their word. He was beheaded, and his head displayed on a pole at Plymouth for several years. 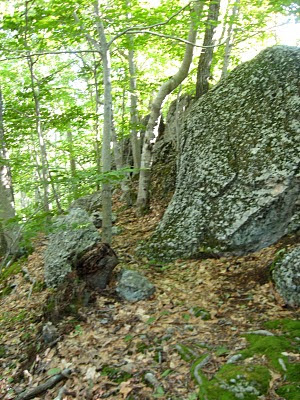 Another side of Anawan Rock.
With such a tragic history, it's not surprising Anawan Rock is now considered to be haunted. Phantom camp fires have been seen, and voices are sometimes heard in the woods crying out "Iootash!", which means "fight on" in the local Algonquin dialect. Strange screams and shouts can also be heard in the rock's vicinity. And these aren't old ghost stories from the 1700 or 1800s - paranormal researchers claim these phenomena are still happening today. 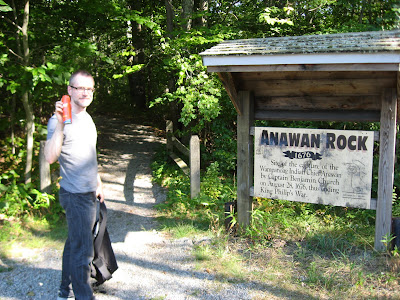 We didn't see any ghosts, and happily the bug spray kept away mosquitoes and ticks as well.
Tony and I didn't have any weird experiences, but we did have a strange coincidence. We were there on August 28, 2010, 334 years to the day when Anawan surrendered.

I got my information from Thomas D'Agostino's Haunted Massachusetts and Cheri Revai's book, which has the same name. You can also find plenty of information on the Web.

Chief Anawan was a Wampanoag, not an Algonquin.

Went their today. Walked in happy. Came out running. Took some creepy pictures.

Thanks for the comments!

Timaloha, Algonquin is a blanket term covering many of the different tribes that lived in the Northeast. They all spoke similar languages and had similar cultures. I confess that its lazy of me to use the term Algonquin rather than to name the specific tribal group!

Anonymous, I'd love to see your photos. Feel free to email me if you get the chance!

There was an algonquin tribe... when were all once one, now it is a term used to describe eastern woodland people.@ Anonymous ... he was Wampanoag... pokanoket is one of many branches of Wampanoag....aquinnah, mashpee,herring pond, seaconke,pokanoket, Pawtucket, pawtuxet... all wampanoags... the Pawtucket and pawtuxet are extinct.

please note there is also local accounts of partial native american apperitions in the woods of that area and several accounts of flooting masses of mist on nites that are not foggy. these are all accounts from local sources. al/ Mojo

The noise that people hear and claim to be the war cries of Natives are simply the calls of great horned owls when nest in the trees above the rock. It is a wonderfull historic place, one of my favorites in the area, but by allowing supersition to take over people often overlook the rich history we should respect. There is nothing supernatural or paranormal at Anawan Rock.

Thanks for the comment. Hmmmm... I don't necessarily think supernatural stories make people overlook our region's history. In fact, I think ghost stories can help keep history alive in people's memories. Maybe visiting sites like Anawan Rock is a way for them to participate in the events that happened in the past, much like visiting a museum.

As a teenager, many years ago, I witnessed something at Anawan rock that still makes my skin crawl. There were about 7 of us standing on the trail before the rock. Flickers of light on the face of the rock appeared and disappeared before our eyes. We ran to the parking lot to regroup. After some discussion we went back and witnessed the lights once again. Then from atop of the conglomerate formation the sky lit up as if there was a campfire illuminating the trees. We got the heck out of there. Say what you will about swamp gas escaping and igniting but to this day I am not sure what was witnessed. I'm sure the people in the group calling out Iotash was not any help.