A couple weeks ago we took a trip to Rainsford Island in Boston Harbor. Even though it's part of the Harbor Islands park system, it's not included on the official ferry route. It's a place most people don't see, so we were lucky to get there on an excursion sponsored by the Friends of the Boston Harbor Islands. 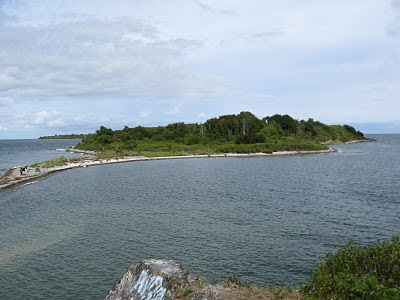 The eastern half of Rainsford Island.
There is a brief legend associated with Rainsford Island. According to Edward Rowe Snow, a prominent local maritime historian, a skeleton carrying an iron sword was unearthed on the island in the 1820s. Snow thought the skeleton belonged to a Viking named Torvald.

That's really not much of a legend, and it probably came from the same Norseman fever that gave rise to wild stories about the Newport Tower. The island's real history is actually a lot more interesting than the legend. 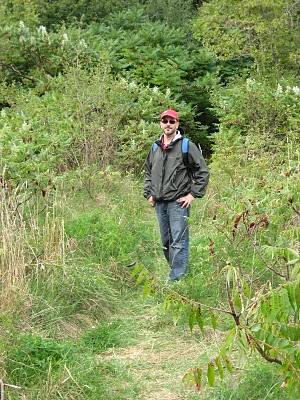 Tony ready to explore!
The island was first used by local Indians for fishing, and was later deeded in 1632 to one Edward Rainsford, who used it as a farm.

I guess farming on a small rocky island didn't work out, and in the 1700s Rainsford Island was used to quarantine sick sailors arriving from other ports. The authorities didn't want them carrying disease into Boston, so they were put in a hospital on the island until they either recovered or died. 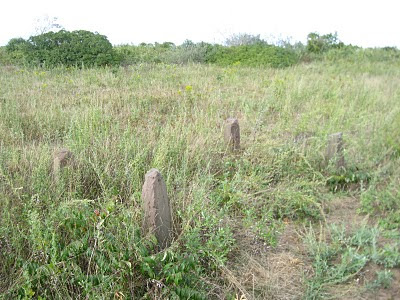 And apparently a lot of them died. The island has a large graveyard that may contain thousands of bodies. If there were any headstones they're long gone except for these four stone posts, which probably supported a chain around an important person's monument. We don't know who that important person was.

Rainsford was also used to quarantine Boston citizens who were ill with diseases like yellow fever. Citizens and sailors alike were housed in a large hospital nicknamed the Greek Temple because of its large columns. 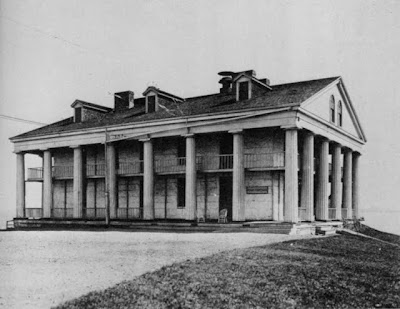 The Greek Temple (from this site).

Today, nothing remains of the hospital except a few foundation stones and possibly a stairwell. 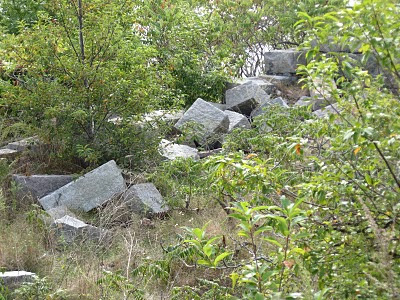 However, the rocks near the shore below the hospital site are carved with several centuries of graffiti. The oldest seems to be from 1647! It was amazing to see the names and dates of people who were quarantined or worked here over the years. 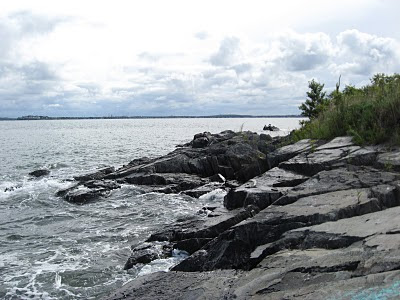 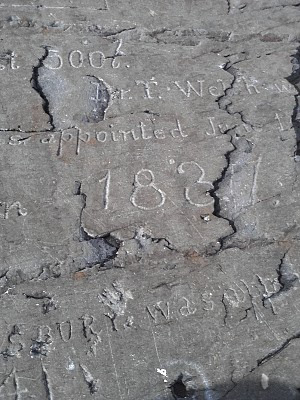 Historic graffiti on the rocks.
After the quarantine hospital was shut down, the island was used as a reform school and a poorhouse. Today, there's nothing on the island except a few foundations, an old well and graffiti. 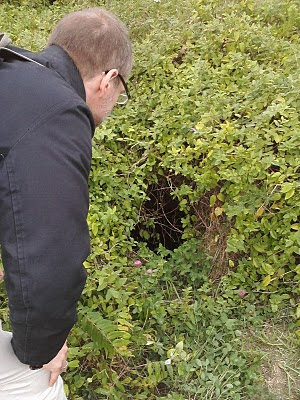 The well on the eastern part of the island. Anybody down there?

It was definitely a great trip, even if we didn't see any Vikings.

That was very interesting - great job on the narrative and the pics. It's nice to learn something new about your state.

Was there today what a treasure.

My grandfather, James Francis Costello, was the caretaker on Rainsford Island from shortly after the Boston Police strike to about the late 20's.
Mother [born 1909] said that in the Summers, children from the city came out for day trips. She worked as a lifeguard when she was a teen-ager.
They lived in 3-4 rooms of a large house. They could only afford to heat this part of the home since they depended on the city to get them wood to heat.
there was a headstone that read "under these grey rocks
in a box lies Hattie Cox
who died of smallpox"
Elizabeth pesci

Thanks for your comment Elizabeth! It's very cool that your grandfather and mother actually lived there. We didn't see any headstones - I think they've all been destroyed or are hidden in the weeds.

Hi Andy! Thanks for the update!

My great grandfather John Curry died on the Island in 1883. His body was returned to his wife Jane Carroll and his daughter Mary Jane Curry and buried in Brookline. We don't know why he was there. I believe at the time of his death, it was a school for boys.

My 3rd gr. grandfather is also buried here -- I'm trying to find out why? He died in 1875. I'm doing some family research so am really anxious to find out why he was there - he was from Nova Scotia -- Geddes Samuel Bligh. If anyone has information on how I can further research this - please send me an e-mail - petmolly@yahoo.com. I fortunately live in New England so at some point will take a tour. Thanks in advance.

My 2x great grandfather, John Eagan, also died on Rainsford in 1863, of heart-related issues having to do with his service in the Civil War.

I have been researching the history of Rainsford Island for several years. Although there were discussions, beginning in the 1920s, I cannot confirm that any bodies were removed to Long Island.

The Boston Globe, May 30, 1937, page B5, notes that the Sons of the War of 1812, decorated a tablet that was recently placed on the grave of Lieutenant Horace Stockton White.

The Boston Globe, June 27, 1943, page B 41, notes that the Sons Of Union Veterans of the Civil War will have an outing at Rainsford on July 4th and decorate Veterans’ graves.

The Boston Globe, November 12, 1946, page 1, notes “Boston Assailed for Neglect of Veterans’ Graves”.. “The graves of 200 Civil War Veterans and 50 Spanish American War soldiers have been neglected and desecrated..” .. “almost all the gravestones have been pulled around and knocked apart like rock…….you can’t even tell where the graves were!” My note--- the last burial at Rainsford occurred before the beginning of the Spanish American War.

Finally, the Boston Globe, April 18, 1947, page 13 notes that “The remains of 350 persons, including 79 Civil War Veterans, will be moved from Rainsford Island to Long Island...”

I find no evidence that anyone was removed to Long Island. Even if 350 bodies were removed in 1947, that would leave at least 1,300 behind. The bronze memorial to the 79 Civil War Veterans that are buried at Long Island, having been transferred from Rainsford, does not include many of the names of Veterans that I know were buried at Rainsford Island.

I just wanted to add that there's a wonderful painting of Rainsford Island in the MFA collection, done in about 1840 by Robert Salmon.
http://www.mfa.org/collections/object/rainsfords-island-boston-harbor-33220

Wow! I have learned a lot. I have reason to believe that my 5th Great(and maybe his wife) may have caught Smallpox during abt 1775-1778 . I can find records of all the other Sargent's in my family that died. But absolutely nothing on Samuel Sargent who was the son Of Thomas Sergeant(Sargent) and Elizabeth (Tompson) Sargent. Samuel m Bethany Sargent(not a name you would miss in records) They had three children, Elizabeth Sarah aka Sally, Samuel b. 1765 and my 4th Great Thomas Sargent. Sally died abt 23 and never married in Boston. But family word is she lived with a rich Uncle. . I did find her death. Samuel and Thomas moved to NY by 1800. Nothing absolutely more about Samuel except that he supposedly drown on Long Island in Boston Harbor? Then one day I was looking @ town minutes of Boston abt the Revolutionary times and I read a Samuel Sargent and an his wife were taken to the Sugar house(?) Hospital in the bay somewhere? Was this hospital called Sugar house or something like that? I just read that over 800 died of Small pix before they inoculated people. But they were NOT allowed to toll a bell if people died from the disease. Weird. So I believe that may be why I am not finding a thing about Samuel and Bethany(Smallidge) Sargent. She was alive about 1778. But no record of where she died after that? There are about 10 Samuel Sargents(spelled several ways in the Boston area who in the Revolutionary war. Where did they go? Thanks!! Penny

Thank you for sharing your photos and info about Rainsford. A second cousin of mine, Joseph Cadigan, died there on August 19, 1921. He was one of many children on an "excursion" to the island. Lifeguards Joe Canty and Billy Long were involved in the attempted rescue and recovery of the body.