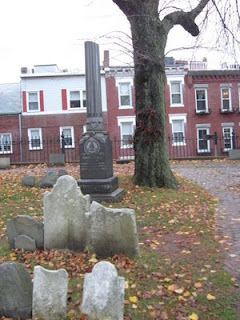 One African American with a well marked grave is Prince Hall (1738 - 1807, but his grave marker says 1748 - 1807). As you can learn on the Web, or if you visit Copp's Hill, Prince Hall was a prominent black citizen of Boston, and probably fought in the Battle of Bunker Hill. He also was an abolitionist, civil rights activist, and educator. 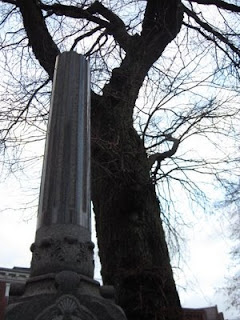 However, he's most famous for being one of the first black Freemasons in America, and was named Grand Master of the African Grand Lodge of North America (later renamed the Prince Hall Lodge). In 1895, the Masons erected an enormous monument to recognize his contributions. Prince Hall lodges still exist around the world.

How is this folklore? Well, there's a lot of mysterious lore about the Masons - secret conspiracies, the eye in the pyramid on the dollar bill, etc. I think it's pretty exciting that we have an important one buried right here in Boston.

Great bit of history Peter, thanks for sharing!