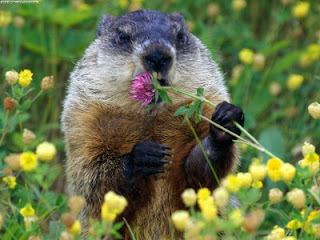 One thing I love about Algonquin mythology is how the natural world and the human world interact in one big social system. A woman marries a bear and gives birth to his son, who turns out to be human. Two weasel sisters (who live as if they were human) accidentally marry two stars. A powerful wizard, who is a partridge, battles the evil porcupine sorcerers who killed his water-spirit wife. Underlying these myths is the assumption that all creatures are basically the same, and therefore deserving of our respect.

One of my favorite beings in these stories is Grandmother Woodchuck. She's the grandmother of Glooskap, a culture hero among the Wabanaki tribes. Glooskap reminds me a little bit of Hercules, since he's always fighting monsters and making the world safe for humans. There's a little bit of Merlin in him as well, because he's a powerful magician. But really he's a unique being in his own right. Unlike Hercules or Merlin, he's a trickster, purely good-hearted, and more than a little naive. Despite all his powers, he often makes dumb mistakes.

Grandmother Woodchuck is always there to help him fix those mistakes. In one story, Glooskap ties up the giant eagle who creates the world's winds, and doesn't untie him until his grandmother points out that the world will become hot, stagnant and uninhabitable without wind. In another, Glooskap captures all the world's animals in a magic bag woven from woodchuck hair. He only lets them go when Grandmother Woodchuck points out that everyone else will starve to death with no game to hunt.

As we approach Groundhog Day, it's nice to know that other cultures recognize the wisdom of this magical creature, because woodchuck is just another name for a groundhog. The word comes from the Algonquin word "wojak."

Very insteresting! I am doing a project on this, and this helped me so much! Thank you! :3

There are so many great Native American legends, I love reading about them.