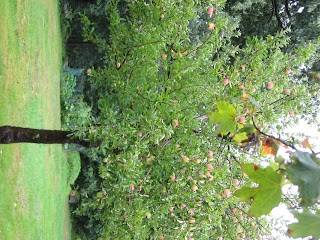 Apparently other fall produce likes to feast on flesh. The Boston Globe ran an article about a farmer in Sharon, Massachusetts who is on track to grow the world's biggest pumpkin. It already weighs 1,878 pounds and is still growing. What does this pumpkin eat to get so big? The farmer feeds it "ground bone, blood, fish, molasses, and cow and chicken manure." Yikes! The molasses is a nice Yankee touch, but the ground bone and blood are kind of creepy. It's probably better not to ask what type of blood...

Flesh-eating plants?! Great, another thing to worry about, lol!