A Lizard Man in Norton, Massachusetts

It happened on a warm night in the summer of 2001. A young man was working late at a store in his hometown of Norton, Massachusetts. At 11:30 pm he locked up and started to walk home.

He lived just a mile away, so even though it was quite dark he took a shortcut through the woods. It was a route he had taken many times before without incident. But tonight would be different.

The path through the woods was dimly lit by distant streetlights. Partway down the path the man yawned, and was terrified to hear something roaring as if in response. It sounded like a large animal. He froze. In the dim light he saw someone, or rather something, emerge from behind a tree. The creature was nearly 8 feet tall and reptilian in nature, resembling a lizard with a man's face. It was powerfully built and looked like it could "have ripped the witness limb from limb if it wanted to."

This is all pretty weird, but here's where it gets weirder. As the young man stood there, terrified, he suddenly saw a flash of bright light in the sky. When he looked back at the tree the lizard creature was gone. Stranger still, the young man's watch said it was 1:45 a.m. More than an hour had passed and he didn't know what had occurred in that missing time.

That's the end of the story. It appears in Albert Rosales's book Humanoid Encounters: 2000 - 2009, and Rosales found the story online on a site called "Your True Tales." There are lots of interesting things about this story.

First of all, it's about a lizard man, which is pretty amazing. Lizard men do pop up in North American folklore and cryptozoology now and then; the most famous is the Lizard Man of Bishopville, North Carolina who was seen in that town for several years beginning in 1986. There aren't many stories from New England about lizard men, though. This one's kind of an anomaly. 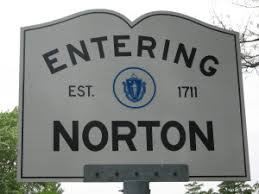 The Lizard Man of Bishopville appeared in swampy areas. So did this one. Norton, Massachusetts has lots of swamps within its boundaries, including parts of the infamous 16,000 acre Hockomock Swamp. The Hockomock Swamp is the center of an area called the Bridgewater Triangle, which is famous for its paranormal activity. Norton sits squarely inside that triangle, so perhaps its not totally surprising a reptilian humanoid would appear in a giant swamp also known for its ghosts, UFO sightings, and Sasquatch encounters.

So are there lizard monsters hibernating in the muddy swamps of Norton? Maybe, but maybe not. The strange flash of light and the missing time at the end of the story seem to indicate the creature is not really of this world. After all, strange lights and missing time are often associated with UFOs, not animals that live in the woods. If the Norton lizard man was just a physical creature he would have trudged off, not disappeared in a flash of light.

Personally, I'd call the police or at least Animal Control if I encountered a large lizard creature. This person didn't, which is perhaps why this story is not that well known. Also, lots of weird things are said to happen in the Bridgewater Triangle. Giant snakes, phantom panthers, strange lights, Bigfoot, pukwudgies. If it's paranormal it's probably happened there. In another place or another time a lizard man would probably stand out. In the Bridgewater Triangle he's just another guest at the party.