We were down on the Cape last week, and one day we decided to visit Pine Grove Cemetery in Truro. I had read about Pine Grove in the past but never visited since it is off the beaten track. With so many things shut down this year we had ample time to explore this old cemetery. 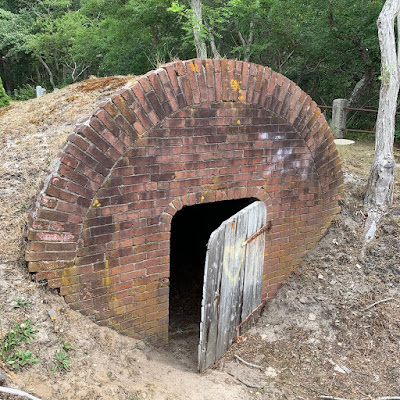 There are two aspects to Pine Grove: the charming historic side, and the creepy uncomfortable side. Let's talk about the charming historic side first. Pine Grove was established in 1794 by Truro's Methodist church. Although the church is no longer there, the cemetery remains and is still in active use. Like much of Cape Cod, Truro's open spaces have been reclaimed by the forest. The cemetery was once in an open field behind a church but is now hidden in the woods down a half-mile dirt road.

There are no houses on the dirt road, and Pine Grove is totally surrounded by the Cape Cod National Seashore. This means the cemetery is isolated and very quiet. When we went we were the only people there for well over an hour.

The oldest grave at Pine Grove is that of James Paine, who was buried in 1799, while the newest burial seems to be from this year. There are over 800 monuments in Pine Grove in a variety of styles. We saw one old-fashioned death's head, several winged cherubs, and many willow-and-urn motifs. Lots of notable Cape Cod families are buried here. 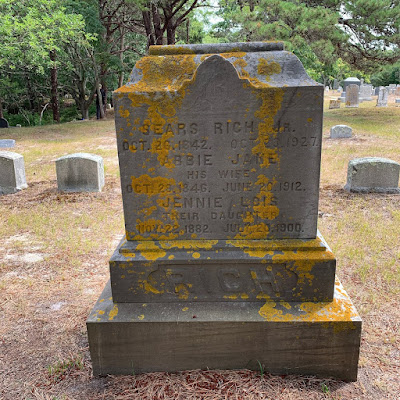 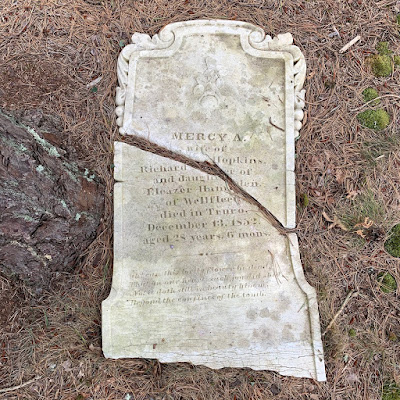 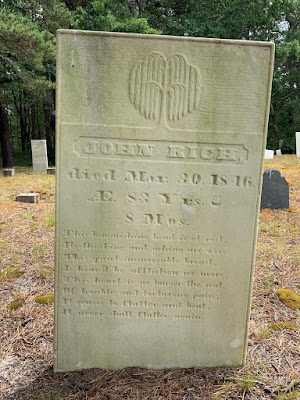 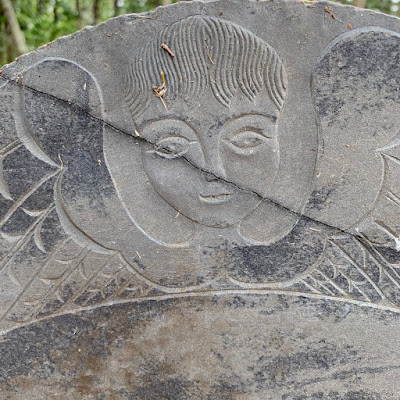 So that's the charming part: an old cemetery full of historic gravestone down a quiet country road. Now here, unfortunately, is the creepy part: four women were murdered and dismembered here in 1969. That dirt road in the woods and the isolated cemetery seem more unsettling once you know that detail.

On January 24, 1969, two young women from Providence, Rhode Island checked into a rooming house in nearby Provincetown. Patricia Walsh and Mary Ann Wysocki, both 23, were introduced by the landlady to another guest, a 24-year old local carpenter named Antone "Tony" Costa. Costa, who was tall and clean cut, helped Walsh and Wysocki carry their bags to their rooms. Walsh and Wysocki vanished shortly afterwards. Their car was spotted abandoned near a marijuana patch behind Pine Grove cemetery, but then it too vanished.

The police began digging and found four bodies in the sandy soil behind Pine Grove. Two of them were Walsh and Wysocki. The other two were Sydney Monzon, 18, of Eastham, who had vanished on Memorial Day of 1968, and Susan Perry, 17, of Provincetown, who had been missing since September 8, 1968. The families of Perry and Monzon had assumed their daughters had simply run off. It was the Summer of Love, after all, and many young people were leaving home to become hippies.

The police soon located the missing car in Burlington, Vermont, where Tony Costa was paying for its storage. He was quickly arrested and charged with murder. Many local women, including the daughter of novelist Kurt Vonnegut Jr., testified that Costa had invited them to visit his marijuana patch behind Pine Grove cemetery. Luckily they had declined.

The details of the murders are grisly. The four women had been all been dismembered. Blood stained rope was found tied to a tree and in Costa's room at the boarding house. The local DA claimed that cannibalism had also occurred, but that was later recanted.

Costa was charged with murdering three of the four women, but during his trial other suspicious incidents came up. He had driven to Pennsylvania with two young women who disappeared, as did a woman he lived with in San Francisco. A woman he dated had been found drowned in her bathtub. Costa was ultimately suspected of murdering eight women, but was convicted only of murdering Wysocki and Walsh. He received a life sentence. Costa committed suicide in his cell at Walpole State Prison in 1974. He was 30 years old.

Those are the facts in the case, but as you might imagine these murders have entered local folklore. It's hard for a small town to forget something so grisly and legends are often how communities remember their past. 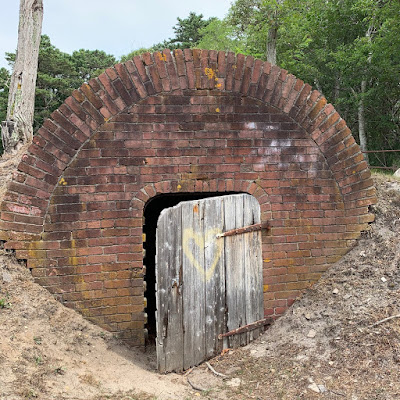 The most persistent legend I've read is that Costa used this brick crypt to dismember his victims. I'm not sure if that story is true. The crypt is in the cemetery, and I think the actual crimes occurred in the woods behind Pine Grove. Still, the crypt is the main destination for legend-trippers. Anomalous structures (like an empty crypt with an unlocked door) tend become the focus of legends. 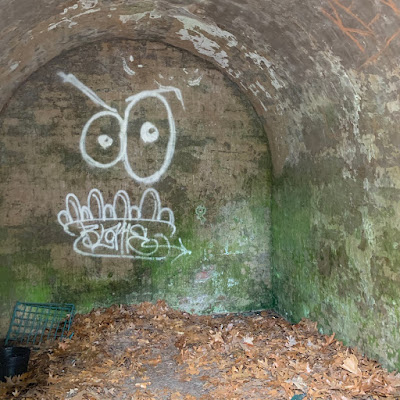 Note: I didn't enter the crypt, but only stuck my phone inside. I think historically this crypt was just used to hold bodies awaiting burial - no one is entombed inside it - but it still felt wrong to go inside. In 2007, paranormal investigators reported some strange things in the crypt, including Electronic Voice Phenomena and the sudden loss of power to their equipment. But were these just the normal ghosts one would expect to find in an old cemetery, or were they associated with the 1969 murders? 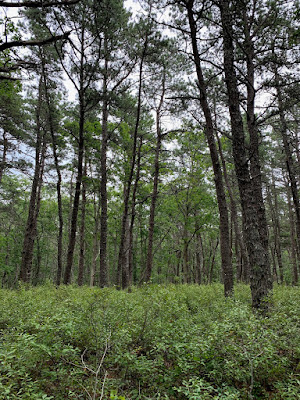 The grave in the woods where the women was buried is long gone, hidden away by the undergrowth and trees, but Tony and I still walked down the dirt road behind the cemetery. It was very, very quiet in the woods. The cemetery had been full of birds and grasshoppers, but the woods were completely silent. It was unnerving. Maybe the birds just like the cemetery's open landscape more. Maybe the woods hold a memory of what happened. Either way, we were alone nearly a mile from the main road where something terrible had occurred. It was not a good feeling. 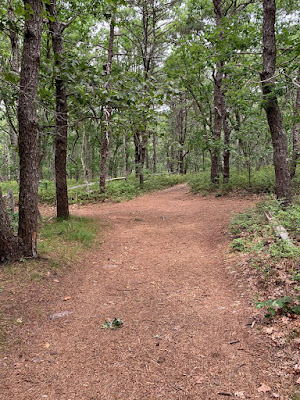 I took a photo of this crossroads we came upon. There have been legends and myths about crossroads for millennia, and they are said to be places where people can encounter ghosts, underworld deities, and the Devil. When I saw this I thought,"This would be a really creepy place to be at Halloween." Apparently I was not the first person to think along these lines. Evelyn Lawson wrote the following in The Provincetown Register in 1969:

"As Dinis (the district attorney) talked... I felt my skin prickle in dread and disgust. The place where the bodies had been found... was near an old cemetery, not far from a back dirt crossroad, the typical traditional site for the witches' Sabbath..." (quoted in Life Magazine, July 25, 1969)

Just to be clear, no witches were involved in these murders. Modern witches follow a spiritual or religious path and don't sacrifice people in the woods. It's probably just a coincidence the murders happened near a crossroads, but it does add some creepy resonance to the situation, and there have been rumors that people conduct sinister rituals in the woods. I didn't see any signs of ritual activity and I think they are just rumors. Costa apparently was interested in the occult and had books about magic in his cell at Walpole, which has probably added fuel to the rumor that Satanic activities happen in the woods behind Pine Grove. 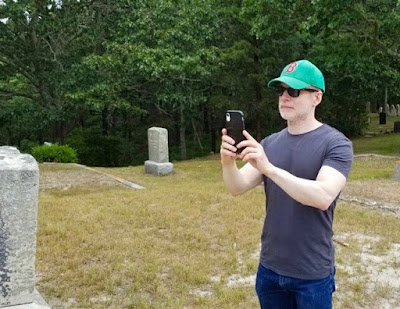 Would I visit again? I'd definitely go to the cemetery again, which is beautiful and historic. The crypt was a little off-putting, but nothing too scary. The woods behind Pine Grove were pretty creepy, though, and I'm not sure if I would go back. A little advice: if you decide to visit please don't go alone. Even if there aren't any ghosts it is still an isolated spot where something terrible happened. It's better to be safe than sorry.

Great report, Peter. And quite a chilling and sad story. 👍👍

Thank you. I don't often write about true crime because I find it unsettling.

Just went to this cemetery today. Didn’t feel any bad vibes there or on the trails beyond, but a large black poodle did appear suddenly and scared the bejeezus out of my party. Overall, however, a very peaceful and beautiful place.

I was driving around exploring The Cape yesterday and drove past the Pine Grove Cemetery sign. I thought '1799, that's old, turn around and check it out'. I love serendipity and found it through the woods wondering how far and what it would look like. I admit, I felt just a bit cautious as I hit a 1/4 mile. But then a little further there it was, beautiful in its' setting,Rustic but well kept.
I drove around to the far side near 'the crypt'. I was compelled to take a picture, I liked the composition of the brick and the little wooden door ajar tucked into the hill. I had just come from Mass and it's Lent so I, of course, think of the Resurrection. I edged closer for a peek and was bummed, but not surprised, when I saw the graffiti. Kids gotta be cool.
I drove halfway through and stopped at the Zaccheus Rich family plot. I liked what it said under his name and his wife Lydia's name.
This morning I just wanted to know more about this family. They lost 4 kids, the oldest only made it to 19. But, were there others who died much later but buried elsewhere? I thought it was sad that the parents lived to 80 and 82 without their children. Yet, under their names it said 'God is Love' and 'Resting in Jesus'.

And that's how I came upon your Folklore story in the search. It was fascinating and upsetting to read the history you had gathered. Thank you for that! I mean that sincerely. Fast forward to 1969 and a different take on humanity!
Though I believe all souls are healed in death, even Tony who pissed me off, I understand the realities of the temporal world. My next venture to Pine Grove Cemetery will be different, but I still need to explore on my own. I just know more now.