As the days grow shorter my thoughts turn once again to old stories about witchcraft! Those of us in New England are lucky to live someplace blessed with an abundance of strange and spooky witch tales.

I am particularly fond of witchcraft accounts from the 17th century, back when the Puritans were establishing their settlements in a land much different from the one they left behind. Demons and monsters were thought to lurk in the woods, but even scarier things could be hidden inside the walls of a neighbor's home. The Puritan witchcraft stories read like horror films or dark fairy tales. 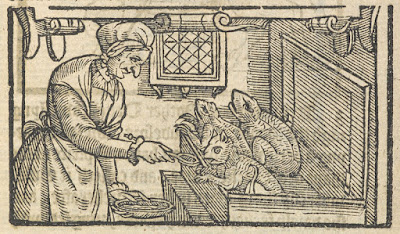 For example, here is some testimony from Abraham Perkins of Hampton, New Hampshire. One evening in November 1662 while he was walking by the home of Goodwife Eunice Cole he heard two voices in conversation. Goody Cole had been widowed earlier that year, so he was curious who was talking with her at night. He paused near her house and listened:


I heard a discoursing . . . and, harkening, I heard the voice of Eunice Cole and a great hollow voice answer her, and the said Eunice seemed to be discontented with something, finding fault, and the said hollow voice spake to her again in a strange and unworldly manner . . . as if one had spoken out of the earth or in some hollow vessel...

Perkins was disturbed by this, so he ran and brought two friends back to her house with him. The three men stood outside and heard more strange things:

That testimony sounds like something from a horror novel or a very dark fairy tale. The great hollow voice is creepy enough, but the shimmering red  color is the perfect ending to Perkins's account.

In addition to dealing with infernal forces, Goody Cole also supposedly had a penchant for stealing children. Well, at least she tried to steal children, but they always got away. Here is testimony from Sarah Clifford of Hampton, who claimed in 1673 that Goody Cole tried to steal away nine-year old Ann Smith:


... and then the child told her that there came an old woman into the garden with a blue coat and a blue cap and a blue apron and a white neck cloth and took this girl as she told us by the hand and carried her into the orchard and threw her under a pearmain tree, and she was asked to live with this old woman and she said if she would live with her she would give her a baby and some plums... (quoted in David Hall, Witch-Hunting in Seventeenth Century New England, 1991)

Young Ann Smith refused Goody Cole's offer. In response, Goody Cole threatened to kill her and then allegedly struck her on the head with a rock. The girl said that Goody Cole then turned into a dog, climbed a tree and flew off. 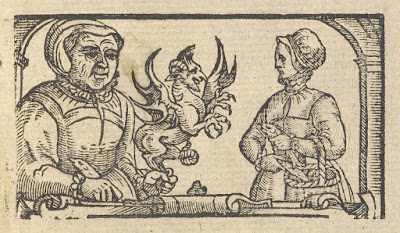 Goody Cole was a childless elderly widow. Maybe she really did want the little girl to come live with her. Maybe the encounter did turn violent. But did she really turn into a dog and fly away? The testimony is a mix of the realistic and the fantastical, like "Hansel and Gretel" set in coastal New England.

Cole was arrested and tried for witchcraft three times. She spent several years in jail but always avoided the gallows. Despite being whipped and serving time Goody Cole still filled the people of Hampton with fear.  Everything from minor household mishaps to major accidents were blamed on her. In 1657 eight people drowned when a small ship sank in the Hampton River. According to tradition Goody was to blame (although she was jailed at the time), and the incident was popularized in a poem by 19th century poet John Greenleaf Whittier:


"Fie on the witch!" cried a merry girl,
As they rounded the point where Goody Cole
Sat by her door with her wheel atwirl,
A bent and blear-eyed poor old soul.
"Oho!" she muttered, "ye're brave to-day!
But I hear the little waves laugh and say,
'The broth will be cold that waits at home;
For it's one to go, but another to come!" (John Greenleaf Whittier, "The Wreck of Rivermouth", 1864)

Even after she died in 1680 the strange stories about Goody Cole continued. Legends say her body was buried at a crossroads. To keep her from causing mischief after death the citizens of Hampton drove an iron stake through her heart. Just to make sure the magic worked they also placed a horseshoe on top of her as well. But it's hard to kill a legend or a fairytale. In 1938, as Hampton celebrated its tricentennial, several people claimed to see Goody Cole's ghost walking through the oldest parts of town. The town posthumously pardoned her for being a witch that same year. 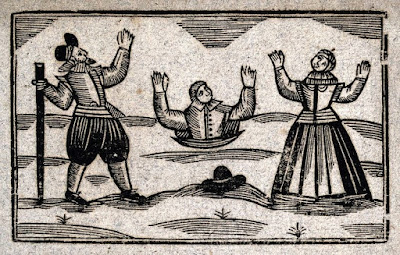 I know that fairy tales aren't true, and neither are these scary stories about Goodwife Eunice Cole. If anything, the real scary story is how an elderly woman was harassed and accused of demonic crimes by her neighbors for decades, simply because she was a curmudgeonly widow. But even if the stories aren't true I still get a thrill reading about hollow voices speaking from the earth and strange red lights shimmering by the chimney.

Thanks for the story about Goody Cole. As a kid growing up in Hampton, this story always fascinated me. To this day, I still think about her quite often! And thinking about it as an adult, it fills me with sadness that this woman was punished so severely — she was an elderly widow when she was thrown in jail and whipped (!) for being a witch. It's hard to wrap your mind around that.

Of course, Hampton had another famous brush with the occult a century later when General Jonathan Moulton made his pact with the devil. His house still stands at the edge of town.

Thanks for the comment Tom! Witch stories are scary no matter how you look at them. They're scary because they're about the spooky supernatural happenings, but then they're even scarier when you realize they are really about society persecuting misfits. And yes, the Jonathan Moulton legend is a great one too!

Thanks for the post Peter! It is all too common a theme in these stories for a woman, especially an elderly one, who lives alone is accused of witchcraft.