Well, summer is in full swing. One nice thing about living someplace with long winters is that I really appreciate all the vegetation when it finally appears in the summer. Everything here is bare for so long in the winter months. Every bit of green looks great when it shows up, even the weeds.

I think "weed" is basically just a derogatory term. Really, a weed is just a plant growing somewhere people don't want it. It's not an actual scientific category. Many of the plants people call weeds have interesting histories and folklore attached to them. Some might even have magical powers. Intrigued? Read on. 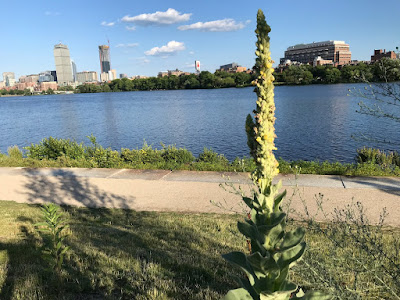 One of the most dramatic weeds plants that appears in the summer is mullein. You've probably seen it because it's hard to miss. Mullein has a single stalk that grows up to six feet in height and is crowned by tiny yellow flowers. Its leaves are grey and lightly fuzzy. Mullein is very dramatic. It looks like it comes from another planet.

It doesn't, but it's not native to New England either. Mullein is indigenous to the Mediterranean and over time spread across Europe, Asia, and North Africa. When the Europeans colonized the New World mullein hitched a ride across the Atlantic with them. Its official name is verbascum thapsus, a Latin term whose origin is uncertain but is most likely derived from the words barba (beard) and Thapsos (a name of several Mediterranean cities). It's English name, mullein, probably comes from the Latin word mollis, which means "soft." And just an FYI, it's pronounced "mullen," not "mullane." 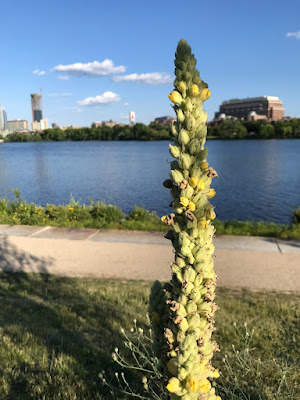 There are several varieties of mullein worldwide, but the plant that grows in New England is called "great mullein."' The plant also has several colorful folk names. Some are inspired by its long central stalk: Aaron's Rod, Jupiter's Staff, Peter's Staff and Shepherd's Club. Others come from its soft fuzzy leaves: Our Lady's Flannel, Blanket Herb and Beggar's Flannel. The dried plant was used as a torch, and its leaves as wicks for lamps and candles. Witches were said to be particularly fond of using the plant for these purposes, so mullein is sometimes called Hag's Taper. Very witchy!

Mullein can also be used to repel evil spirits and harmful magic. According to Mrs. Grieves's A Modern Herbal (1931):


Both in Europe and Asia the power of driving away evil spirits was ascribed to mullein. In India it has the reputation among the natives that the St. John's Wort once had here, being considered a sure safe-guard against evil spirits and magic, and from the ancient classics we learn that it was this plant which Ulysses took to protect himself agains the wiles of Circe.

Mrs. Grieves is referring to an incident in Homer's epic poem The Odyssey. Odysseus (Ulysses in Latin) and his men land on an island ruled by Circe, a witch-like goddess. She turns Odysseus's men into pigs, but Odysseus is given a plant called moly by the god Hermes which protects him from her magic.

On an interesting side note, perhaps you are familiar with the exclamation "Holy Moley!" This phrase was popularized in the 20th century by the comic book hero Captain Marvel, who would say it when he was faced with surprising situations. 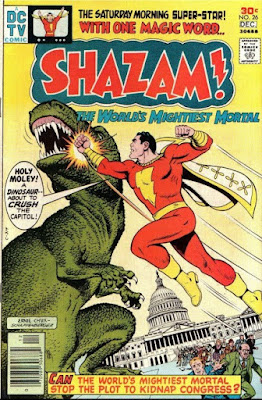 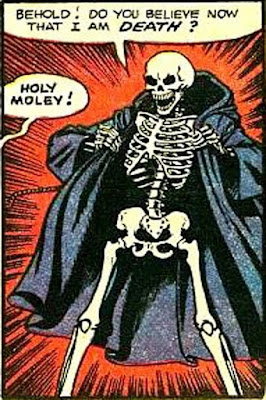 The creators of Captain Marvel were well-versed in classical mythology; the Captain got most of his powers from the Greek gods when he shouted out the magic word "Shazam." The phrase "Holy Moley" (sometimes spelled "Holy Moly") seems to be older than Captain Marvel comics, though, and it's exact origin is unclear. Some theorists claim it is derived from "Holy Moses," others that it honored Teddy Roosevelt's adviser Raymond Moley, and still others claim it comes from the holy red thread of Hinduism, the mauli. Those are all good theories but I like the Greek mythology explanation the best, even if it is not really true.

Independent of its connection to Homer people have still ascribed magical powers to the plant. For example, in her 1896 book Current Superstitions, Fanny Bergen recorded the following belief from Newton, Massachusetts regarding mullein:

Twist a mullein-stalk nearly off after naming it. If it lives, he or she loves you; if not, not.


This is an example of the many simple love spells that are found in 19th century New England folklore. Most are aimed at determining if someone loves you. For example, if you think three people might be in love with you, you would take three apple seeds and name them after the three people. Then you would wet them with spit and stick them to your forehead. The last seed that falls off tells you who loves you.

This mullein spell works on a similar principle: the behavior of the plant indicates the intentions of the beloved. You think John Doe might be secretly in love with you. You find a mullein plant and name it "John Doe," and then twist the stalk. If the plant survives it means that John Doe really does love you. 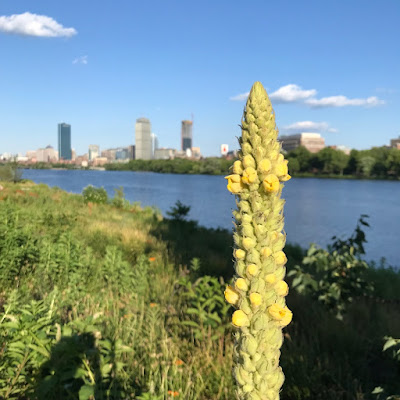 Personally I don't think you should do this. Mullein has such a short growing season and is such an interesting plant. Don't hurt it! If you do want to work some magic with mullein, maybe you can wait until the fall and harvest the dried central stalk. Then you can use it as a torch to light your way to the Witch's Sabbath, which is probably more fun than going on a date with John Doe anyway.

In addition to Wikipedia, my other additional sources were Pamela Jones's Just Weeds: History, Myths and Uses (1994) and Paul Beyerl's A Compendium of Herbal Magick (1998).