The Ghost Dog of Boston College

The other night I dreamed that I was being chased by a large invisible dog. It had been sent to kill me by some unnamed enemies. It never caught me, which I take as a good omen. I think I had this dream because before I went to sleep I was thinking about the one time I was actually bitten by a dog.

We tend to think of dogs as man's best friends, but there is a long history of ominous dogs in art, literature and folklore. Quite often they are associated with death. For example, European legends tell of the Wild Hunt, a band of demonic hunters and ghostly hounds that roam the land during the dark months of the year. Anyone who sees the hunt will die, so it's a phenomenon best left unexperienced. Other sinister black dogs can also be found in English folklore, including the infamous Black Shuck of East Anglia. Going further back in history, the Greeks claimed the underworld was guarded by a three-headed dog named Cerberus, while the Egyptian god of embalming had the head of a black canine.

These tales may sound like quaint stories from the distant past, but ghastly dogs still continue to rear their toothy heads. For example, the psychologist Carl Jung had the following dream:

"I was in a forest - dense, gloomy fantastic, gigantic boulders lay about among huge jungle like trees. It was a heroic , primeval landscape. Suddenly I heard a piercing whistle that seemed to resound through the whole universe. My knees shook. Then there were crashings in the under brush, and a gigantic wolfhound with a fearful, gaping maw burst forth. At the sight of it, the blood froze in my veins. It tore past me, and I suddenly knew: the Wild Huntsman had commanded it to carry away a human soul. I awoke in sudden terror."


When he awoke Jung learned that his mother had died in the night. The Wild Hunt struck again.

Demonic hounds also appear in art, both high- and low-brow. In his novel The Western Lands William S. Burroughs writes about "door dogs" which are "not guarders but crossers of thresholds. They bring Death with them." If post-modern novels are not your cup of tea, you can also find demonic dogs in horror movies like 1978's Devil Dog: The Hound of Hell.

Here in New England, our most famous creepy canine is probably the black dog of Connecticut's West Peak. He's an adorable little black terrier, but you can only see his cute fuzzy face twice. If you see him three times you'll perish. This part of the country was first colonized by East Anglian Puritans, and it's tempting to see a connection between this black dog and the better-known English Black Shuck.

This has all been preamble, because what I really wanted to write about this week was Boston College's O'Connell House. O'Connell House was built in the 1890s as a private residence and was eventually left to Boston's Archbishop William O'Connell. O'Connell in turn gave it to Boston College. The 32,000 square foot mansion currently serves as the school's student union building. 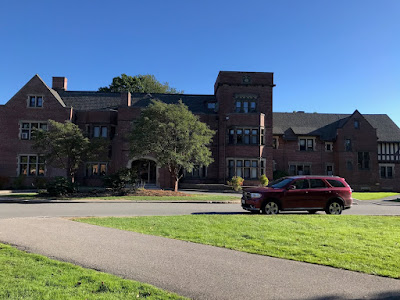 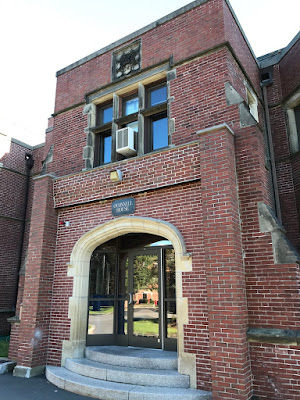 As befits an old building on a college campus, there are a lot of ghosts stories attached to O'Connell. One of the ghosts that appears at O'Connell is said to be a small dog. In the October 31, 2002 issue of The Boston College Chronicle, one of the building's five resident student managers claimed she sometimes saw it in her room:

"Every now and then I'll be lying in bed and see this little dog sitting under my desk looking at me...  It's there and then it disappears. It's kind of eerie and definitely a mystery."


None of the resident managers owned a dog, of course. It was clearly a spectral being. 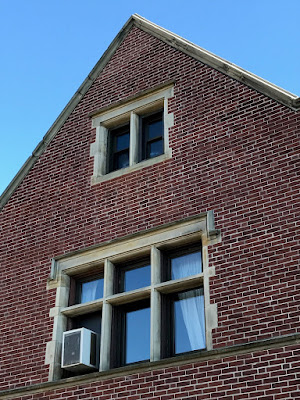 According to Zach Barber, O'Connell House manager and A&S '04, Warren sensed three spirits in the house.

"She said that there were two ghosts in the attic that either hanged themselves or jumped, and there was also a dog spirit that she said was following her around the house," said Barber." She also said, "You must hear furniture moving around up there (in the attic) all the time." Barber confirmed that some O'Connell House staff members have, in fact, reported hearing such noises on the ceilings of the rooms below the attic in the past." (The Heights, Volume LXXXII, Number 22, 23 October 2001)


Boston College students have various theories about what the ghosts are: one is a child who drowned in a fountain, one is a madwoman who had been confined in the house, another is someone killed by a jealous lover. I haven't read any theories about the dog, though. 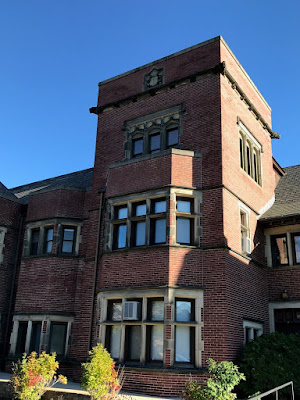 Why is this dog so well-behaved compared to some of its folkloric counterparts? Perhaps the students raise enough hell on their own and don't need any help from the dog, or perhaps the school's culture of Catholicism and rational inquiry help keep the little beast in check. Or maybe he's just a lonely little ghost-dog looking for affection. Hopefully we'll get some answers when the next group of psychics investigate O'Connell House someday in the future.

A great piece. Readers may be interested in the episode on Black Dogs and the Wild Hunt on my Folklore Podcast, which is totally free. Based on research from my book Black Dog Folklore.

Hi Mark! Thanks for the comment. I am glad you liked the post. I wrote about some other black dog sightings a few years ago: https://newenglandfolklore.blogspot.com/2012/08/black-dogs-swamp-and-some-ufos.html

I have added your book to my reading list!

Another fascinating post. It reminded me of the term "black dog" to describe a crippling depression: http://www.bipolar-lives.com/winston-churchill-and-manic-depression.html

Hi Robert! I'm glad you liked the post. It's interesting how the same imagery appears in different ways. When I was looking for black dog information I stumbled on that Churchill story, which I had not seen before. Maybe in some other era Churchill would have said his black dog was a spirit or a ghost?

Who would have thought a spirit dog bringing death would be cute? Amazing! Well, Harry Potter uses the black dog thing, although the black dog turned out to be Harry's godfather, Sirius Black, not the Grim. And the Cerberus dog was called Fluffy(Hagrid bought him from some Greek fellow at the pub...)

Translation and info: Who'd Have Thought?

Hi Brett! Thanks for the comment. The line between fact and fiction is always tricky, as I'm sure you've seen in your Lovecraft research. People probably take the Black Dog story as legend because it seems just like the other black dog legends in the past. I wonder what inspired Pynchon?

No worries. Peter Rugg, also born in fiction, shows up in literature as a real haunting; Nadler, for example, includes him in her Ghosts of Boston. Poor Rev Moody in York is more Hawthorn than history as well.

Amused to find this, as I’m a current Boston College junior who wrote a piece on O’Connell House’s ghost-stories my freshman year. Link here, if you’re interested: http://bcheights.com/2016/02/28/in-oconnell-house-supernatural-experience-spooks-residents/. The prose is a bit purple, but my editor wanted that. I’ve long been a fan of your website—I love folklore, especially NE folklore—and this just puts the icing on the cake!