Recent UFO Sightings, Plus the UFO I Saw As A Child

While we were all busy celebrating the holidays last month, some people spent December seeing strange lights and objects in the sky. I don't think any of them were flying reindeer. Read on!

On the night of December 10, someone in the Maine town of East Baldwin reported seeing an enormous flying craft the size of a football stadium. It was accompanied by two smaller objects flying next to it. The witness had trouble seeing the largest UFO clearly, and speculates that some type of force field may have been responsible.

That's all pretty strange, but it gets stranger:

As the formation approached, I was hit with a wave of nausea, felt anxiety and fear. One of my K-9's ran off back to the house and the other cowered behind me. Both have been agitated ever since and hesitant to go out at night. I have felt ill and uneasy ever since as well. I later heard that there were an unusual number of ambulance calls in the area for anxiety or heart attacks the following day. I looked online and saw that another Maine couple in Windsor saw the giant craft that night and fell ill themselves. I am a trained observer and out every night with my dogs. I have seen many other "craft" but never so close as to be able to determine that they were not made on Earth (that we know of). I am concerned about the health effects of whatever force field overflew us at such a low altitude to make us feel instantly sick.

Yikes! That's creepy stuff. Happily, a sighting on December 5 in Kingston, New Hampshire was less traumatic. The witness was inside their house watching TV when they heard a helicopter approaching. This was unusual so the witness went outside to see what was happening. The helicopter was not yet overhead, but some type of large dark object was. It did not have any lights on it and the witness was only able to see it because it blocked out the stars overhead. Before it flew off the witness saw a single pale red light appear on the flying object. After it disappeared from view the helicopter finally appeared and flew off after it, as if in pursuit.

On December 14, someone outside taking a cigarette break from work in South Burlington, Vermont took a photo of the moon. They didn't notice anything unusual. When they went back inside and looked at the photo they noticed the following: 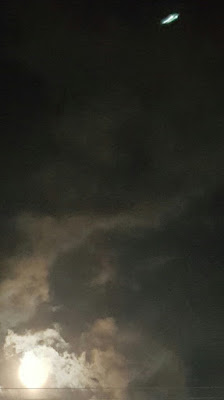 Is it an alien craft? A lens flare? An airplane? I don't have a clue. I suppose that's what makes these flying objects unidentified.

There were also UFO sightings during December in Connecticut and Massachusetts. Surprisingly, there weren't any reported in Rhode Island. I'm not sure why that is. Perhaps Rhode Islanders have better things to do than look up at the night sky, or maybe Rhode Island is so small that UFOs fly over it before they have a chance to be seen? OK, I'm kidding on both of those, but I do wonder why no one reported any UFOs there.

I found all these reports by looking through the MUFON database online. MUFON, or the Mutual UFO Network, has been collecting UFO reports for decades and they are a great source if you like to read about UFO sightings, which I do. I grew up in the 1970s when UFOs were everywhere in popular culture and I still have a fondness for them.

When I was very small, my brother, a young neighbor and I once saw a UFO. It was nighttime and we were standing in our backyard when we saw a very bright light descend from the sky and go down behind a hill. We were terrified. We ran into our house and told my parents what we had seen. I don't remember their response, sadly, but I don't think they were particularly concerned.

What I do remember is the amazement and fear that I felt. I had seen something from another world. It was thrilling but scary. Would we see alien creatures next? That thought terrified me. My brother and our neighbor felt the same way; our neighbor's parents were out and he refused to go home until they came back later that night. I seem to recall being afraid that something would look in my bedroom window (even though I slept on the second floor). I suppose I can understand why the witness in East Baldwin felt sick and uneasy, even if a force field was not present.

We were quite young (I was only in elementary school, if not kindergarten) and the media was full of UFO stories at the time. It's no wonder we were freaked out. Did we really just see a falling star? A lone bottle rocket? A very silent helicopter? It could have been any of those things, or maybe it was something else entirely. It truly was unidentified.

People have been seeing strange lights in the night sky since history began. In the past they might have been explained as gods, angels, ghosts, or special omens. Astronomy can now explain most of the things we see in the sky, but every now and then something still manages to slip through the cracks of rationality to remind us of the great mysteries that lurk out in the universe.