How To Make A Witch Bottle (And How They Work)

Last fall I gave a talk in Rowley, Massachusetts about New England witchcraft. As part of my program I showed the audience how to make a traditional New England witch bottle. Most people hadn't seen this before, which made me wonder: what are the public schools teaching kids these days?

I'm just kidding about the public school thing. I don't really think the schools need to teach children how to make witch bottles. But if you are interested in knowing how to make one read on. Maybe if you are a home schooler you can work it into your curriculum!

Witch bottles are an old European form of defensive magic, and were brought to New England by the English colonists when they crossed the Atlantic in the 1600s. The Puritan leadership frowned on any form of magic, considering it all diabolic, but many people in New England still practiced various forms of divination and defensive magic. They believed there were witches among them using malevolent magic, and it was best to fight fire with fire.

Witch bottles work on a very basic magic principle. The English colonists believed that a magical connection was made between a witch and their victim when the witch cursed them. The witch's malevolent magic would flow through this connection, causing illness, pain, and various other torments to their victim.

However, the magical connection was a two way channel. The witch sent pain and suffering through it, but the clever person could send pain along it right back to the witch. This could be done without even knowing who the witch was.

The witch bottle was designed to send pain or even death to an attacking witch. Surprisingly, for something so powerful, it could be made using common items found in any home.

There are only three ingredients: a bottle, pins or nails, and urine of the bewitched person. That last one is kind of gross, but I'll explain why it was considered necessary.

A few notes about the bottle. In some European countries special bottles were sold specially for making make witch bottles. They were usually imprinted with an ugly face, and were often called Greybeards or Bellarmines. Bellarmine was a particularly notorious Catholic Inquisitor, so you can understand why you'd want his image on a bottle that was supposed to defeat witches. I haven't seen any records of Bellarmines here in New England. The early colonists did not have a lot of material luxuries and would have just used whatever bottles were available. 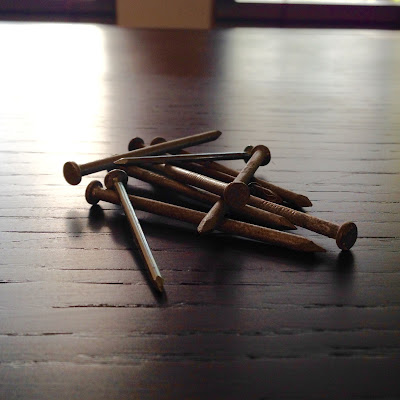 The nails and pins were used to send pain back along the magical connection to the attacking witch. I've seen some modern recipes for witch bottles that include special herbs and things like that. I suppose you could include herbs if you want to, but again I haven't seen any records of that being done in New England. The colonists just used sharp, metal items like needles, pins and nails. If you're feeling creative you could add some broken glass or thorns. Really anything that will cause pain will suffice.


The final and grossest ingredient is urine from the bewitched person. A couple years ago I bought a cute little souvenir witch bottle from a Salem gift shop. It contains herbs, salt, a nail, and a little scroll with a spell. It is sealed with wax. It's really nice, but it wouldn't pass muster in the 1600s because it doesn't have any urine in it. 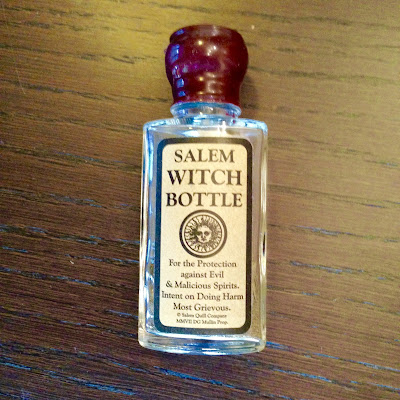 The urine is absolutely necessary for a witch bottle to function. Again, according to the theory behind witch bottles, a witch establishes a magical connection with their victim. This connection links to the victim's physical body. The connection is also linked to any product of the victims body, like their hair, fingernail clippings, or urine.


Many witch narratives from New England tell how a farmer notices that one of his farm animals is acting strangely. Suspecting witchcraft, the farmer will cause pain to his animal by doing things like cutting off an ear or beating it with a stick. The pain he causes to the animal travels along the magical connection back to the witch. Usually these stories end with a mean neighbor being seen the next day with bruises right where the farmer beat his animal or with a missing ear. It was gruesome proof that they were the witch. 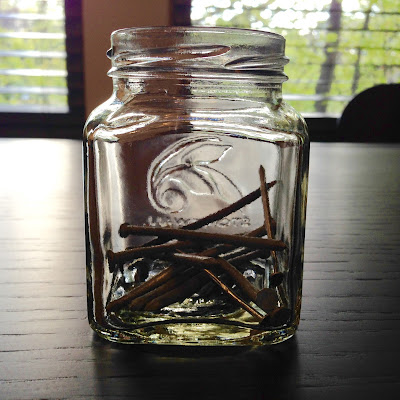 Happily, even the early colonists realized they shouldn't beat the hell out of a bewitched child or cut off a bewitched spouse's ear. But because the magic connection is linked to products of the body, not just the body itself, they didn't need to. Instead they just needed to put urine from the suffering bewitched person into the bottle along with the nails. The urine served as a substitute for the bewitched person's body, and mixing it with the nails had the same effect as actually driving nails into that person's body. Pain from the nails would shoot back along the magical connection to the witch, causing harm to them and forcing them to stop bewitching the victim. 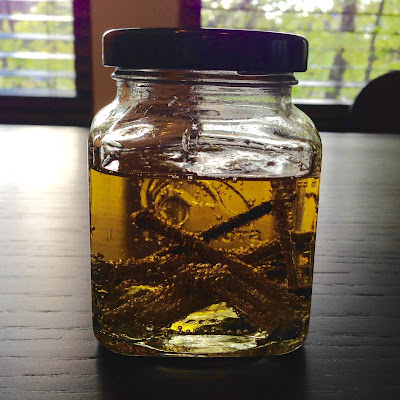 In Europe people would usually bury a witch bottle for safe keeping once it was assembled, and many have been unearthed by archaeologists. Not many have been found here in New England, though, even though historians know they were used. One reason might be that the early colonists often added a final special twist to their bottles. Rather than bury them, they would set them in the fireplace until the urine heated up and exploded, which was believed to send extra pain and suffering back at the witch.

DISCLAIMER: Obviously, don't try this at home. Even if you decide to try making a witch bottle, heating it up will just fill your house with boiling urine, broken glass, and hot nails. It might even be worse than being cursed by a witch.

Thanks, I'll remember this if I ever find myself bewitched. Hopefully the witch would go, "Ouch!" and stop their evil before my urine went too disgusting! ;-)

Hi Sue! Yes, hopefully you wouldn't need to keep it around the house for too long!

Magic scholar Dan Harms created a very informative map showing the distribution of witch bottle based on his research on the subject:
https://www.google.com/maps/d/viewer?mid=12tOJi4n2KP88nC0qNjmR2RmC-N4&usp=sharing

Sadly his article on the topic appears to be in publication limbo - https://danharms.wordpress.com/2014/09/18/on-the-book-of-oberon-and-bellhouse/

While I don't have any information on the one New England witch-bottle Mr. Harms notes on his map, there is a discussion by Cotton Mather of the "urinary experiment":
http://quod.lib.umich.edu/e/evans/N00392.0001.001/1:7?rgn=div1;view=fulltext

Meanwhile the bedeviled family in New Hampshire's Lithobolia incident attempted (and failed) to create a witch bottle to drive off that phenomena:
http://w3.salemstate.edu/~ebaker/chadweb/lithoweb.htm

"On Wednesday the Window in my ante-Chamber was broke again, and many Stones were plaid about, abroad, and in the House, in the Day-time, and at Night. The same Day in the Morning they tried this Experiment; they did set on the Fire a Pot with Urin, and crooked Pins in it, with design to have it boil, and by that means to give Punishment to the Witch, or Wizard (that might be the wicked Procurer or Contriver of this Stone Affliction) and take off their own as they had been advised. This was the Effect of it: As the Liquor begun to grow hot, a Stone came and broke the top or mouth of it, and threw it down, and spilt what was in it; which being made good again, another Stone, as the Pot grew hot again, broke the handle off; and being recruited and fill’d the third time, was then with a third Stone quite broke to pieces and split; and so the Operation became frustrate and fruitless."

There is a different an academic paper on the subject online but you have to register at Academia.edu to read it:
http://www.academia.edu/690132/Buried_Bottles_Witchcraft_and_Sympathetic_Magic

Thanks for the comment and the links. Very cool! I'll have to look into the map Daniel Harms produced. The lithobolia story is interesting in that the witch bottle doesn't work. That's some powerful witchcraft!

In 1962 my father was renovating his parents' 1794 home in St. Catharines, Ontario he found an aged clay bottle full of nails and a dried out liquid above the main door to the house. Next to it was the mummified remains of a cat. The builders of the house-- distant relatives by marriage came from the Mohawk Valley of New York as Loyalists in 1783. The wife, Margaret Van Alystine MacIntee was New Netherlands Dutch on her mother's side from the Albany area. The husband, Philip Gregory (1757-1807) was from Cheshire, England. So, the tradition of witch bottles (and burying cats in the walls of new homes) was transported well into the late 18th century (almost 19th century) at least as far away as Ontario. Dad donated the bottle to the Jordan Museum of the Twenty [Mile Creek Creek], in Jordan, Ontario from which I still have the donation receipt. The mummifed cat was presumably toasted into the farm's brush pile and burned up in a bonefire when enough fruit tree prunings accumulated.
John C. Haynes
St. Catharines, Ontario

Hi John! Thank you for the comment. That's amazing! I had found a story about a witch bottle from New Hampshire that was from the 1770s, but yours is much more recent. I haven't seen any New England stories about burying animals in walls, but I'll have to research to see what I can find. I know it was a common practice back in England.

The only thing that I wasn't clear on is the urine your own, or the person whom you suspect is putting a curse on you?

To clarify, it is your own urine.