This month Animal Planet aired two episodes of Finding Bigfoot that were filmed right here in New England. I'm not a regular viewer of this show, but how could I resist these two episodes?

If you're not familiar with Finding Bigfoot, here's how the show works. The show has four Bigfoot experts (three true believers and one designated skeptic) who travel around the world searching for everyone's favorite hairy hominid. They meet with a group of locals who share their Bigfoot sightings, and then follow up with a few in-depth interviews/investigations. These usually include re-enactments of the sightings, complete with CGI Sasquatches running through the woods. Awesome! 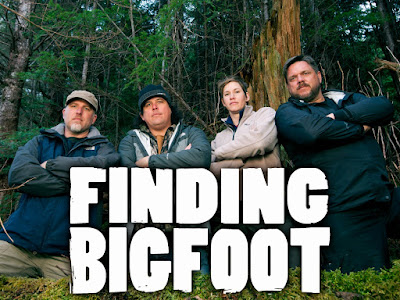 The show's experts also go out into the woods, usually at night, and try to find Bigfoot. This involves lots of night-vision cameras, and people knocking on trees or making howls that supposedly sound like Bigfoot. Let's hope they don't accidentally issue a Bigfoot mating call.


In the episode "Maine's Bigfoot Event," the experts visit the Pine Tree state for the first time. They visit Loren Coleman's Museum of Cryptozoology in Portland. Loren Coleman was writing about weird monsters before the Finding Bigfoot experts were even born, and his museum looks like a lot of fun. I should really take a field trip up there one of these weekends! 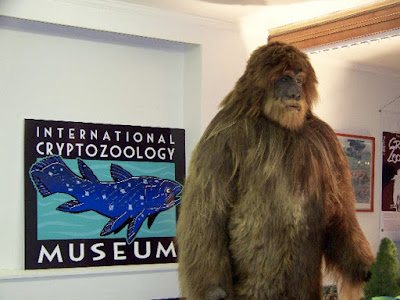 After looking at Coleman's map of recent Bigfoot sightings the experts hold a town-hall style meeting with local residents. Dozens of people raise their hands when asked if they've seen a Sasquatch, and we see a few people tell their stories in more detail. I wonder how long these meetings last in real life? There's no such thing as a boring Bigfoot sighting, but I'm assuming the producers edit out the parts they think are dull.

On this episode we only get to see two re-enactments. In one, a couple feeding chickens behind their house see something large and hair run down a ridge. In the second, a father and son walking in the woods behind their house encounter a gigantic hairy humanoid. When shown how wide the creature's shoulders were, one of the experts says something like, "You saw a big stud." Again, let's hope no mating calls are accidentally issued.

I don't think that Bigfoot is large undiscovered animal, but I do find it interesting that the show's experts usually get some kind of response, whether a distant animal cry or a mysterious knocking sound. The skeptic in me thinks that the woods are always full of noises if you listen hard enough, so it might just be coincidence that they often hear responses. The less skeptical part of my brain is reminded of seances, where the spirits communicate by knocking on tables or blowing out candles. There's always something lurking out there in the dark giving hints that it exists, but it very seldom shows its face.

I liked the Maine episode, but I loved "Grand Bigfoot Hotel" which was filmed in a lot of places I've been. The experts stay at the Omni Mount Washington Hotel, which I've stayed at and is famously haunted. They don't mention the ghost, but they do go wandering at night on the trails behind the hotel. I saw an otter and a huge woodpecker when I stayed there, but sadly the experts don't see Bigfoot.


The local re-enactments include a snowboarder who saw a giant thing walking through the snow, a couple who saw two Bigfoot shaking trees behind their house, and a couple who saw something weird cross the road in Franconia Notch. I've driven through the notch many times, and it is a very dramatic place with huge cliffs and unusual weather. Betty and Barney Hill were abducted by a UFO just down the road, so there's a history of strange things happening in that area.

The experts go looking for Bigfoot evidence near the Frankenstein Cliffs, another place I've visited, but I think the high point of the show is when they recruit a local alphorn player to wander in the woods with them to lure Sasquatch out of hiding. Alphorns are those gigantic horns they play in the Swiss mountains.


Did anyone really think that Bigfoot would show himself after hearing someone play a giant wooden horn? Of course not. But maybe that's not what this show is about.