A few weeks ago I was at the supermarket and something caught my eye while I waited in the checkout line. It was this: 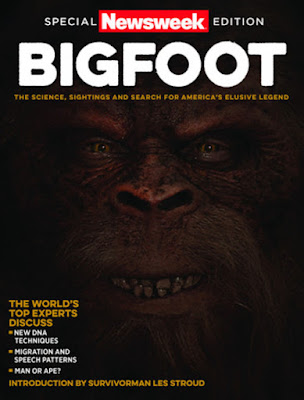 How could I resist? I'm a big Sasquatch fan and have been ever since I was a child. Well, to be honest when I was a child I was really more terrified of Sasquatch than a fan, but I guess I've been interested in him in one way or another for most of my life. He was a big part of the 1970s cultural milieu when I was growing up and it's been interesting to see how this hairy humanoid has once again become a big part of American culture these days. Thank you internet and reality TV!

What's inside Newsweek's Bigfoot: The Science, Sightings, and Search for America's Elusive Legend? You'll find brief interviews with Bigfoot researchers, theories about the creature's origin, and lots and lots of photos. There is also some nice historical information about Bigfoot, including mention of Connecticut's Winsted Wildman (who was seen in the 1890s) and a Sasquatch tale told to Teddy Roosevelt by a hunter.

There was some other weird and interesting stuff in the magazine, like a photo of an alleged fossilized Bigfoot head from Utah. The concept of a petrified Bigfoot head is pretty cool, regardless of whether the rock pictured actually is one.


My favorite part of this magazine is the map showing how many credible Bigfoot sightings have been reported in each state. The map is based on data kept by the Bigfoot Field Researchers Organization (BFRO). Here is the breakdown for New England at the time of publication:

That makes a total of sixty-seven credible sightings. New England may be one of the best regions for healthcare and education, but we are seriously lagging behind other states in our Bigfoot sightings. Washington is the leader with 613 sightings (!), California is next with 431, and Florida comes in third with 306. New Englanders, we need to step it up!

Unfortunately, the magazine doesn't define what makes a Bigfoot sighting credible. (The BFRO notes that they won't publish fake or joke reports, but I'm not sure how they determine what's fake.) I think in general a credible Bigfoot report is one that follows the current cryptozoological model in defining Bigfoot as "a large, hairy, bipedal non-human primate that is distributed over the North American continent to varying degrees of concentration." In other words, Bigfoot is basically an unknown species of animal that we just haven't captured yet. If your report fits into that view of Bigfoot it is credible.

That's the approach taken on reality shows like Finding Bigfoot, where researchers tramp around in the woods looking for physical evidence. Evidence consists of things like footprints, scat, hair and even sometimes structures made from branches. The magazine has a photo of one such structure and speculates it may have been used as a hunting blind by the creature. When walking through a park near my house in Boston I found a very similar structure (see below). Was Bigfoot visiting Boston, or was this just made by teenagers who wanted a place to smoke pot? 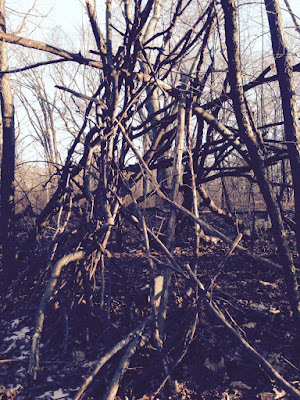 Personally, I don't think Bigfoot is just an undiscovered species of primate, and happily Newsweek's Bigfoot magazine does give some space to alternate theories in a brief section called "Wild Theories." Among those theories are the following:

Bigfoot is actually the Biblical Cain, cursed by God to be extra hairy and wander the Earth for committing the first murder. This theory has its origin in Mormon elder David Patten's encounter with a large hairy creature in 1835. The creature said it was indeed cursed to roam our planet forever and lure men into evil.

Bigfoot is an extraterrestrial and comes from another planet. After all, they are sometimes seen in conjunction with UFOs.

Bigfoot is an extradimensional being who can teleport and appear anywhere, even inside people's homes. Some are good, but some might just be evil...

Some Native American groups think that the large humanoid is a spiritual being here to offer guidance.

I'm a fan of wild theories. Although a lot of Bigfoot stories match the cryptozoological model, many of them don't. Sometimes Bigfoot has six fingers and long beautiful hair. Sometimes he only has three toes or cloven hooves. Sometimes he wears clothing or has a black dog with him. Sometimes he communicates telepathically.

Those weird stories are best explained by weird theories. Are they less credible than thinking that Sasquatch is an undiscovered primate? Definitely, but many people don't think any theory about Sasquatch is credible. A lot Americans believe that Bigfoot just doesn't exist.

There's a spectrum of credibility, with our current scientific knowledge at one end (there is no Bigfoot) and some of the more creative spiritual explanations at the other (Bigfoot is really Cain or maybe an extradimensional being). I'm a fan of the strange and unusual, so I hope people keep reporting Bigfoot sightings that stretch our sense of what is possible.

Another fun blog Peter, thank you! And how could forget when The Six Million Dollar Man met Bigfoot? But alas, my hope for seeing a pic or video of a crypto-monster seems to dwindling especially now with all those high-pixel cameras out there.

I think Bionic Bigfoot came from a UFO, didn't he? The perfect 70s pop culture double whammy. I'm hoping there will be more monster videos now because the cameras are so much more common, but I don't know if they will necessarily be authentic!

Of course, BFRO is just one group that tracks sightings. No pun intended.
There have been more sightings throughout Ct, and Mass just recently. Including fresh tracks in northeast Ct., and just over the line in Charlton Mass., in January, a sighting by a boy and his mother.

Thst area of woods has had several encounters since the 90s.
That doesn't include Litchfield and New Haven sightings.
Either all these people are liars, or its here. Now.
Watch the woods!

BFRO, only lists reports that people voluntarily leave. They are not at fault for not listing all sightings. If you want a great book that just covers New England sightings, then buy Bigfoot Sightings in New England and New York by Paul Bartholomew. It starts with sightings from the earliest explorers to 2006 I think. You can also check out my website at www.bigfootinnewengland.com Thanks, Chuck Kearn

Hi Chuck! Thanks for your comment and the link to your site. Very cool! I will definitely purchase the Bartholomews' book, which looks right up my alley. Let me know if you ever encounter anything interesting out in the woods!