Ghosts for Christmas: "What the Reef takes, the Reef will give back..."

There'll be scary ghost stories
And tales of the glories of
Christmases long, long ago
It's the most wonderful time of the year...

Andy Williams, It's The Most Wonderful Time of the Year (1963)


So what is it about Christmas that goes so well with ghosts? Such a question inevitably brings up the issue of why we celebrate Christmas in December at all.


A few years ago Tony and I went to visit a friend around Christmastime. We looked at her tree, we had appetizers and cocktails, we talked about our lives. As we talked our friend mentioned that she thought her apartment might be haunted by a ghost.

She had heard strange banging noises in the middle of the night. Lights would turn themselves off and on. Items that she placed on her bedside table would vanish, only to show up later in another room. Doors would slam shut when no one was there. She had mentioned these phenomena to her neighbors, who told her that a previous tenant had committed suicide in the apartment. Maybe this former tenant was still lurking around?


When I got home that night I dreamt about a friend who had died recently. I saw him standing in a subway station next to a rack of postcards. He didn't seem sad or scary, simply present. The one odd note was that while alive this friend always wore a brown leather jacket, but in my dream his jacket was black.

Then next morning I told my dream to Tony. Surprisingly, he had dreamt something similar, but about a different friend. It was definitely an interesting coincidence and a little spooky. The Roman poet said that Sleep was the brother of Death. Maybe ghosts are the siblings of dreams? 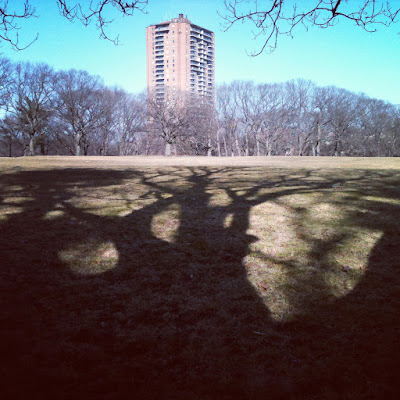 I am something of an agnostic about ghosts. I can't decide if they are objective or subjective phenomena. Many people I know and respect have experienced ghostly phenomena, but most of the uncanny phenomena I've experienced have happened while I am asleep or in that liminal time between dreaming and waking. Something weird even happened to me this week.

I was lying in bed sleeping when I felt someone sit down next to me. I felt someone tap me on the shoulder and heard a man whisper something unintelligible. I woke up quickly and kicked off the covers. There was no one there. It was 3:30 am. I thought, "It must have just been a dream..."

I started to fall back asleep when I heard my cell phone buzz, signaling that someone had sent me a text. I briefly worried it was my mother texting me to say that someone in the family had died. What if the presence I felt on my bed was a relative saying farewell en route to the afterlife? But then I realized my mother doesn't text and I fell back asleep. When I finally checked the phone in the morning there was no text message at all. No one had passed away.

Christmastime has traditionally been the season for ghost stories. Here in North America we tend to celebrate ghosts and the restless dead around late October, when the dark season has only just begun, but in Europe ghosts more often make their appearance around Christmas. For example, ghost stories were an important part of Christmas festivities in Victorian England. Many Victorian families would gather by the fireplace to tell ghost stories after supper on Christmas Eve, and Charles Dickens drew on this tradition when he included the four ghosts in A Christmas Carol.

It makes perfect sense to me. The Northern Hemisphere is at its darkest now, and most of us are walking around in a somnabulant state even during the day. It just seems reasonable that ghosts would pervade our waking consciousness at this time of year. Christmas celebrates the return of the light but we have to go through the darkness first to get there first.

All of which brings me to this week's main story, which is about a haunted lighthouse.

Penfield Reef Light is located about a mile off the shore of Fairfield, Connecticut. The reef is said to be one of the most treacherous areas in Long Island Sound, and the lighthouse was built in 1874 to guide ships safely past it.


In December of 1916, the light was staffed by two men: lighthouse keeper Fred Jordan and assistant keeper Rudolph Iten. On December 22 Jordan decided to row ashore to see his family for Christmas. It wasn't that far a distance, and he was an experienced boater. Sure, the waters were rough but he was determined to spend the holiday with his loved ones.

It was a terrible mistake. The waves were rougher than Jordan estimated, the winds wilder. His small boat capsized a short distance from the lighthouse as Iten watched in horror, unable to aid his partner because of the rough seas. Jordan's body was recovered a few days later on the shore.

Two weeks later Iten was on the ground floor in the lighthouse when he saw Jordan walk down the stairs and enter the room where the log was kept. When Iten followed him into the room Jordan was gone, but the log had been opened to the day of Jordan's death.

From that time on Jordan's ghost appeared regularly at the lighthouse. Iten told the local newspaper:

I have seen the semblance of the figure several times... and so have the others [two assistant keepers], and we are all prepared to take an affidavit to that effect. Something comes here, that we are positive. There is an old saying, ‘What the Reef takes, the Reef will give back.’

Although Iten was spooked by the appearance of the ghost, Jordan's spirit was not malevolent. For example, two boys whose rowboat capsized reported that a man pulled them ashore onto Penfield Reef Light. They assumed that it was the lighthouse keeper, but as they looked for their rescuer they realized they were completely alone on the island. The man who saved them had vanished.

Similarly, a man in a power boat reported that he was guided to safety by a man in a rowboat. Once the power boat was safe the rescuer and his rowboat vanished. Many other sailors have reported seeing a shadowy figure on the lighthouse during stormy weather. Of course, the lighthouse had been automatic and unmanned since 1971...

It shouldn't be surprising that Fred Jordan's ghost is friendly. He was committed to guiding people through the darkness while alive, and kept that commitment even after death.

Thanks for sharing my post! Glad you liked it.