That's a name that rolls off the tongue. Say it out loud: "Old Nabbie." It's a great name for a gold prospector in a Hollywood movie, or maybe it's the name of a farmer's beloved cow.

In reality, Old Nabbie was the name of an alleged witch in Wells, Maine. I just recently found her story and I can't get her name out of my head. Hence, this blog post.

Old Nabbie's story appears in an 1892 book called Witchcraft Illustrated by Henrietta Kimball. The full title is Witchcraft Illustrated. Witchcraft to Be Understood. Facts, Theories and Incidents, with a Glance at Old and New Salem. With Its Historical Resources. That's a really long title, and doesn't roll off the tongue the way Old Nabbie does.

Witchcraft Illustrated is kind of a strange book. In has stories about voodoo, poetry about witches, and theories about how witchcraft works. It has witch stories from Continental Europe and England, and a lot of information about Rosicrucians. Henrietta Kimball seems to have pulled the book together from many disparate sources. 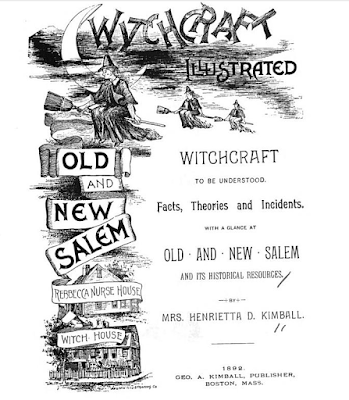 However, the book does have a short chapter about Old Nabbie, a witch that Kimball's grandmother knew in Wells, Maine. Kimball writes:

Nabbie, in the days when a sour visage, a red petticoat, and a black petticoat were sufficient to ruin the character of a Christian, added to these ungodly qualities the offence of living alone in a small black house, untidily kept, and the habit of steeping herbs.


According to Kimball's grandmother, Nabbie's spirit could assume the shape of a black hog. This animal was often seen entering Nabbie's house, and her neighbors assumed it was the witch's spirit returning from causing mischief.

The following illustrates the type of mischief they believe Nabbie caused. One day a woman in Wells was having trouble churning her butter. No matter how long or vigorously she churned the butter wouldn't come together. Clearly, she thought, this must be witchcraft.

Surely this was the work of the devil; and with savage yet solemn determination to be even with her tormentors, she seized the churn with stout arms and emptied its contents into the fire.


The woman then made her way to Old Nabbie's home. When she entered the witch's hovel, she found what she expected. Nabbie was covered in home-made bandages, and the witch explained that she had fallen into the fire. The woman took this as proof that Nabbie had been the one bewitching her butter.

Kimball goes on to write that Nabbie recovered from her burns, and when she died years later was given a Christian burial. Maybe her reputation for being a witch had faded by that time?

This is a classic witch story and illustrates three things:

2. The story also illustrates the coincidences that were used to determine who was a witch. Cooking was not an easy task in the Colonial era. Women cooked over open hearths. They wore long skirts and had to handle heavy iron pots. I read somewhere that pots routinely weighed 30 pounds or more, and sometimes women's clothes caught on fire. If a neighbor had suffered some burns after you threw your bewitched butter into the fire, she was obviously the witch who had been hexing it.

3. Finally, it illustrates how grateful I am to the people who read this blog. Someone named Nicole emailed me asking if I could help her find a certain witch book she remembered from childhood. I couldn't, but she told me about Witchcraft Illustrated. Thanks again Nicole! If anyone ever has interesting stories to share or has questions, please email me. My address is given in the "About Me" section of this blog.