Is There A Ghost In This Photo?

More specifically, is there the ghost of a witch in this photo?

A few months ago I wrote about Mary Nasson of York, Maine. According to legend, Mary was an herbalist accused of witchcraft and her ghost is said to haunt York's Old Burying Ground. The legend about Mary Nasson's ghost has been around since at least the middle of the 19th century.

Recently, a man named Steve (who reads this blog) was visiting York's Wild Kingdom zoo with his family. His daughter posed for a photo in one of those cutouts where you stick your face through a hole. She was alone, but after they took the photo Steve's wife noticed two faces were visible: their daughter's, and the ghostly white face of a woman.

Please note, I have blurred out Steve's daughter's face for privacy reasons. 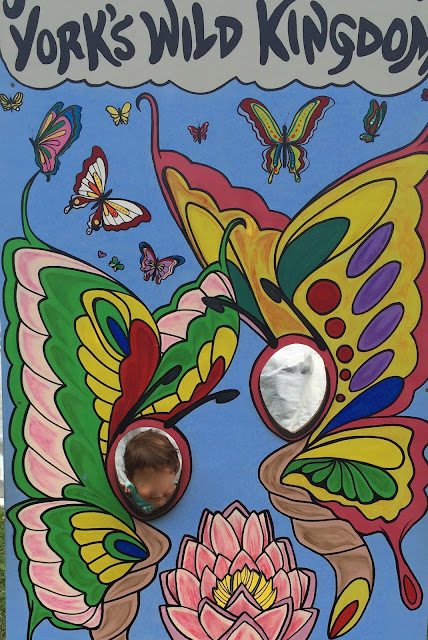 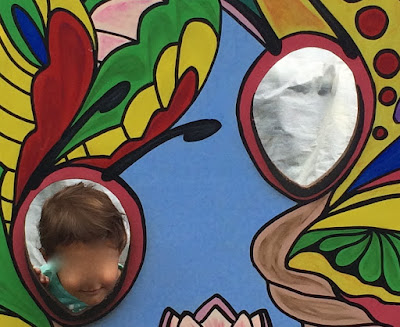 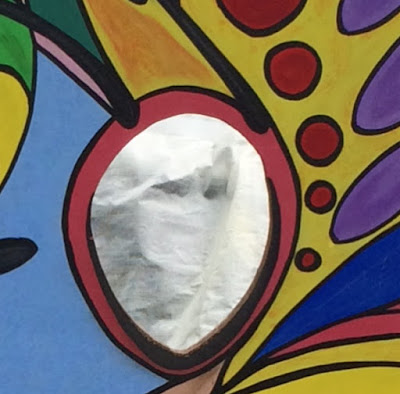 Steve told me that when he saw the face he thought of Mary Nasson's ghost. She supposedly haunts York and possibly was an herbalist, so he thought perhaps her ghost would be attracted to flowers and butterflies.

First off, I have to say thank you to Steve for sending me this photo. It is great! I think it's the creepiest (and therefore best) ghost photo I have seen in a long, long time.

And I also have to thank Steve for sending me another photo that put's everything into context: 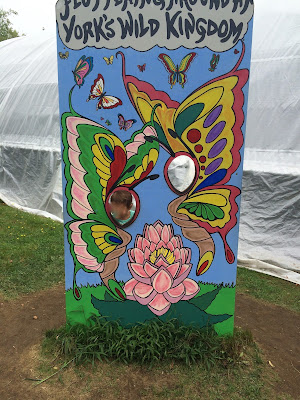 As you can see, and as Steve mentioned in his email to me, the face is caused by the white tarp behind the photo cutout. This is a really good example of pareidolia.

Pareidolia is the tendency of the human mind to see patterns in inanimate objects. In particular, it is the tendency to see sentient, living beings in inanimate objects. For example, think of New Hampshire's Old Man of the Mountain, where people thought a rock formation looked like a human face, or of people who see the face of Jesus in burnt toast. Those are cases of pareidolia.

Many years ago when I was in grad school I read an entire book about pareidolia and anthropomorphism called Faces In The Clouds. The author, Stewart Elliott Guthrie, claims that people are hardwired to see living creatures in the world around them. This is an evolutionary advantage. Is that a stick in your yard, or a snake? It's better to think it is a snake and be wrong than to instantly assume it is a stick. Is that a bear in the dark woods, or just a boulder? A bear might attack you, so it is safer to think it is a bear. You get the idea. Pareidolia helped our ancestors to survive in a dangerous world.

In this case, the pareidolia leads us to ask "Is that a person in the photo, or just some white tarp?" Our brains are wired to see the white tarp as a person.

The word pareidolia comes from the Greek para (meaning "instead of" or "false") and eidolon (meaning "image"). The word eidolon has some interesting supernatural and religious connotations. It was sometimes used to mean ghost or phantom in ancient Greek, and our English word idol is derived from the word eidolon. Depending on your perspective, an idol is either the image of a god, or the false image of a god. It all depends on what you believe about gods.

We all interpret the world around us. Our minds need to filter out most of the sensory stimulus around us or we would be unable to function. So I think when you encounter a case of pareidolia it is useful to ask "Why am I experiencing this here and now?"

If you are a hardcore scientific rationalist, a la Mr. Spock from Star Trek, you might answer, "Oh, that ancient part of my brain I inherited from my hominid ancestors is acting up again. Silly me, there's no face in that tarp."

I am not a hardcore rationalist all the time, and I don't think anyone really is. There are times where I am all about the science, and there are times where I am completely irrational. If I had been reading about Mary Nasson, the ghost witch of York, Maine, and then took a photo in York and saw what appears to be a ghostly face, I might answer, "Hey, maybe that is the ghost I've heard about!"

Of course, it is clearly the tarp. But couldn't a ghost or other spiritual entity manipulate a tarp to show their face? It is the same principal behind the Virgin Mary manifesting in a grilled cheese sandwich, or the monkey god Hanuman manifesting in the bole of a tree in Singapore. We live in a material world, and spiritual entities manipulate matter to send messages to perceptive people.

Well, at least that's the theory. If you don't believe in gods or ghosts it's all just caused by faulty perception. This is not a debate that I can resolve in a single blog post or probably ever...

If you go to York's Wild Kingdom looking for the ghost you might be disappointed. Steve sent one final picture and the face is not visible. Had it only been the wind or the angle of the camera that caused the face to appear? Or maybe Mary Nasson had accomplished her ghostly chore and gone on her way. 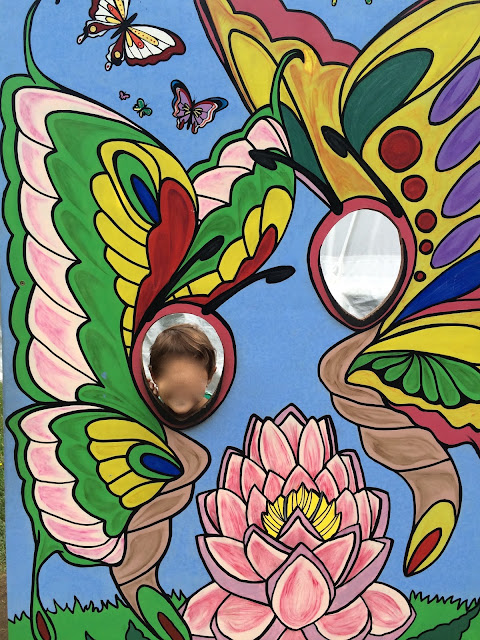 Thanks Annie! Looking forward to seeing you in October!