Here's my second post about some strange and wonderful things I saw a few weeks ago in charming and historic New Haven, Connecticut.

In addition to visiting Midnight Mary's grave at the Evergreen Cemetery, I took a guided tour of the Grove Street Cemetery, which abuts the Yale campus. Grove Street Cemetery is a beautiful neo-classical style burying ground, which means many of the monuments are inspired by the art of ancient Greece and Rome. You won't find many Victorian angels here, but you will find some unusual monuments, like this Roman tumulus (mound) style vault and Grecian sphinx. 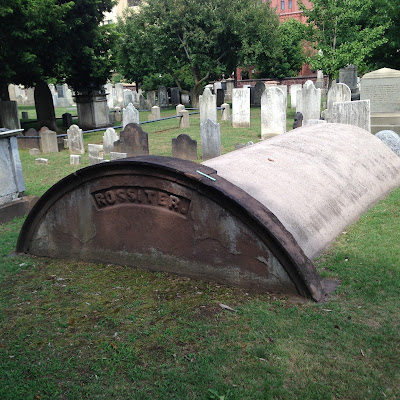 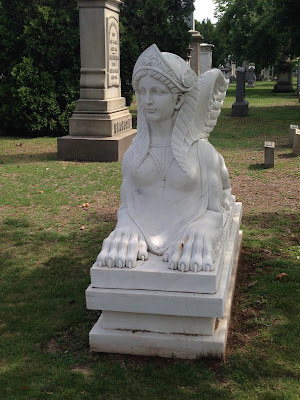 New Haven's first settlers buried their dead under and around Center Church on New Haven Green. This practice continued for 160 years until a yellow fever outbreak led the city's leaders to create a newer, more modern burying ground in 1796. The markers from the old burying ground were moved to Grove Street, but not apparently the bodies. Every now and then a corpse pops up from under the Green, as happened recently when a large tree fell in a storm, revealing a skeleton entangled in its roots.

New Haven was a prominent mercantile city and has one of America's best universities, so Grove Street is the resting place for many famous people. On our tour we saw the graves of Noah Webster, Eli Whitney and Glenn Miller, to name just a few. 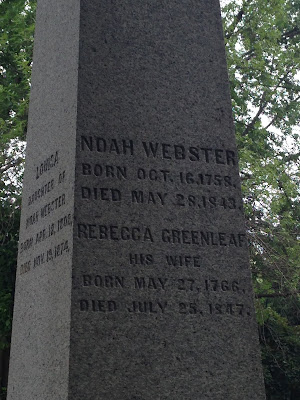 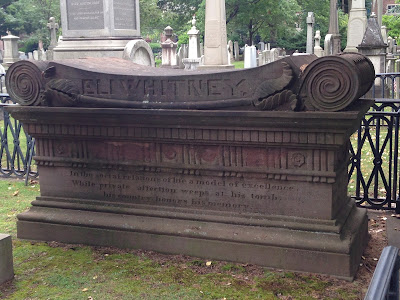 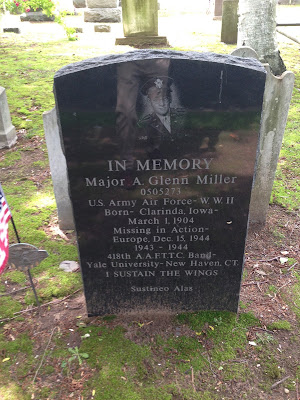 Our tour guide did not tell us any ghost stories, but did address a couple urban legends that surround the cemetery. First, she emphatically denied that any secret tunnels connect the cemetery to the nearby Yale Medical School. Apparently there is a popular legend that in the 19th century enterprising medical students dug tunnels into the cemetery so they could steal cadavers for their experiments. Interestingly, two miles of steam tunnels do lie underneath the Yale campus, and go very close to the Grove Street Cemetery. One of the tunnels is rumored to lead to a basement filled with brains in formaldehyde-filled jars. Again, this is just a rumor, and the steam tunnels are locked and dangerous as they are indeed filled with steam. Don't go trespassing! You will be covered in burns as you are dragged off to jail, which wouldn't be good.

Back to our tour guide. Second, she said she was not able to comment on whether any of Yale's secret student societies conduct rituals in Grove Street Cemetery. She did say, however, that at times she has seen students wearing robes doing something in the graveyard. She left what they were doing to our imaginations, and I in turn will leave it to yours.

I have a good friend who lived in New Haven for many years. He told me that he had heard rumors that someone was leaving sacrificial offerings at the cemetery's dramatic front gate. What did those offerings consist of? He didn't know. I'm sorry I don't have anything more specific to share with you, but sometimes uncertainty makes these urban legends even more interesting. 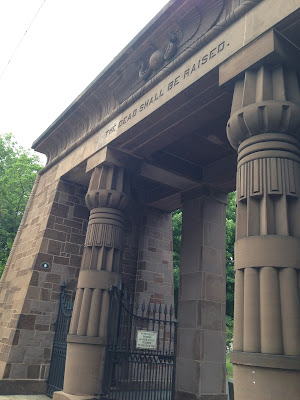 The entrance to Grove Street is very, very dramatic, and I can see why aspiring young occultists might want to leave some offerings at the foot of those Egyptian-style pillars with their ominous inscription. The gate was not built for any occult purposes, however. Egyptian revival was the architectural vogue when it was constructed in 1845, and it was a style the builders felt was not offensive to any Christian denominations. The inscription "The Dead Shall Be Raised" probably strikes a lot of modern people as a quote from a horror movie, but is actually from Corinthians in the New Testament.

If you are in New Haven definitely visit Grove Street Cemetery. It's beautiful, peaceful and full of history. And if peace and beauty aren't your thing, you can ponder some of those rumors and urban legends instead.

Never realized Glenn Miller had a gravesite considering they never found his body. Do you know if this is common for MIA's? ...Bill

Thanks for the comment. I am not sure what the protocol is for MIA burials. There apparently is a grave for Glenn Miller in Arlington National Cemetery as well. Sorry I can't add any clarity. Wikipedia claims there are still more than 73,000 MIA US troops from World War II, which seems like a huge number.

Do You Suffer From NASAL POLYPS Due To Allergies?

You may be eligible if you are a healthy male or female ( not able to bear children) between the ages of 18-65 and:
You have bilateral nasal polyps?
You have 2 of the following symptoms: nasal congestion, nasal discharge/post nasal drip, facial pain/pressure, loss of sense of smell?

This study requires 3 overnight stays in our Clinical Research Unit and outpatient visits.
You will be compensated $6,650 for completion of the study.

Glenn Miller has a cenotaph in this cemetery. A cenotaph is a marker to memorialize someone who is buried elsewhere. I am curious as to why there is one here. Does anyone know of his direct connection to New Haven or possibly Yale?

You can some more information here: https://www.nytimes.com/1999/01/31/nyregion/glenn-miller-s-new-haven-connection.html