"The Cask of Amontillado" is one of Edgar Allan Poe's most famous stories. For those of you who need a reminder, the plot involves a man named Montresor who takes revenge upon his friend Fortunato, who has insulted him in an unspecified manner. One night during Carnival when Fortunato is drunk Montresor lures him into his basement by promising him a rare cask of Amontillado wine.

But instead of giving him wine, he chains Fortunato into a niche and then seals it with stones and mortar. Fortunato cries out, "For the love of God, Montresor!" Montresor replies, "Yes, for the love of God" as he puts in the last stone. The crime is never discovered.


Although Poe's 1846 story is a work of fiction, there is a local legend that it is based on fact. Confused? Read on.

In 1827 Edgar Allan Poe was serving in the military at Fort Independence on Castle Island in South Boston. Poe was a native-born Bostonian, but had acquired quite a bit of gambling debt by the time he was 18. To avoid his debtors and raise some cash he enlisted in the Army under the name of Edgar A. Perry, telling the recruiters he was 22 years old. This part of the story is true. Poe was always living on the edge.


While he was serving at Fort Independence, Poe noticed a gravestone in the fort's cemetery dedicated to Lt. Robert Massie, who died on Christmas Day in 1817. The other soldiers told Poe that Massie had been killed in a duel with another officer, Lt. Gutavus Drane. Drane had never been popular with the enlisted men at the fort, and what little popularity he had vanished after he killed Massie. One night when he was drunk the soldiers lured him into the basement of the fort and walled him up alive. Years later, Poe used this incident as inspiration for "The Cask of Amontillado."

That part of the story is mostly legend, and some of the details are quite murky. Again, Poe really did serve at Fort Independence, but Gustavus Drane was not walled up alive. He was promoted, married, died of an illness, and was buried outside of Philadelphia. Alternately, some versions of the story say the entombed officer was really named Greene or Drake, and Massie's name is sometimes spelled Massey for more confusion.

There is no gravestone for Robert Massie at Fort Independence, but historian and folklorist Edward Rowe Snow claims it was moved to Fort Devens in Ayer. And perhaps the story really is true after all. Rowe also claims that when renovations were being done on the fort in 1905 workers found a skeleton entombed within a wall - and it was wearing a uniform from the early 1800s.

So there you go - fact, fiction and legend are all intertwined at Fort Independence, and it's hard to determine what's true and what isn't. It's a great story though, and sometimes that's what's most important.

Another great story from Castle Island is that a sea serpent was sighted there in 1818. Two soldiers and an officer all reported seeing the large monster swimming in the harbor. There were a lot of sea serpent seen off the coast of Massachusetts in the 19th century, so it does seem likely one was seen near Fort Independence. I'll let others determine if the sea serpent was real or not.

Even if you aren't intrigued by stories of revenge, skeletons, and aquatic monsters Castle Island is still worth a visit. There have been fortifications on the island since 1634, so it's rich in history. For example, it was from Castle Island that the British attempted to bombard the American revolutionaries on Dorchester Heights. Fort Independence is the seventh fort to stand on the island,  and was built in 1801. Sadly you can't go inside it, but the views are great, there's a beach, and the island is connected to the mainland so you can walk, drive, or take the bus there. 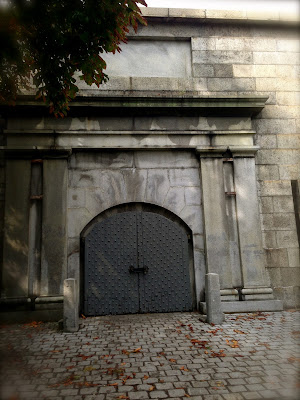 I got most of my information from Stephanie Schorow's East of Boston: Notes from the Harbor Islands. You can find Edward Rowe Snow's version of the legend here; I believe it first appeared in Yankee Magazine in the early 1960s.

You know, I thought I had heard every Poe legend out there, but this one was new to me. Thanks, it's a pretty nifty (if unbelievable) bit of folklore.

Thanks for the comments, Kapitan and Undine!

Thanks for the information about Augustus Drane, Mamacooter!