Did you ever want to summon Satan? You know, maybe become rich and famous overnight without any hard work? Just make sure you read the fine print on that contract Old Scratch is handing you...

Apparently it's not that hard to call up the Devil. According to Clifton Johnson's book What They Say in New England, if you simply say the Lord's Prayer backwards the Devil will appear. I don't know if this charm really works, and I'm not going to experiment. 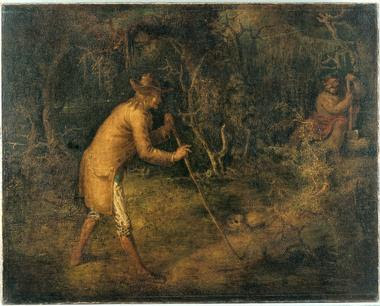 This superstition appears in other New England lore, like the story about two young ladies looking for love who accidentally summon a demon. I don't think it originated in New England, though, since similar beliefs are found around the world. For example, in Newfoundland saying the Lord's Prayer in reverse will summon a terrible hag that gives your enemy nightmares, while Scotsmen who want to meet the Devil trace a circle of chalk and recite the Pater Noster backwards.

It's a belief that has persisted into the present, as a quick search of the Internet will show. It's also related to the Satanic music scares of the 1970s and 1980s when rock stars allegedly backwards messages into their music. Even as late as 1991 a band with the charming name Cradle of Filth put a backwards Lord's Prayer on an album. 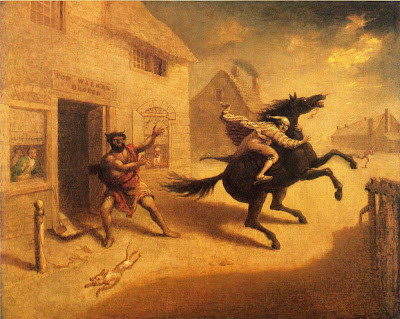 In his classic of 1970s occultism, Mastering Witchcraft, Paul Huson recommends reciting the Lord's Prayer backwards as the first step to becoming a witch or warlock. Not that it will really summon Satan, Huson claims, but rather it will clear the nouveau witch of all that pesky Christian conditioning. Huson is obviously skilled in the ways of magic, since he wrote several successful TV shows, including The Colbys, a spinoff of night-time soap opera Dynasty.

The images for today's post were painted by Thomas Deas and John Quidor in the 19th century, and are illustrations for Washington Irving's story "The Devil and Tom Walker."  Tom Walker is a greedy Yankee who makes a deal with Satan and becomes Boston's most successful loan and mortgage broker. As you can tell from the paintings things don't end well. 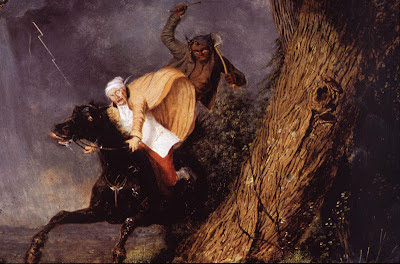 One interesting thing about Irving's story is that Satan is summoned in an abandoned Indian fort in the woodsy wilderness of Brighton, Massachusetts. How our landscape and traditions have changed! These days Brighton is a dense Boston neighborhood full of Boston University and Boston College students, who do their hell-raising primarily with kegs and red plastic Solo cups.

I really like the work that you are doing here and would like to have you on my show, Spooky Southcoast.