My good friend Ed is from Taunton, Massachusetts, and for Christmas this year he and his friend Bill mailed me a box of Hoo-Mee Chow Mein mix. 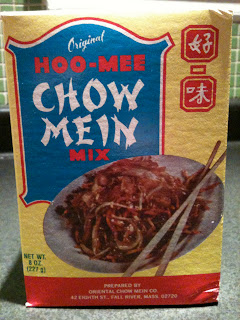 You may think this was an odd Christmas gift, but it was related to a discussion we had a few weeks earlier about one of New England's unusual culinary delights: the chow mein sandwich.

I'm from the Merrimack Valley, so I had never heard of chow mein sandwiches until I met Ed. It's a regional specialty that is found only in Southeastern Massachusetts (particularly in Fall River, Taunton and New Bedford) and in parts of Rhode Island (Pawtucket and Woonsocket). You can also order it at Nathan's Famous restaurant in Coney Island, but it arrived there from New England. 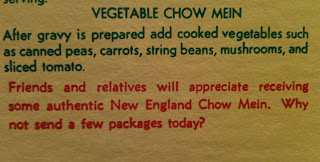 According to Wikipedia, the chow mein sandwich has been delighting New England gourmands since the 1930s. That seems possible, since and chow mein has been eaten in the U.S. since the early 20th century - it's mentioned in Sinclair Lewis' 1920 novel Main Street. Hoo-Mee has been in production
since 1926. 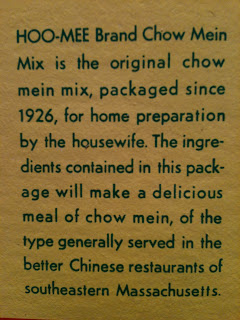 Usually when I write about New England cuisine I focus on old recipes from the colonial or Puritan eras, like Indian pudding, election cake, or cider pie. But folk culture is always changing and incorporating new things. The Puritans didn't care (or even know) about things like Bigfoot, phantom hitchhikers, or chow mein sandwiches, but they're part of our regional cultural heritage today. So I say, "Celebrate New England and have a chow mein sandwich!"


If you don't know how to make one, celebrity chef and Fall River native Emeril Lagasse has a recipe on his website. He instructs the cook to deep fry their own noodles, but for an authentic experience you should just buy a box of pre-fried crispy noodles, like those provided in the Hoo-Mee mix.

Great post! Chop suey sandwiches at the Willows are also a big tradition in my family, and it's interesting to read about the history of this tradition. Plus, Hoo-Mee...hilarious.

Heather and Anonymous - Thanks for the comments. I did not know you could get a chow mein /chop suey sandwich at Salem Willows. I usually go to Salem for the witchy activities, but I'll try to pick up a sandwich at the Willows the next time I'm up there.

Don't forget coffee milk to wash it down!

I don't know if you've read my 2009 blog post on Hoo-Mee, chow mein sandwiches, and Fall River, but I tried to shed some light on the possible origins of the sandwich.

Hi Kate! Thanks for the comment and the great blog!

Kate, what is the name/url of your blog?

Got it, disregard, sorry

The basic veggie chow mein is simple to make. If you buy the Hoo Mee kit, you get the noodles and gravy. The noodles do not stay fresh long so check exp date. You can also make it with, chicken broth,cornstarch,salt,sugar,soy sauce,msg, white pepper and ground celery seed. Just saute veggies and add rest all mixed up to hot veggies in pan, cook till gravy thickens. Grab a hamburger bun, put some fried noodles on top and then a ladle full of chow mein and top with bun, wrap it i wax paper. We brown hamburger or ground pork and add that to it with veggies and serve it open faced style.


nice blog ! it is my first time visit i here.chinese food also best and tast so good. chowmein looks so, spicy and tasty. thankyou for shearing this


nice blog ! it is my first time visit i here.chinese food also best and tast so good. chowmein looks so, spicy and tasty. thankyou for shearing this