Roger Williams wrote that the Narragansett Indians revered thirty-seven different gods. Most of the ancient gods have been forgotten since Williams lived in the 17th century, but a few of them are still acknowledged by the Indians of southern New England. One of them is Maushop, a giant who created Nantucket and other geographic features. I wrote about him a few years ago.

His wife, Squant, is also still acknowledged by the Wampanoag and the Mohegan. Squant's name is most likely derived from Squauanit, meaning "woman's god", one of the deities recorded by Roger Williams. Squant is also known as Ol' Squant and Granny Squannit. 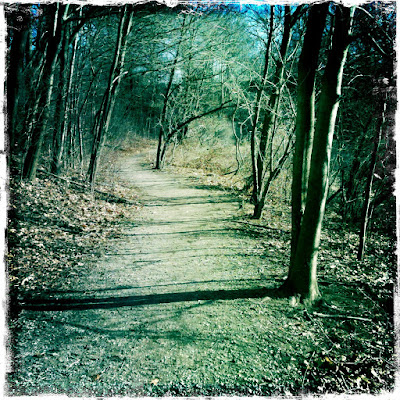 According to legend, Squant and Maushop had a troubled marriage. Maushop had a temper that matched his huge height, and once threw all their children into the ocean, where they were transformed into whales. Squant was understandably upset about this, and mourned the loss of her children. Her tears enraged Maushop even more, and he threw her from their home on Martha's Vineyard to Rhode Island, where she was transformed into Sakonnet Rock. Sakonnet Rock originally was shaped like a woman, but over time it's limbs fell off until it became unrecognizable. When Squant mourns for her children, the wind sighs and the surf moans.

Another story claims that Squant was once very beautiful, but her eyes were cut into square shapes by an enemy (possibly Cheepi, aka Hobbomock) who found her asleep on the beach. Squant hid her deformity by growing her beautiful black hair over her face. Her hair is now so long that she is said to resemble a huge haystack.

These myths show Squant as a passive victim of other deities, but that's not really the case. She is still quite active in the world, and isn't just petrified down on the Rhode Island shore.

Here's an example. In 1928, a group of schoolchildren and their teacher were walking along the beach near Mashpee. As they strolled, they saw what they thought was a haycart being pulled by oxen. But then they realized there weren't any oxen - the giant pile of hay was moving by itself! It was Squant. They all fled in fear. Mashpee children were instructed to never make fun of Squant or she would "tear you all to pieces." During the annual Cranberry Festival in the 20th century, "a child was given a basket of food to carry into the dunes to set down at a lonely spot as a gift to old Granny Squannit, and cautioned to hurry away without ever looking back."

Although somewhat terrifying, Squant also has a positive side and helps shamans. In the nineteenth century, Wampanoag herbalist William Perry was well-known across southern New England for his healing abilities. He credited them to Granny Squannit. If he needed to find a particularly rare herb, he would leave an offering of food under a pine tree and she would tell him the plant's location.

Granny Squannit has a similar reputation among the Mohegan, who say she rules the Makiawasug, the little people who dwell in the forest and under the hills. In one Mohegan tale, a medicine woman descends to an underground chamber to heal Granny Squannit from an illness. In thanks, the goddess gives the woman a basket of items to use in her healing practice.

So, in closing I'd say be respectful when you're walking on the beach or in the woods, because you never know if Squant is watching you.

I found most of this information in William Simmons' Spirit of the New England Tribes.