Have a Merry Christmas - and check your hay! 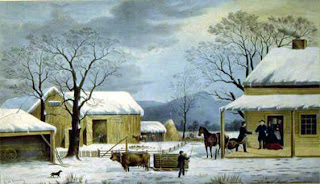 Currier and Ives image from Hay in Art. There's a site for everything!

Here's a tidbit of Christmas folklore from Clifton Johnson's What They Say in New England.

There's an old British saying that's also found in New England: "Half the wood and half the hay you should have on Candlemas Day." Candlemas is celebrated on February 1, which is halfway between Halloween and May Day. You're only half way through the fallow part of the year on February 1, so you better have enough supplies to get you through the rest of the winter. (Groundhog Day is celebrated at the same time as Candlemas, and expresses this same theme).

Clifton Johnson also found this variation of the saying among Massachusetts farmers in the 19th century:

Half the pork and half the hay
On Christmas Day

I think a 19th century farmer would want more than half his supplies left on Christmas, but what do I know? It's still a long way to go until spring.

Johnson goes on to say: "It is related that there was a time when the men would occupy a part of their leisure on Christmas Day in making a tour of the neighbors to see how their hay was holding out." It sounds like a very relaxed way to spend the holiday.

I hope you have a good Christmas and have enough supplies to get through the winter!

Half the wood, I'll need to check that out!
Merry Christmas!

Thanks for the post Peter! Winters are tough enough in our time, I cannot imagine how tough back in the day!