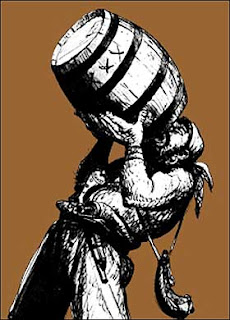 A traditional New England Christmas?
Although the Puritan hierarchy frowned upon Christmas, the lower classes still celebrated their holiday in the traditional Old English way - by getting really drunk.

Here are a few verses from 17th and 18th century almanacs that describe what happened in the month of December:

Strong-Beer Stout Syder and a good fire
Are things this season doth require.
Now some with feasts do crown the day,
Whilst others loose their coyn in play...

The Miser and the Sot
together they have got,
to drink a Pot.

By strong Liquor and Play
They turn night into day.

Some ask a Dram when first come in,
Others with Flip* or Bounce* begin;
Tho' some do only call for Beer,
And that i' th' morn is but mean chear.

(*Note - flip is an alcoholic drink with a raw egg mixed in it. Ecch! I don't know what bounce is - maybe a punch of some kind? This verse describes the robust drinking habits of sailors in December.)

All of these quotes are from Stephen Nissenbaum's The Battle for Christmas, which is a fantastic book. The past was much stranger than I was ever taught in school!

Looks like a bounce is a fruity concoction favored by Martha Washington:

Thanks Robin for the nomination! I'll be sure to post it and pay things forward, as you say.

Robert, you are wise in the ways of cocktails. Bounce sounds much better than flip. Interesting that bounce probably started in this part of the country, but is now associated mostly with the South.