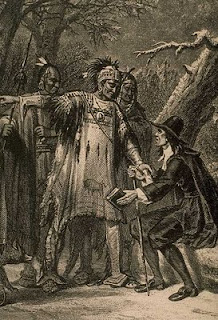 An illustration of Roger Williams and his neighbors. I don't think the Narragansett wore shirts with buffalo on them - there weren't any buffalo in Rhode Island!

About ten years ago I realized I knew quite a bit about European mythology and folklore, but not very much about the lore of New England, where I've lived all my life. It seemed like a big gap in my knowledge, so I started reading. And reading. And I'm still reading!

I was particularly curious about the religion of the Algonquians before the Europeans came. Unfortunately, they didn't leave written records, so we have to get our information from the English setters, who weren't sympathetic to native beliefs and sought to stamp them out. This is particularly true in Massachusetts, Rhode Island and Connecticut, which were more heavily colonized by the English than the northern New England states.

One exception was Roger Williams, the founder of Rhode Island, who was both sympathetic and curious about his neighbors, the Narragansett. His 1643 book A Key Into the Language of the Americas recorded not only their vocabulary, but some of their religious beliefs. Granted, Williams was still a devout Christian and seems a little squeamish about the native religion, but he was light years ahead of his peers in terms of being open-minded.

Williams wrote that the Narragansett worshipped 37 gods. Unfortunately, he only provides the names of 12, who are:

He also mentions Wetucks, "a man that wrought great miracles among them, and walking upon the waters, etc. with some kind of broken resemblance to the sonne of God." Wetucks may have been another name for Maushop, the culture-hero/giant of southern New England who is similar to the northern hero Glooskap. The modern Wampanoag still tell stories about Maushop, and his wife Granny Squant, who is probably Squauanit, the woman's god (or goddess) by another name.

It's great that there are still stories being told about Maushop and Squant, and I'm happy that Roger Williams recorded at least 13 names of the deities. But it would have been better if he had recorded all 37 names. Best of all would be if these gods were still being worshipped here in New England. It makes me realize how much has been lost, probably never to be recovered.

I don't want to end my post on a gloomy note, so I'll say thanks to everyone who has commented in the last few weeks. I really appreciate all the feedback and information!

Email ThisBlogThis!Share to TwitterShare to FacebookShare to Pinterest
Labels: A Key Into the Language of the Americas, Maushop, Narragansett, Roger Williams, Squant

Surely you can make an educated guess about the other 24 gods! There must be a god of hesitancy (Waitaminut) and a god of illusion (Magiquand), as well as a god of coffee drinks (Kabinit).

Peter, I study Narragansett theology. Would you be so kind as to provide a bibliography related to the information you mention in this article and Narragansett beliefs in general? Much appreciated!

Thanks for the comment. Roger Williams recorded some Narrangansett beliefs in his book A Key Into the Language of America. You can find the text a few places online. For a more contemporary writer who talks about Southern New England Indians in general you can try William Simmons' book Spirit of the the New England Tribes. He looks mostly at how Algonquian religious beliefs became transformed into folktales over time. I hope this helps!

Hello,
I am a member of the Mohegan nation, and I recently wrote my master's thesis on Moshup stories. The article will be available on ProQuest shortly. The title is "Moshup's Continuance: Sovereignty and the Literature of the Land in the Aquinnah Wampanoag Nation" it will probably help to clarify some of the things.

Rachel, could you let me know when your article is published? I'd love to know more.

Hello! I apologize for the delay. it is available on academia.edu. Enjoy!

just search for the title or my name

Great post Peter! It is wonderful learning more about the mythology of New England's original settlers.