Author Jeff Berlanger has an article on Boston.com about weird attractions in Massachusetts. He covers a mix of places historic (Dungeon Rock), paranormal (the Bridgewater Triangle), and kitschy (the birthplace of tupperware in Leominster). 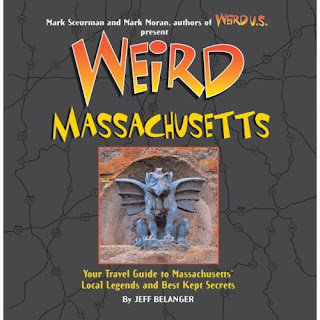 Berlanger is the author of the book Weird Massachusetts , which is brought to us by the same people who produced Weird New England. I own Weird New England - it's an entertaining and heavily illustrated coffee table book. Weird Massachusetts is the same type of book. It would make a good gift for a kid who's interested in these things, or someone who wants a quick overview of the bizarre things in the Bay State. Joseph Citro and Dianne Fould's Curious New England covers similar content, but is aimed at an older audience, is a small paperback, and includes explicit driving directions to the various locations.

It's interesting that all these books use words like "weird" or "curious" to describe things that in the past would have been part of everyday life. "Of course there are little monsters in the woods, sea monsters on the beach, and ghosts almost everywhere else", our ancestors would say. "What else would there be?" It would be weird for them if the world were otherwise. John Josselyn wouldn't be surprised by any of it!

It's not Berlanger, it's BELANGER!!