My family always eats the same meal every Thanksgiving, consisting of turkey, squash, potatoes, turnip, stuffing and cranberry sauce. Appetizers might vary, and Tony and I eat tofurkey, but the outline of the main meal remains the same. It's basically it's a lot of autumn vegetables boiled up and mashed. Delicious!

Thanksgiving has its roots in the old New England Puritan feast days, and it's surprising how closely my family's menu matches what people would have eaten three hundred years ago. I'm descended from relatively recent immigrants (I'm only second generation American on my father's side), but somehow this was the menu that my Quebecois grandmother learned to cook.
Dessert traditionally consists of the same three pies: squash, mincemeat, and apple. Again, these are the pies that my grandmother always made. Why squash instead of pumpkin? I have no idea. Thank God that the One Pie company still makes canned squash. When they stop we might need to abandon the squash pie for pumpkin.

This year I'll be helping out by baking the squash and mincemeat pie. My mother always makes her pie crust with flour, oil and water. It makes a very delicate crust, but is hard to roll out. I make my crust with shortening, flour, and butter. It is not quite so flakey and delicate, but it is easier for me to handle. Now, do you want to hear about a really tough pie crust? 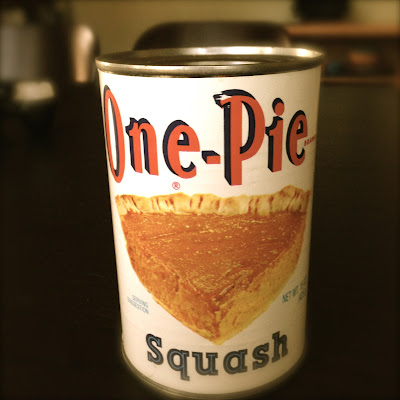 Pie is very, very old form of food. There are recipes for pie-like dishes from ancient Rome and Egypt. In Medieval England, pies usually contained a mix of sweet and savory ingredients. Mix together some fish, some fowl, some game, some vegetables and some fruit and voila! A pie. Although the ingredients have changed over time, the basic concept has remained the same: food baked inside a pastry crust.

The pie crusts of old were generally not the tender, flaky delights that we experience today. Whether it's butter, oil or shortening, fat is inexpensive to buy these days. In the past that was not the case, and many people made their pie crusts just from flour and water with no fat added. Fat adds tenderness to the pastry, so these fat-free crusts were quite tough.
You may think I exaggerate the toughness, but it was noted by several authors. In the 1500s this type of dough was called "strong dough." The English cookbook author Hannah Glasse included the following instructions in 1747's The Art of Cookery: "First make a good standing crust, let the Wall and Bottom be very thick..." If I'm not misinterpreting her, it sounds like the crust can stand up on it's own like Play-Doh. Yikes!
The Swedish minister Israel Acrelius lived in Delaware during the middle of the 18th century, and experienced some tough pie crusts firsthand. He wrote in 1759 that the crust "of a house pie, in country places ... is not broken even if a wagon wheel goes over it." Acrelius was probably exaggerating a little, but you get the picture.

The pie crusts in Colonial New England were as tough as those in Delaware, if not tougher. Rye grows better in our climate than wheat, so rye flour was the most commonly used flour here. Have you ever baked with rye flour? It is much, much harder than wheat flour, so imagine making a fat-free rye flour pie crust. It was probably like edible ceramic.

A sturdy rye pie crust appears in Harriet Beecher Stowe's novel Oldtown Folks (1869), which is set in late 1700s Massachusetts. Two abandoned children find shelter for the night at the home of a friendly farmer. In the morning he sends them on their way with kindly words, and a pie:

The crust was so hard that it could be carried without a pan. Now that's a strong crust.

The hard crust does explain one thing that has always puzzled me. Housewives in pre-Industrial New England made dozens and dozens of pies in the weeks leading up Thanksgiving, and a cook prided herself on the number and variety of pies she could produce. Although some of these pies were eaten at Thanksgiving, the majority were stored in the root cellar for the winter. I always wondered if people had dozens and dozens of pie pans in their houses, but apparently they didn't. They probably just turned the pie out of its baking pan and stuck it on the shelf. The crust was so hard it would hold its shape for months. I wonder how the flavor held up?

So Warner is writing about a pie so solid and so dry that someone could stuff it in their shirt without it leaking. Wow!
Traditional New England menus are great, but let's praise innovation where we can. I don't think anyone wants to go back to eating rock solid pie crust, no matter how portable it is.

*****
If you want to learn more about traditional New England pies, I recommend James Baker's Thanksgiving: The Biography of An American Holiday and Keith Stavely and Kathleen Fitzgerald's America's Founding Food: The Story of New England Cooking. I got most of my information from those two books, which are great! This post is an updated version of one I wrote on this topic way back in 2015.

You can see how they did the same "disposable" crusts to cook a variety of fillings/dishes in Early Modern England. Saves on washing dishes! https://youtu.be/Ps0h8qX0MUU?t=1211

As always another great story, both of you have a wonderful Tofooky Day ❤❤

Very interesting, Peter. Thank Heavens for the pie crusts we have nowadays.

I don't make many pies anymore; favoring pumpkin custard rather than pumpkin pie. One exception where pie crust is an absolute must: when making My Mom's calazone.

Ma's crust was always the No-Fail Pie Crust which uses white vinegar as a tenderizer.

Hope Tony and you have a Happy Thanksgiving.

Canned "pumpkin" is actually legally allowed to contain a variety of winter squash (and is often ONLY squash), so your squash pie would fare just fine even if that brand is discontinued.