Imagine yourself as a Puritan colonist, living in New England during the 1600s.

Things aren't going all that great. Your cow keeps acting strangely, sitting down when you want her to move and running away when you want her to stay put. That Indian pudding you made for dinner the other day came out blood red rather than the traditional muddy brown color. You had to throw it away. Your spouse made cheese but it got infected with maggots, and one of your children has a weird illness that won't go away. And to top it all off, your maid servant can't sleep at night and swears something comes invisibly into the house to pinch her.

Clearly, a witch is causing all your problems. Luckily, like all New England Puritans, you live in a small tightly-knit community bound together by mutual obligation and gossip, and there are a few cranky folks that everyone hates who are obviously witches.

You tell the town magistrates that they need to do something about these witches. They happily arrest the cranky suspects (whom no one likes anyway), but during the trial the magistrates want proof that they are witches.

You testify about the cow, the Indian pudding, the maggoty cheese, and your sick child. "Well sure," the magistrates say, "but maybe there are natural explanations for all those. Got anything else?'

The maid servant testifies about the thing that attacks her in the night when she sleeps. Some other neighbors jump in to testify that they've seen strange beasts lurking in the dark woods, or had something sit on their chests in the middle of the night. Spooky!

"Yes, it sounds like witchcraft," the magistrates say, "but how do we know if was really Goody Smith and Goody Jones doing all this? Of course no one likes them, but that doesn't mean they're witches."

The magistrates confer and decide to examine the women for witches teats, which are strange bodily growths witches use to suckle their demonic familiars. They do find some strange growths, but aren't sure if they are really any stranger than the pimples and warts non-witches have on their bodies.

One thing the magistrates would not do, however, was throw them in a pond to see if they could float. That never happened in New England. 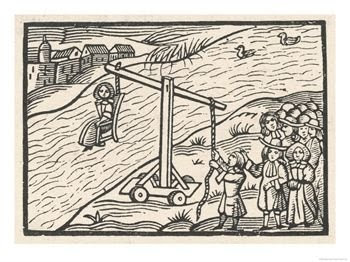 Well, almost never. It did happen at least once, in the year 1692. While a giant witch hunt raged through Massachusetts that year, a smaller one was occurring in Connecticut. It centered around two women, Elizabeth Clawson and Mercy Disborough, who were accused of bewitching a servant girl named Katherine Branch.

Unlike their Puritan brethren to the north, the Connecticut magistrates took a more cautious approach to witch-hunting. Deputy Governor William Jones even wrote a document explaining what type of evidence would be considered sufficient, and which would be insufficient, during the trial. He considered the following methods for proving someone is a witch:

Less sufficient are those used in former ages such as by red-hot iron and scalding water, the party to put his hand in one or take up the other. If not hurt the party cleared, if hurt convicted for a witch. But this way utterly condemned in some countries. Another proof justified by some of the learned is by casting casting the party bound into water. If she sinks counted innocent, if she sink not then guilty (quoted in Richard Godbeer's Escaping Salem (2005))


The magistrates agreed that the first two tests weren't good - and for obvious reasons. Everyone burns their hands touching hot metal or boiling water, regardless of their guilt or innocence. But they didn't rule out the water test. Also known as "ducking," the test operates on the principal that since water is used in Christian baptism it will reject anyone that is allied with Satan. If the accused person floated, that meant the water rejected her because she was a witch. If she sank, she was innocent. Of course, being innocent also meant possibly drowning, but it was better than being guilty of witchcraft, right?

Both accused witches agreed to be ducked, and on September 15 both were thrown into a pond.

...two eyewitnesses of the sorry exhibition of cruelty and delusion made oath that they saw Mercy and Elizabeth bound hand and foot and put into the water, and that they swam upon the water like a cork, and when one labored to press them into the water they buoyed up like cork (from John Taylor's 1908 book The Witchcraft Delusion in Connecticut, 1647 - 1697)


So based on the results of the water test, Clawson and Disborough should have been found guilty of witchcraft. But they weren't. Jones had noted that "some of the learned" thought ducking was sufficient evidence, but some others didn't. Increase Mather, the president of Harvard and one of New England's leading Puritan ministers, was one of those who didn't.

Mather attacked the reasoning behind the water test in An Essay for the Recording of Illustrious Providences (1684). Not all water is sacred, he argued, only the water actually used in a baptism. Besides, the Bible didn't state that God approved of ducking witches, so it seemed likely the water test had actually been created by Satan to cause confusion. The water test was itself actually a form of witchcraft.

The magistrates threw out the water test as evidence, and after lengthy trials both Clawson and Disborough were found innocent. They were freed partly because the magistrates didn't see any good evidence, but also because many people thought Katherine Branch, the afflicted servant, was simply making everything up. Still, it's interesting to see how Puritans grappled with the difficult task of proving witchcraft.


*****
Most of the information for this week's post come from Richard Godbeer's brief but informative book Escaping Salem: The Other Witch Hunt of 1692.

Btw, this happened in Stamford, CT.