This past weekend I was talking at a party to someone who lives in Provincetown. At some point in the conversation I mentioned that I write about local folklore. Eventually our conversation turned to the Truro Panther.

"I think I saw it once," he said. "It was late at night, and I was driving down Route Six past Pilgrim Lake into town."

That stretch of the road is really dark, I remarked. He agreed.

"I saw an animal run across the road in front of my car. I just caught a glimpse of it, almost like a shadow. Whatever it was, it had a long curving tail."

I asked him if maybe it had just been a coyote.

"No, definitely not. It had a long tail, just like a cat."

Had my friend seen the elusive Truro Panther? Maybe he had.

The Truro Panther is also known as the Pamet Panther and the Beast of Truro. If you've never been to the town of Truro on Cape Cod, you might not understand why people think a panther might be living there.

Located on the outer Cape, Truro is very busy on summer days. Route Six is filled with cars passing through to Provincetown, and Truro's beaches are bustling with families of tourists. But the summer hustle and bustle is deceptive. There isn't really much of a town center in Truro, and most of the houses are surrounded by a dense scrubby forest of wind-stunted pines and oaks. Much of the town's land is part of the Cape Cod National Seashore and can't be developed. There are deer and coyotes in the woods, and seals and sharks swim offshore.

Last year in August we saw a school of bluefish feeding on a school of minnows in the shallows off Longnook Beach. Then a group of seals arrived and began to feed on the bluefish. There were big pools of blood in the water. Needless to say, I didn't go swimming. Truro can feel like the edge of the world, particularly to a city person like me. 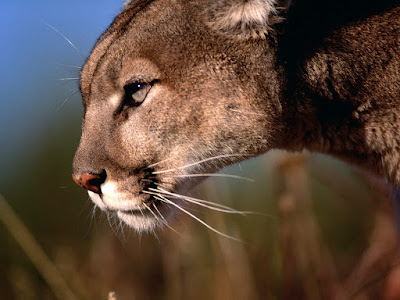 In the mid-19th century people in Truro reported seeing a strange creature lurking around their farms and in the woods. They couldn't quite identify it. Was it a wolf? Was it some type of big cat? Apparently some locals thought it might have been a lioness that escaped from a ship en route from Africa. Whatever the creature was, people called it the the Truro Hyena because of the eerie sounds it made at night. Livestock went missing. Paw-prints were seen in the sand. Women and children refused to leave their homes after dark.

Eventually a hunting party was formed. Boys and men armed with guns searched through the woods and along the beaches, and although they found paw-prints they never captured the animal. The whole incident was parodied by Thomas Stone, a physician who lived in nearby Wellfleet, in a poem called The Hyena Hunt:

Some vow it is a lioness, bore
By ships from Afric's sunny shore,
That paces now our Cape sands o'er;
Moaning for whelps, most piteously.

Some still, a hyena, whose fearful howl,
Had shook the woods of Tonegal,
In company with the fierce jackal,
Fighting the Fellah, hideously.

Some unbelievers, with taunting sneer,
Swore 'twas a goat, a dog, a deer,
Whose footsteps, magnified by fear,
Had seized the fearful hearted.

But there those fearful footsteps stand,
Imbedded on Atlantic's strand,
And the moaning cry runs through the land,
As if from loved ones parted.

It was easy for Stone to characterize those 19th century Truro citizens as yokels. After all, even back then people knew there were no giant cats living on Cape Cod.

Well, no one told the giant cat, because in 1981 it reappeared. The first signs appeared in September, when about a dozen house cats were found dead across town. Police believed the cats were probably the victims of feral dogs.

Later that fall, William and Marcia Medeiros of Truro were walking on a path through the woods near Head of the Meadow Beach when they saw a large cat-like animal. It was broad daylight, and they watched the animal for about five minutes before it disappeared into the woods. They said the animal had a long curving tail and probably weighed about 80 pounds.

On December 16, Truro police officer David Costa returned home from duck hunting when he noticed that one of his pigs had been attacked.

"He was just barely alive. The claw marks were long and almost looked like someone did it with a razor blade. The marks were horizontal," he said, not up and down the pig's body, an indication that the attacking animal had jumped on the hog's back. (The Boston Globe, January 4 1982, "Is A Mountain Lion Loose on Cape Dunes?", p.13)


Costa's pig was so grievously wounded it had to be slaughtered. On December 20, two other pigs in South Truro were also attacked, but their wounds were much less serious.

Animal tracks were found near the South Truro pig pen, and state wildllife officials thought a single dog had carried out the attack. However, the soil was too sandy to tell for sure what had made the tracks. Dogs tend to hunt in packs, so would just one dog attack two pigs?

A woman living in North Truro was awakened in the middle of the night by an animal shrieking loudly outside her home. When she and her husband investigated the next day they found animal tracks around their yard. Again, the soil was too sandy to determine with certainty what made them. Later, a tourist visiting from New York called town selectman Edward Oswalt to report seeing a large cat-like animal in North Truro.

Various theories were proposed. The official one was that the attacks had been carried out by wild dogs, but many people thought the creature was a mountain lion. This could be possible (there is enough open space and game in Truro), but it's unclear how a mountain lion would make it all the way to the Outer Cape. The animal would need to either swim across the Cape Cod canal or walk over all bridge, and then make its way down to Truro. It doesn't seem plausible. And besides, Massachusetts wildlife officials believe that mountain lions are extinct in the state.

Other locals thought that perhaps a camper had set loose a pet mountain lion, and a rumor spread that  someone had been seen in Provincetown walking a panther on a leash. Maybe that panther had escaped?


In the end there was no clear resolution. The sightings and livestock killings stopped, and the creature became part of Truro folklore. Is something still lurking out there in the scrubby forests of the Outer Cape? My fried saw something strange crossing the road, so maybe there is.