Sometimes when I read some weird old text or strange witchcraft narrative, I think, "Did the world operate by different rules in the past? This doesn't sound like the one I live in."

I first read about the concept of the past having different rules in John Crowley's book The Solitudes, the first in his fantasy fiction quartet Aegypt. The Solitudes tells how an unemployed historian named Pierce Moffet becomes stranded the small town of Blackbury Jambs. Moffet is hired by a wealthy resident to write a biography of a local writer of historical fiction. But as Pierce researches the writer's life, he begins to question whether the laws of physics and reality have been stable across time. Perhaps, he thinks, there was a time when magic really did work and the world was stranger than it is now.

The book that most recently brought this idea to my mind is non-fiction: John Josselyn's An Account of Two Voyages to New England (1674). Not much is known about Josselyn, an Englishman who traveled to New England in 1638 and 1663. His life story is unknown, but in addition to An Account, he also wrote New-England's Rarities Discovered (1672). Both books contain extensive lists of New England flora and fauna, and historians speculate that Josselyn may have been trained as a surgeon. But although he was interested in science, sometimes the New England he describes just doesn't sound like the one we live in.

For example, he describes a deer-like animal called a maccarib, which has two horns "growing backwards along their backs to their rumps" with "another horn in the middle of their forehead, about half a yard long, very straight but wreathed like a unicorn's horn..." I don't think there are any three-horned deer in North America, or ever were. He also tells how the local Indians would pick up a live rattlesnake with one hand, strip off the flesh with their teeth, and eat the snake whole. It sounds unbelievable, but then again he also claims the Indians spoke in rhymed verse and that his English neighbors in Maine encountered angry mermen, ghosts, and a ship crewed by female witches. 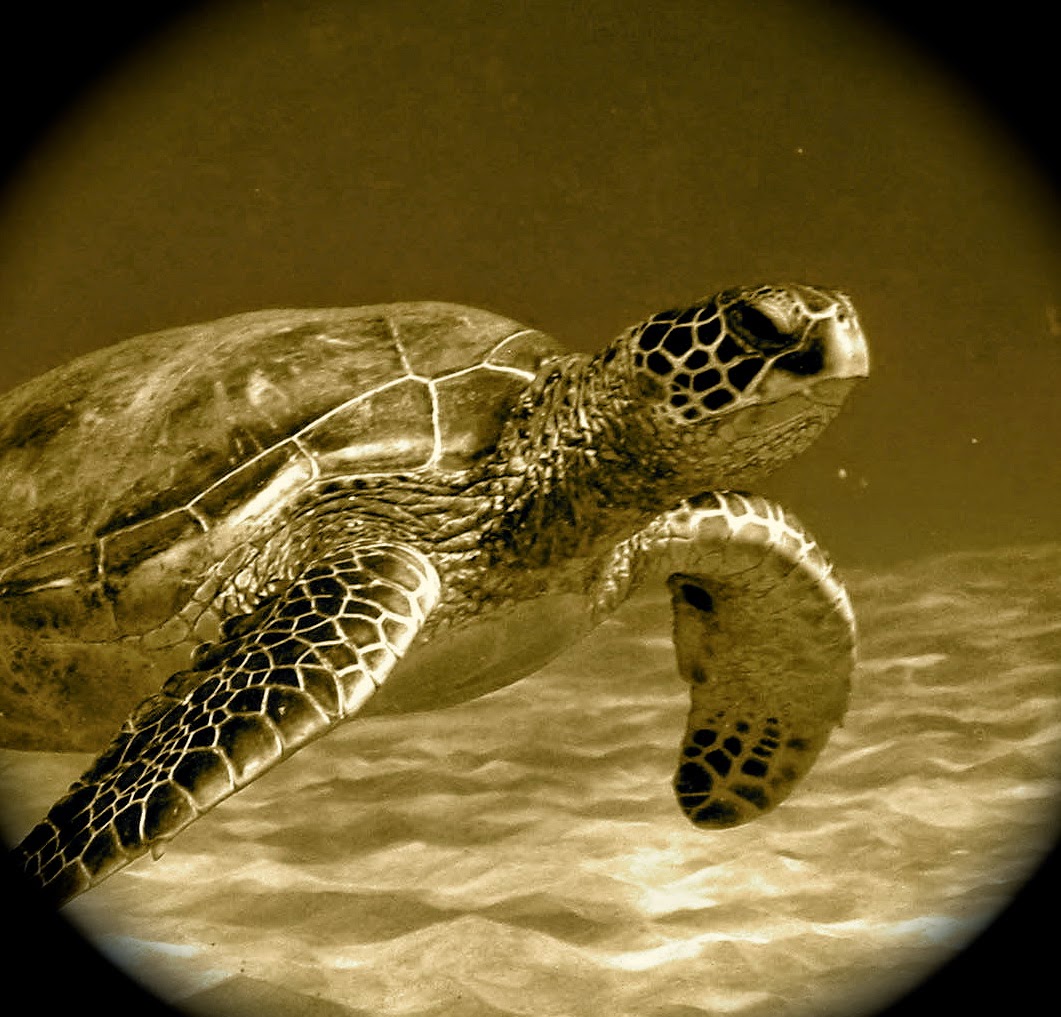 Josselyn makes our region sound like Narnia or Wonderland, and the ocean was just as strange as the land. Here's something Josselyn experienced on his trip across the Atlantic from England:

July the Sixth: Calm now for two or three days, our men went out to swim, some hoisted the shallop (a small boat) out and took diverse Turtles, there being an infinite number of them all over the Sea as far as we could ken, and a man may ken at sea in a clear air 20 miles. They floated upon the top of the water being asleep, and driving gently upon them with the Shallop, of a sudden they took hold of their hinder legs and lifted them into the boat... When they were brought aboard they sobbed and wept exceedingly, continuing to do so till the next day that we killed them, by chopping off their heads.


I do believe that animals feel emotions and fear, but I don't think that turtles can shed tears and sob. Maybe sometimes their eyes might get runny, but that's not what Josselyn is describing. He's describing a boat full of sad turtles crying because they know their going to be eaten. I'm reminded of the talking animals that fill fairy tales and children's books.

I don't find myself believing all Josselyn's tales, but they are still compelling. Did the world really operate by different rules in the 1600s? Maybe, but maybe he's just describing how the world should be, or how the world feels. After all, I'm sure turtles don't want to be eaten, and would probably cry if they could. I doubt there were any maccaribs wandering around, but it probably felt like there could be to an Englishman standing on the coast of a vast new continent.

Other stories are expressions of ancient metaphysical theories about the human soul, like the following:


Near upon twenty years since there lived an old planter at Black-point (now Scarborough, Maine), who on a sunshine day about one of the clock lying upon a green bank not far from his house, charged his son, a lad of 12 years of age, to awaken him when he had slept two hours. The old man falls asleep and lying upon his back gaped with his mouth wide enough for a hawk to shit into it. After a little while the lad sitting by spied a humble-bee (i.e. bumblebee) creeping out of his father's mouth, which taking wing flew quite out of sight. The hour as the lad guessed being come to awaken his father, he jogg'd him and called aloud "Father, Father, it is two o'clock!" but all would not rouse him. At last he sees the humble-bee returning, who lighted upon the sleeper's lip and walked down, as the lad conceived into his belly, and presently he awaked.


After describing this Josselyn goes on to talk about how bad the mosquitoes are in Maine, as if the bee story were just an everyday occurrence like mosquitoes. But the bee story is really interesting, and not just because the sleeping farmer's mouth is open wide enough for a "hawk to shit into it."

As  Horace Beck points out in his book The Folklore of Maine (1957), the bee story is actually quite old and was well known in the Middle Ages. It was believed that the human soul could leave the body while a person was asleep, usually in the shape of an animal. In most stories mice or snakes emerge from the sleeper's mouth, but a German story tells how a bee flew from a king's mouth while he was asleep. The king's guard followed the bee as it flew to the king's secret treasure trove. The guard killed the bee, the king died, and the guard became a rich man. Happily, nothing so dramatic happened to the Maine farmer.

Beck claims this tale had disappeared from Europe by the seventeenth century, so it's interesting it shows up in Josselyn's book. Old beliefs about the human soul are behind a lot of New England witchcraft stories, and the bee soul appears again in a story from the late 1800s about a Cape Cod witch. For John Josselyn, New England was a land of wonders where an old farmer's soul could fly free during a sunny afternoon's nap. For the Puritans and their descendants, these wonders were exiled to the dark realm of witchcraft. The rules that ruled their world were different.

We still live in a world dominated by a Puritan worldview about the supernatural, not John Josselyn's. Our supernatural world is dark, not sunny. New England is ghost-haunted, witch-haunted, Devil-haunted, monster-haunted, etc. Name something spooky and we have it! We can't change history, and our region's eerie history is part of its charm. Most people, myself included, have affection for New England's residents of the dark.

And on that note: Happy New Year! Here's hoping 2015 is full of wonders for you, and only as much spookiness as you want. And if you do fall asleep in a field, don't open your mouth too wide.

"Maccarib" a moose, since their antlers do sort of point forward and backward? A moose being something an Englishman at that time would likely never have encountered. Turtles "crying" could be saltwater turtles naturally exuding moisture from their eyes after being hauled aboard a ship? The rest, perhaps a combination of superstition, Native American folklore, and storyteller's B.S.? John Josselyn's enchanting tales do have an otherworldy feel about them, then again, he was visiting a world quite different from his own.

Thanks for the comment. You do raise a good point. How much of Josselyn's book is just misinterpretation of unfamiliar phenomena, or maybe even open misrepresentation for better book sales? I don't think we can know, unfortunately. What's interesting to me is how science, religion and magic all blur together in his book. I don't think those three things had yet become separate cognitive domains like they are now.