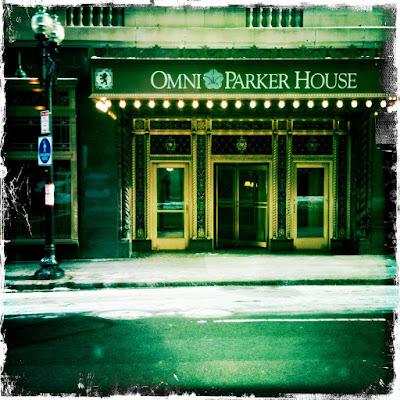 wow...guess i'll have to walk up the street for a pilgrimage to see where ho chi minh worked!

Dave - I don't know about lobster thermidor, but the Parker Roll is a definite. Apparently the hotel kept the recipe a secret until 1933 when Franklin Roosevelt requested the recipe for the White House.

That Ho Chi Minh worked at the Parker House is a great story that Americans need to think about. We attract people from all over the world who learn about our country. Hopefully, we teach them the good, not the ugly about America, because no telling what they will use their knowledge for. Ho Chi Minh whipped America's butt because He Knew Us; and we had no clue about him or his country.

Dave, Lobster Thermodor was not created at the Omni Parker House. It's roots trace back to the infamous Wayside Inn.

One other note about Ho Chi Minh and his Boston connection. There used to be 2 Natural Gas tanks on the I-93 Expressway (there is only one now). The smaller of the two originally had the rainbow stripes painted on it. Many people believe the painter of the original tank with the stripes was sympathetic to the Vietnamese cause and painted the profile of Ho Chi Minh into one of the stripes (blue I believe).

When they no longer needed 2 tanks, they kept the larger of the two. The one that did not have the stripes was the larger. They recreated the stripes, but I believe they elected to intentionally NOT reimpose HCM's profile into the blue stripe.

Thanks for the comment, JimmyD! I never knew that about the gas tank.

I search google and your blog popped up with the Ho Chi Minh and Malcolm X working at the same Hotel ,which by the way The Boston Cream pie originated .Great web site , go Blogger.. http://www.theurbanpontifficater.blogspot.com/

Thanks for the blog! Although it had information that I already had, I still reference it on my blog that is still in progress. We bloggers must stick together! 😉

BlueHost is one of the best web-hosting provider for any hosting plans you need.

Another note about Ho Chi Minh was his appearance in Paris at the time during the discussions and debate about the Treaty of Versailles in 1918. Hi Chi Minh wanted to gain attention to the plight of the people of French Indochina. He was largely ignored.

Thanks Unknown! Ho Chi Minh really got around. It's amazing that such an important historical figure worked at a Boston hotel - and he was not the only one!