Labor Day. The end of summer.

We could have gone to the beach.

Instead we went looking for... the Eighth Gate to Hell!

We didn't find it. Or at least I don't think we did.


The eighth gate to Hell is supposed to be located somewhere in Friends Cemetery in Leceister, Massachusetts, a rural town just outside Worcester. It seems odd that a Quaker burying ground would host a portal to perdition, but that's only one of the strange things about this cemetery.

While the graveyard's formal name is Friends Cemetery, it's probably better known by its nickname, Spider Gates Cemetery. It got that nickname because of these distinctive iron gates: 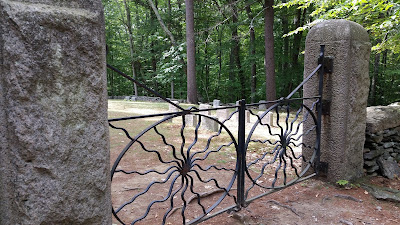 They do sort of look like abstract spiders, don't they? Maybe? From what I've read the gates are actually supposed to be images of the sun, with its happy connotations of life and rebirth. They don't really look like the sun to me, but then again they also have too many legs to really be spiders either.

Weird structures in cemeteries often give rise to weird legends. A strange-looking statue? It must be murderous. An inscription that seems out of place? It must be a warning about a curse. A strange slab? It's there to keep a witch down. Usually the weird structure has just one weird story attached to it. But at Spider Gates, there are many, many strange stories.

For example, it is said that the eighth gate to Hell is located somewhere in this cemetery. Or perhaps if you pass through seven gates at the cemetery the eighth one will lead you into Hell. It's little unclear, as good legends often are. I didn't even know there were eight gates into Hell, so it's always good to learn new things. There are only two formal iron gates (one large and one small) at the cemetery, but there are smaller openings in the stone walls throughout the woods. Maybe they all add up to eight? 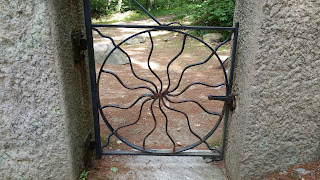 The iron gates clearly gave rise to the gateway to Hell legend, but where did these ten other legends came from?

1. There is an oak tree with a rope hanging from it known as the Hanging Tree. Someone committed suicide here and their ghost still haunts the cemetery.

2. A demonic creature has been heard roaring in the woods.

3. Near the cemetery is a cave where a young woman was murdered many years ago.

4. Across from the main cemetery is a secret second cemetery that can only be seen once.

6. A haunted house is located nearby. Don't go inside!

7. Outside the walls of the cemetery are many small stones with strange runes inscribed on them.

8. The nearby river is actually the River Styx, which leads to the underworld.

10. Satanists have permission to conduct their rituals in part of the cemetery called the Altar.

Those are all pretty cools stories, and I think there are more out there. Happily, Tony and I didn't encounter any strange phenomena, and the cemetery actually has a pretty innocuous history. It was established in the 1700s by a group of Leceister Quakers. In the mid-1800s they merged with the more numerous Worcester Quakers, who still maintain the cemetery today. The gates were built in 1895, and have been replaced at least once after being stolen. I think that's the most shocking thing that's ever been documented that happened at Spider Gates.

So are any of those legends true? I don't know, but there is at least a kernel of truth behind the Satanist legend. And here's why.

Last week I told a friend that I was going to visit Spider Gates. He said, "I love Spider Gates! I used to go there when I was in college." This friend attended a college near Leceister, and when he was a junior he was initiated into a secret society for seniors. The initiation happens like the this.

First, the senior members decide who they want to initiate from the junior class. Then the seniors don black hooded robes, find the juniors they want on campus, and wordlessly tap them on the shoulder. That tap is the invitation to join the secret society.

Next, to become full-fledged members the juniors go through an initiation process that involves locating the grave sites of the college's founders. This doesn't sound too hard, except that they need to do it at night, in the middle of winter, and under the watchful gaze of the seniors, who silently stand by wearing their hooded robes.

As a junior, my friend had been to Spider Gates at night to find a college founder's grave. When he became a senior, he wore a hooded robe and watched the juniors do the same thing.

"The police totally left us alone," he said. "They knew it was just a bunch of dorky college kids and that we weren't causing any trouble."

Hmmm. Do you see how this initiation could have given rise to the Satanist legend? Someone may have seen the students in their black robes walking towards the cemetery, or maybe even in the cemetery itself. When they reported this to the police they might have been told, "Don't worry, they have permission to go there at night." Over time, a harmless college initiation could become misinterpreted as a dark Satanic ritual. 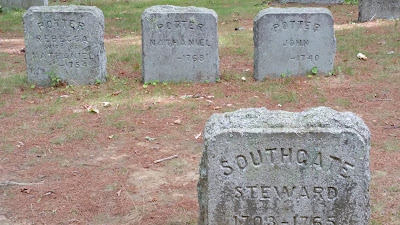 In reality, practicing adult Satanists are harmless as well and don't go around breaking the law. Think of the Martin Starr character on Silcon Valley, for example! However, the people who might sometimes break the law are teenagers experimenting with the occult or just partying in the cemetery. We did find the remains of a fire in the middle of the cemetery, right on the raised area called the Altar. Lighting fires in cemeteries is disrespectful and illegal, so don't do it! No one is supposed to be in the cemetery at night - not even college kids wearing robes. 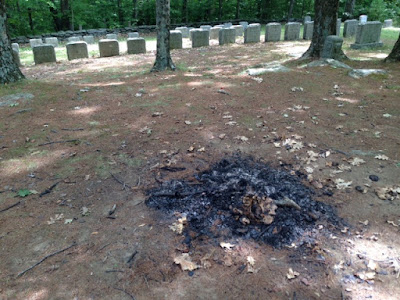 I assume the fire was lit by teenagers, but who knows? Legends can give rise to imitators, so maybe someone really is out there at Spider Gates conducting abominable rites. It's easy for me to be a rational skeptic here in my well-lit study, but if you put me out in the woods late at night I might become a true believer.


There is a lot of information about Spider Gates out there, but I got most of mine from Joseph Citro's Weird Massachusetts, Daniel Boudillion's excellent page on the topic, and this fun little site as well.  Special kudos to Tony for taking some great photos on our expedition!