We're blessed in this part of the country with an abundance of natural features named after Satan.

Clearly our Puritan ancestors were obsessed with the Evil One and held him accountable for almost every unusual rock, cave, or crevice. In some cases these natural features were also associated historically with the local Algonquians, whom the Puritans erroneously felt were Satan's minions.

That's the situation with the Devil's Den in Ashland, Massachusetts, a small cave where archeologists have found some evidence of early Indian activity. Tony and I decided to pay a visit while we were in Ashland looking for the witch caves. Why not see two interesting sites on one tank of gas? 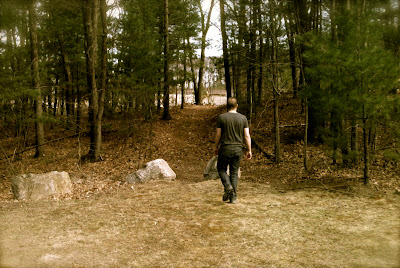 We parked our car in Wildwood Cemetery and followed a trail that a local guidebook said would lead to the Devil's Den, but unfortunately we couldn't get there. This giant construction site blocked our access, and the trail had been removed. We actually could see the cave far on the other side of the construction site but had no way to get to it. 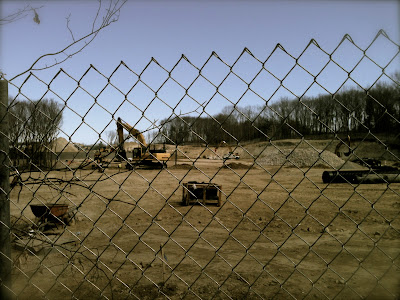 It turns out that Ashland is creating new athletic fields behind their high school and the Devil's Den has been at the center of some controversy. Some people in the town claim it has to be destroyed for the new soccer fields but the local historical society has been petitioning to save the cave.

Seriously? You're going to destroy a cave that is thousands of years old, named after Satan, and associated with ancient Indian groups so you can expand your athletic fields? It just seems like a decision everyone will regret in a couple years once the high school population starts to shrink again. I think it's important to preserve the things that make this part of the country interesting and unique. And besides, if I were a high school student I would rather have a cave called the Devil's Den than a soccer field, wouldn't you?

It seems the historical society has prevailed and the Devil's Den has been spared, although it has been damaged. I suppose the important thing is that the cave has been preserved, but if the Ashland soccer team has a bad losing streak we'll know who to blame. Satan!

Don't forget the numerous Tophet swamps in your list of infernal place names. Dan Boudillion has some fascinating material on his site if you are interested. I've partially explored the one in Lexington.

I think I could make a good case that the Algonkian powwows were minions of Hobbamock, who corresponds pretty closely to the Judeo-Christian Satan. But of course there were more benevolent Indian deities as well.

Thanks for that piece of information, which I didn't know. I have seen Dan Boudillion's site and it is a really great resource!

A lot of historians have made the claim that local powwows/shamen had close relationships with Hobbamock, so you're not alone in that. Certainly the Puritans did associate Hobbamock with Satatn, and the two names are used interchangeably in some witch trials. The Alonquians didn't have a dualistic, good vs. evil religious world view, though, so I don't think Hobboamock filled quite the same role in their theology as Satan did in the Puritans'. But maybe some of the Devil place names in New England do get their name because they were associated with Hobbamock? The powwows certainly did go to swamps to contact him.

I really like this website , and hope you will write more ,thanks a lot for your information.

Its amazing, looking at the time and effort you put into your blog and detailed information you provide. I'll bookmark your blog and visit it weekly for your new posts.

Really your post is really very good and I appreciate it. It’s hard to sort the good from the bad sometimes, but I think you’ve nailed it. You write very well which is amazing. I really impressed by your post.

Yeah..This the matter which I am finding & now I caught! This is really exciting. Grand Theft Auto IV | Download Sonic 3 | Download Lord Of The Rings War In The North | Download Ridge Racer Unbounded | Download Rise Of Nations

Thank you for another great article. Where else could anyone get that kind of information in such a perfect way of writing? I have a presentation next week, and I am on the look for such information.

Thanks for sharing your website.This blogs are very informative. I really say thanks to you.

Hi, nice post. I have been wondering about this topic,so thanks for sharing. I will certainly be subscribing to your blog.

I have found this article very exciting. Do you have any others on this topic? I am also sending it to my friend to enjoy your writing style. Thanks
Online Shopping in Pakistan

"but if the Ashland soccer team has a bad losing streak we'll know who to blame."

I beg your pardon, but it should be, " we'll all know WHOM to blame."

Other than that, I enjoy your blog posts very much! I am disabled and can't travel like you ( I certainly can't hike through the woods), so I truly enjoy adventuring vicariously through you. I wish you many more safe and exciting adventures! :D

Thanks for reading, Hikergirl, and thanks for the good wishes!

Thanks for taking the time to discuss this, I feel strongly about information and love learning more on this. If possible,it was extremely helpful for me.

Really well created work you have post here Thanks a lot for sharing,

I have feel that this blog is really have all those quality that qualify a blog to be a one.

This is really exciting.This is the matter which I am finding & now I caught! Cool stuff
Biker Jacket | Biker Suit