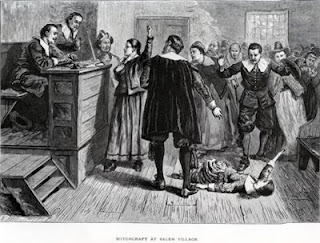 Gentlemen, have you recently woken up from a long night's sleep to find yourself more exhausted than when you went to bed? Did you have vaguely sexual but unpleasant dreams? Have you recently angered a neighbor woman with an unsavory reputation?
If you answered yes to those three questions, it's likely you were the victim of a witch bridle.

Witch bridles have a long history in New England folklore. During the Salem witch trials of 1692, afflicted servant girl Mary Warren claimed Martha Emerson of Haverhill used a witch bridle. According to Mary, Martha's spectre told her she had "rid a man with an inchanted bridle." Under pressure, Martha confessed that she had indeed magically ridden her neighbor Matthew Herriman. Matthew verified this, claiming he had awoken one summer morning feeling unwell and as if he had been holding a bridle in his mouth all night.

Herbert Sylvester tells another, more detailed story in Maine Pioneer Settlements: Old York. Skipper Perkins, a fishing boat captain, refuses to give his impoverished Kittery neighbor Betty Booker any halibut for free. Snidely, he says to her "Show me your sixpence, ma'am!" Bad decision - Betty's poor, but she's a witch. She curses his boat, and he's unable to bring in any good catch.

But that's not the limit of her revenge. On a dark stormy night, Betty and some of her witchy colleagues invade Skipper Perkins' home, screaming "Bring me a bit o' hal'but, skipper!" They strip Perkins naked, strap a bridle on him, and all ride him up and down the Maine coast until sunrise. As they depart, Betty says "Don't say sixpence, skipper, to a poor old woman again." It took Perkins three weeks to recover.

Years later, an old house was being torn down in Kittery. Inside one of the walls, the demolition crew found a bridle made from a horse tail, tow rope, and yellow birch bark. They burned it.

The October 10, 1896 issue of the Boston Evening Transcript contains an article titled "Witchcraft Today: The Belief in Supernatural Feats in a New England Town." According to the reporter, an unnamed coastal town near Boston was dominated by three witches, who each had their own bridle. They were made of the same materials as Betty Booker's, were about nine feet long, and could be thrown like lassos. A local fisherman named Captain Isaac somehow insulted Hetty Moye, one of the three sorceresses. Hetty invades his bedroom one night seeking revenge, armed with her bridle, but Isaac avoids becoming her steed by ducking under the covers as she tries to throw it over his head. He forced her from his home and was apparently never bothered again.

Here's one more case of a witch bridle. According to a the February 6, 1919 issue of the Boston Herald, a Cape Cod man was cursed by a local elderly witch after he stole some of her doughnuts. She devised a magic bridle, and rode him in his dreams like a horse until he was exhausted. Historian George Lyman Kittredge claims he heard a similar story himself from a Truro native in 1888.

I'm not sure of the witch bridle's origin, but the belief seems related to beliefs in succubi and night hags. There's a lot of sexual innuendo going on as well, and some fear of women!

Sources: Botkin's Treasury of New England Folklore, the Dublin Seminar's Wonders of the Invisible World, and Kittredge's Witchcraft in Old and New England. And of course, the Web!