Bewitched Dogs Killed in Salem and Other Strange Animal Stories

There are lots of weird little stories buried in the accounts of the Salem trials. For instance, did you know that two dogs were killed because people thought they were bewitched?

In October of 1692, a dog in Salem was killed after it began to act strangely. The afflicted Salem girls claimed it was being ridden and tortured by the invisible spirit of John Bradstreet. John was the brother of Dudley Bradstreet, a Justice of the Peace from Andover who had refused to issue any more warrants to arrest alleged witches. After his refusal the afflicted girls accused Dudley himself of witchcraft. He and his family fled Essex County, as did his brother John, who fled north to Maine after the "bewitched" dog was killed.

A dog was also killed that month in Andover when an Andover girl claimed it was actually a demon in canine form. After the dog was shot Reverend Increase Mather, one of the colony's leading ministers, pointed out the absurdity of trying to kill a demon with a bullet. Clearly, he said, the dog could not have been an evil spirit since spirits cannot be killed. Sadly for the dog his protestations were a bit too late. 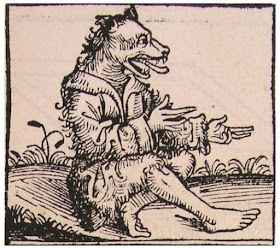 Animals of many kinds appear in local stories about witchcraft, usually acting strangely if not downright sinisterly. After ruling out natural causes, the early New Englanders had three explanations for why animals might act strangely.

The most common explanation was that they were bewitched. Witch trial documents and local folklore are full of stories about bewitched animals. Sometimes they sicken and die, but more often they just do weird things. Pigs jump high up in the air. Calves make unnatural noises and contort their bodies in strange positions. Oxen refuse to pull their wagon. Stories like these are found from the 1600s until the early 20th century, so its clear they were deeply embedded in the local culture.

Unfortunately, folklore says the best way to unwitch your animal is to physically harm it, whether by beating it or cutting off part of its body, like an ear or tail. Yikes! This is inhumane, but was grounded in the theory that witches cause mischief by sending their souls out of their bodies. A bewitched animal misbehaved because a witch's soul was temporarily inside it, causing an otherwise mundane farm animal to act strangely. Hurting the animal was supposed to also hurt the witch and cause their soul to leave the animal. I don't believe witches can send their soul into animals, but if you do hold that unusual belief please do not beat your animal. Or cut off its ear. Just sprinkle it with some salt or wave a sage bundle around it instead. You could even try holy water, but if it is a cat, don't bother trying because cats just don't change.

A witch's soul didn't always maintain human form when it was out causing trouble. It could take the shape of an animal as well. For example, in 1662 Rebecca Greensmith of Hartford, Connecticut confessed that when she attended the witches Sabbath one of her fellow witches flew there in the shape of a crow. In 1692 Katherine Branch, a serving girl from Stamford, Connecticut, claimed she was approached by a group of cats who briefly turned into women before resuming feline form. The cats were of course witches who were trying to recruit her to their devilish cause. According to a story from 1893, a Cape Cod witch named Moll Ellis could send out her soul in the shape of a bee, which emerged from her mouth when she slept.

Cats, birds, dogs, bees - their forms were many, but they all were intent on working evil. Unfortunately for the witch, their souls were vulnerable to physical harm when in animal form. A story from Clifton Johnson's What They Say In New England (1896) illustrates this. One night a miller from western Massachusetts left home to grind corn at his mill, despite urging from his wife to keep her warm in bed. While he worked at the mill a frisky black cat appeared, purring and rubbing against him. As he shooed the cat away it fell into the grindstone, which ripped off one of its paws. The cat disappeared with an unearthly howl. When the miller got home he found his wife in bed, moaning and looking pale. When he pulled down the coverlet he saw that one of her hands had been torn off, revealing her to be a witch. 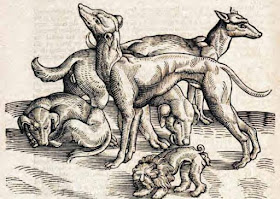 Animals that acted strangely might be controlled by a witch's soul or might even be a witch's soul in animal form, but the third explanation was the most terrifying. The Devil and his demons could assume animal form. That weird pig or twitchy dog might just be a spirit come from Hell to torment and trick the good Puritans of New England.

One of Salem's most famous accused witches, the slave Tituba, claimed that the Devil appeared to her both as a dog and a monstrous hog. The Devil must have liked pigs, because the citizens of Topsfield, Massachusetts claimed the Devil in the shape of a hog haunted a bridge over the Ipswich River until he was banished by a Puritan minister. Rebecca Greensmith saw the Devil in the shape of a deer, while in Salisbury, New Hampshire, ministers praying over a woman who sold her soul to the Devil were menaced by a large black cat that leapt at them from a tree. As Increase Mather noted, the Devil and his demons could not be killed in any form, but they could be expelled or banished.

Happily, we've made a lot of progress in understanding animal behavior. Be sure to love your animals, no matter how weirdly they act.


*****
I found the information about the bewitched dogs in Marilynne Roach's epic The Salem Witch Trials: A Day-By-Day Chronicle of A Community Under Siege (2002). It's an amazing if dense book that I recommend to anyone who wants all the details of the Salem witch trials. The other animal stories can found here on my blog.
Share